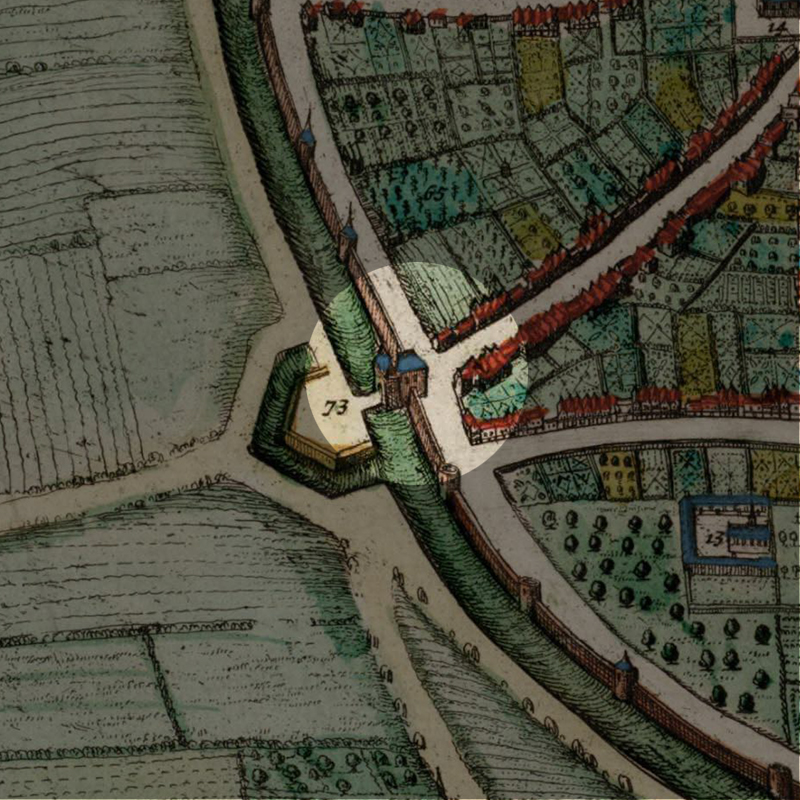 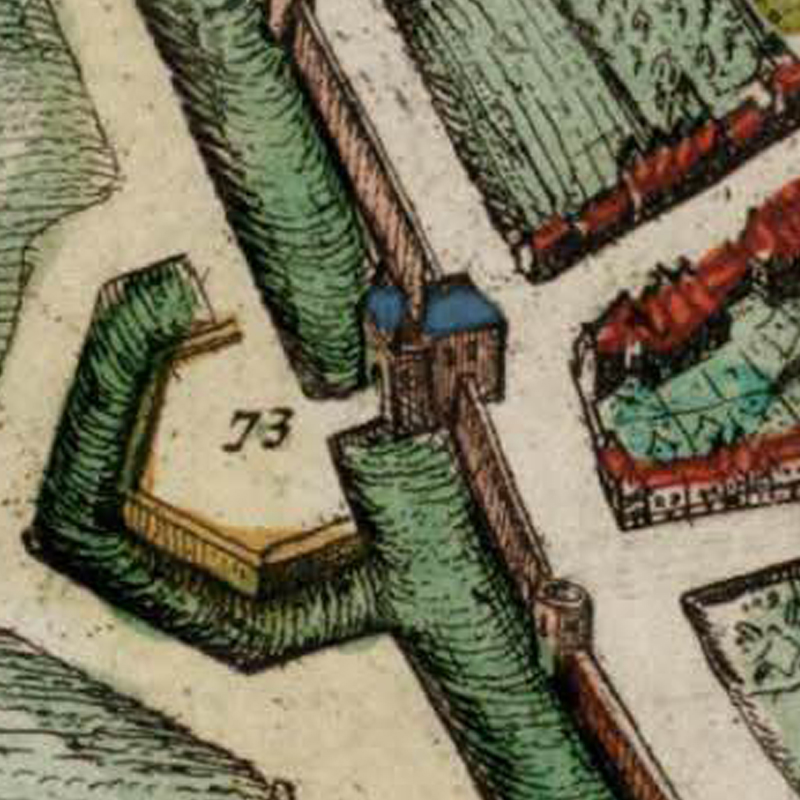 The City Gate of Many Names

With the exception of Parkpoort, all the outer city gates of Leuven did not keep their original names from the 14th century. But the Tervuursepoort seemed to be called by more appellations than one could count. And with good reasons.

When the Tervuursepoort was first built in 1358, it was called the Groefpoort. This was because the intra-muros street that led to it was known as the Groefstraat, today it is the Tervuursestraat. First recorded in the end of 13th century, Groefstraat was named after the stone furrows called ‘steengroeven‘ (cognate with the English ‘groove‘) located just outside the city gate all the way to Terbank. Groefstraat was a small narrow street – it still is today – that led from the Blauwe Hoek on the Brusselsestraat to the city gate.

But the Groefstraat was also called the Bankpoort. This was because the city gate led directly to the Priorij Terbank (Priory of Terbank) located just 1km outside the city.

Founded in 1197 by the Prince-Bishop of Liege, Hugo de Pierrepont, and the Bishop of Palestrina, Guy de Nuntius, the priory was run by Augustinian sisters who cared for Leuven’s sick and dying. A century later, the priory ran a successful leprosy colony, that served not only Leuven but the whole of the Duchy of Brabant.

There was a third name of the Tervuursepoort: Kasteelpoort (Castle Gate). This was because when one reached the Priory at Terbank, turning south would put you on the road to the Kasteel van Arenberg (Arenberg Castle).

The Most Renovated City Gate

This brings us to the next interesting point about the Tervuursepoort, that it was the most renovated outer city gate of Leuven and also because of its fourth name.

By the time the city gate was built, the Duke of Brabant had started spending more time in Brussels rather than in the capital Leuven. As a result, the Tervuursepoort that not only led to Terbank, but also westwards to Brussels was a dull reminder to the Duke of how the capital was less attractive. In 1384, a more impressive city gate was put in its place under the supervision of Hendrik van Sammen, drawn by architect Jan van Hove.

And in the 15th century, Leuven went on an overdrive to get the political support back. The university was established in 1425. As a response to Brussels’ new city hall in 1401, Leuven built its even more impressive one from 1439 to 1469, in addition to a Tafelrond. On top of that, the main city square was moved from Oude Markt to in front of the brand new city hall on the Grote Markt.

To welcome the Duke whenever he returned for a visit, the Tervuursepoort aka Brusselsepoort was torn down and completed renovated in 1426. The work, supervised by Sulpice van Vorst, was done in record speed from 20 April to October the same year.

The Terror Attack by Maarten van Rossum in 1542

Lord Maarten van Rossum (Zaltbommel, 1490 – Antwerpen, 7 June 1555) was the terrorist of the 16th century. He was the military commander of the Duke of Guelders (Geire) Karel. Born of Guelder noble descent, his family coat of arms featured three red birds on a silver shield and the motto was ‘Terror Terroris‘.

Living up to his family motto, he led the Gelders army to plunder and kill throughout the Low Countries for ransom and to satisfy his thirst for bloodshed. His aim was also to ensure the Duchy of Guelders together with the Bishopdom of Utrecht were not under the total control of the Holy Roman Empire like Brabant and Holland.

Maarten van Rossum’s name was synonymous with terror, as civilians suffered more than normal when he and his army attacked any Habsburg city.

On 15 July 1542, van Rossum declared war on Brabant. The moment he set foot on Brabantine territory, he set everything he saw on fire. His plan was to cross the River Maas, make his way to Leuven before setting further west. So when he reached Leuven, he actually did not manage to capture it.

Thanks for the constantly renovated and thus fortified Tervuursepoort, this city gate where van Rossum launched his attack held him off, despite suffering severe damages.

While the Maarten the Terrorist did not manage to destroy Leuven, its surrounding countryside, as in the case of Antwerp where he also attacked, was completely flattened. As a result, for a century that followed, the countryside of these two Brabant cities were more rural than two centuries before.

With the construction of another route to Brussels departing from the Wijngaert Poort, which was renamed the new ‘Brusselsepoort‘. The Tervuursepoort was awkwardly named the ‘Oude Brusselsepoort‘. No wonder a new route was plotted to link up Leuven and Brussels, as I can imagine it not being very pleasant for the successive generations of Brabant Dukes and citizens alike to pass by the leprosy colony all the time.

The even newer, stronger Tervuursepoort was thus born.

The Dutch Revolt was never really about religion. As we all know (hopefully), religion is but a political weapon to summon the masses.

The Siege of Leuven that took place from 24 June to 4 July in 1635, is known as the ‘Beleg van Leuven‘. During this time, the Sint-Pieterskerk remained open day and night, so that citizens could burn offerings to Mother Mary. The siege itself was composed of French and Dutch (at that time, the latter were known as ‘Protestants’) soldiers which tried to enter Leuven by water on the River Dijle via the Grote Spui. Habsburg troops based in Leuven prevented the entry.

The attackers then moved west to the Tervuursepoort and tried digging under it.

But the frequently renovated city gate was just too massive to fall to their digging. On top of that, the roots of the trees that topped the gate actually went deep into the ground (see below about the Seven Wonders of Leuven). So that didn’t work.

They then focused their attack on the next gate, the Mechelsepoort outside the Keizersberg, thinking that the ravelin at the Mechelsepoort was a weak spot. But by the time they arrived at the gate on 27 June, they were beaten off by ferocious Leuven women who were fighting alongside Habsburg soldiers and university students.

After being ravaged by ferocious Leuven women, the Franco-Dutch attackers were ambushed on the night of 29 June 1635 by Habsburg troops who stormed out of the Tervuursepoort, the Brusselsepoort and the Mechelsepoort, and the ambush was coordinated from Leuven’s tallest defense structure, the Verloren Kosttoren.

When the Holy Roman army from Namur arrived five days later at Leuven, the Franco-Dutch troops fled, thus ending the Siege of Leuven.

In the 1639 painting called the ‘Relief of Leuven’ by Peter Snayers, you can visualise the great defense capacity of Leuven in the 17th century with its outer city gates.

One of the Seven Wonders of Leuven

The Tervuursepoort was one of the famous Seven Wonders of Leuven. On the extra-muros side, the gate was guarded by a triangular ravelin and a deep moat.

After crossing into the first gate, one went through a grand arched arcade with two towering bastions, both topped with sharp tiled roof. Between the arcade and the city-side building was a courtyard. When one looked up in the courtyard, the city-side arcade was an even taller building with elms growing on the roof. One had to walk under the elm-covered roof to enter the city. The thick roots of the trees penetrated the walls reaching into the grounds below, thus the Tervuursepoort became known as one of the Seven Wonders of Leuven:

Unfortunately, after the French Occupation in 1789, Leuven started to lose its city gates. The Tervuursepoort was demolised in part in 1807, in 1829, and then completely in 1886.

In the 19th century, there was even a tramline that led directly to Tervuren right from the former spot of the Tervuursepoort.

Today, the Tervuursepoort is as unremarkable as a traffic junction can be. It is hard to imagine this used to defend Leuven from formidable attackers, twice in fact. And it was even one of the Seven Wonders. The next time you pass by the Tervuursepoort, imagine yourself walking through its massive stone arcade and under the roots of the towering elms.