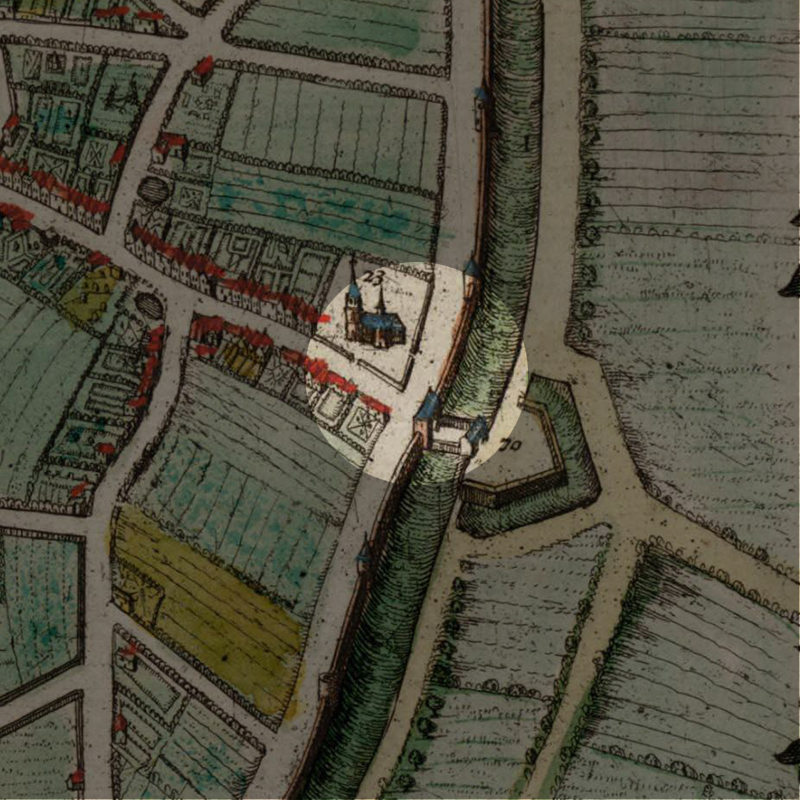 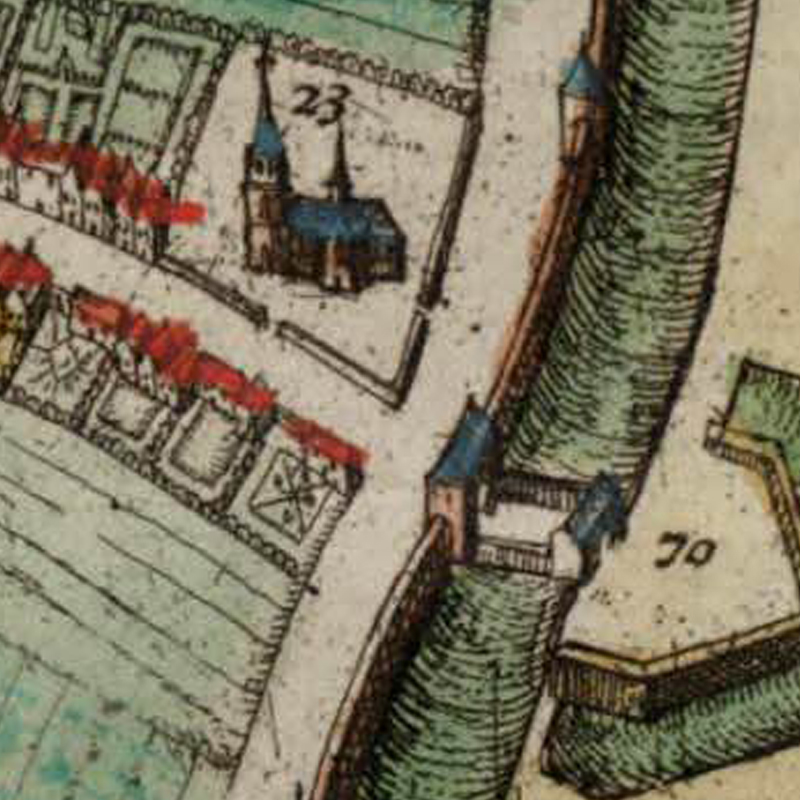 Before the 17th century, the road leading to the new and outer city gate of 15th century Tiensepoort from the first and old 12th century city gate of Sint-Michielspoort was known as the ‘Hoelstrate‘. When this new gate was built, it was simply called the ‘Hoelstrate-Buiten-Poorte‘ (Holestreet Outer Gate).

It was also known as the Onze-Lieve-Vrouwe-Poorte (Gate of Our Lady), after the Kapel van Onze-Lieve-Vrouw-ginder-buiten (Chapel of Our Lady Without the Walls) located just ‘inside’ the Tiensepoort. This was because the chapel used to be outside the first city walls.

Since the 17th century, the name ‘Tiensepoort‘ was used, together with the change in the name of Hoelstrate/Hollestraat to ‘Tiensestraat‘, as the main road outside the gate was called ‘Tiensesteenweg‘ since it led directly to the city of Tienen.

Little is known about the original Tiensepoort, except that it was constructed in 1357 under the supervision of Jan Hooren and Henrik Sammen. The city gate was accessible through a wooden drawbridge and it had a statue of the Holy Virgin in a niche above the entrance.

Whatever the construction was like, by the beginning of the 16th century, it was in a bad shape. The city magistrate decided in 1533 to rebuild the Tiensepoort.

Construction took a long time. From the laying of the foundation in 1534 to the finalisation of the works in 1539, the new Tiensepoort was again not usable 25 years later when the original 14th century wooden draw bridge had to be replaced.

After completion, the Tiensepoort was a gigantic massive defence gate that guarded a busy entry point into the city. With the moat outside the gate, it was extremely imposing, and without the ‘new’ wooden draw bridge that was still used in 1779, it was not possible to enter the city.

But as was the case with the other city gates of Leuven, the Tiensepoort was demolished in 1823. In its place, were erected two simple outposts that were similar to those still preserved at today’s Brusselsepoort.

In 1892, the Belgian administration turned a part of the outer city walls (the ‘Vesten’) into a tram way from the train station to Tiensepoort to Naamsepoort). It was first powered by steam and this was later changed to electricity in 1912.

The location of the Tiensepoort itself as you can see in the photos, was turned into a roundabout.

Today, the Tiensepoort bears no signs of its former massive 16th century city gate. It is just an ordinary-looking, uninspiring traffic junction.