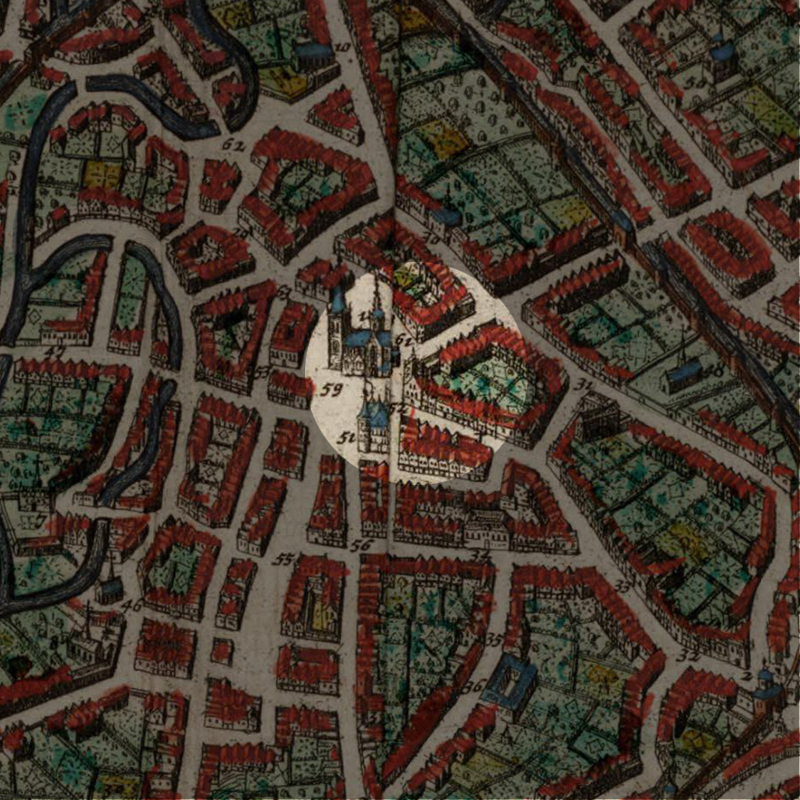 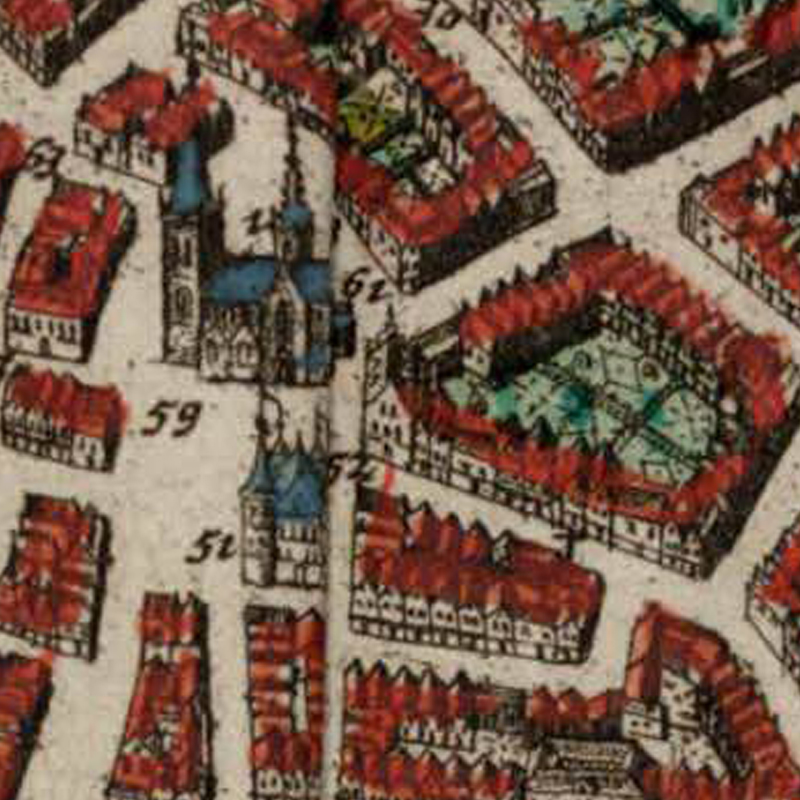 The rivalry with Brussels

The story of the Tafelrond goes back to the 15th century. It started with Leuven’s rivalry with Brussels: Leuven was formerly the capital of the Duchy of Brabant. But in the second half of the 13th century, the successive Dukes preferred Brussels as their residence and gradually, the centre of power shifted there.

Perhaps as part of the attempt to not allow Brussels to further overshadow itself, Leuven established its famous university in 1425 and within the context of this rivalry, moved its city hall to a different location opposite the Sint-Pieterskerk where it built its magnificent building (1448-1469) on the new ‘Grote Markt‘. This move was also a direct answer to the equally magnificent Brussels City Hall built in 1401 complete with belfry towers.

As part of this move, the city administration of Leuven decided around 1479, to build a magnificient building for the citizenry to complement the new Stadhuis.

On the side of the Grote Markt, flanked on the right by the Stadhuis and the left by the Sint-Pieterskerk, three houses were torn down – “Sint-Joris” (St George), “Taefelront” (Round Table) en “Spaegnen” (Spain). The name ‘Tafelrond‘ was chosen to call the new building.

The new Tafelrond was actually not meant for every citizen. It held meeting rooms for well-to-do families, the guilds (certainly the wealthy archers’ guild) and the ‘rederijkerskamers‘ – Chambers of the Rhetoric – which were drama societies unique to the Low Countries in the 15th-16th centuries indulging in theatre and lyrics.

Building started in the year 1480, under the leadership of Leuven’s famous architect Matheus de Layens (who also designed the Stadhuis), and taken over by Jan de Mesmakere in 1487 when the former died.

We only have a painting by Wolfgang De Smet (1617-1685), lithograph by G. Welis from 1892 but based on a 17th century painting, and a lithograph by L. Van Pethegem from the 19th century. It looked like a smaller version of the Stadhuis with simpler ornaments and less details.

It was known that there was a bas-relief of King Arthur and his Knights of the Round Table on the facade done by Jan de Bruyne, as a reference to the Chambers of the Rhetoric.

After a fire in 1553 and renovations in 1556, Pierre Walraven, master mason of the city, installed a wooden bell-ringer in the centre of the roof.

After centuries of neglect, the 15th-century Tafelrond was in a derelict state in the beginning of the 19th century. At a city council meeting on 25 October 1817, the city decided to tear down the building, following the advice of architects Claude Fisco and Jacques Verheyden.

But there was no certainty about what building to erect in its place. So the city decided to plaster the whole thing up in white and made it look neo-classical, under the guidance of Brussels architect Charles Van der Straeten. From 1829 to 1832, the Tafelrond was rented out to the ‘Société de l’Académie de Musique‘ for its concerts and theater performances under a beautiful domed hall with 980 seats.

In August 1914, the Tafelrond was completed destroyed by the German bombings.

There was no doubt amongst all the planners of the reconstruction that the rebuild should be that of the original 15th-century Tafelrond by Matheus de Layens. That was the original intention of the Leuven city when it decided to tear down the building but had turned it into a neo-classical disaster because it had no money. The Union of Belgian Cities only agreed to the Gothic rebuild on the condition that it is of the highest quality.

Then came the National Bank of Belgium, who agreed to rebuild the bank on its own costs, provided that the building became its new quarters in Leuven.

In typical Belgian cronyistic style, the head architect was Maxime Winders (1882-1982), who was already responsible for the building of several of the National Banks’ offices in Antwerp, and who just happened to be married to the daughter of the Director of the National Bank.

The design followed a 17th-century painting of the original Tafelrond stored in the Stadhuis. After years of back and forth, much to the frustrations of Leuven citizens, the works finally started in 1926.

Curiously, someone – we do not know who – decided that the sculptures would not represent King Arthur and his Knights, but the two central figures were King Albert and ‘The Virgin of Leuven’ (possibly De Fiere Magriet). They were delivered by Leuven sculptor Joseph Van Uytvanck.

The building was open for business in 1930, although works continued right into 1937.

In the night of 10 May 1944, the Tafelrond was severely bombed once again.

The building was completely on fire and the facade was completely ruined. The reconstructions were only completed in 1947 after the war, and the ruined facade remained unchanged. The interior however, was completely replaced with concrete floors. In the 1980s, architect J.M. De Vos carried out further renovations, with extensions along the Tiensestraat and the Eikstraat.

There is a building left the south portal of the Sint-Pieterskerk on the Grote Markt called ‘Klein Tafelrond‘. It is now occupied by the restaurant Agora. Back in 1719, it was actually called ‘die Schoone Lieve Vrauwe‘ – Our beautiful Lady (Virgin Mary) and it dates from the 17th century. However, it is not known when it started to be called the small Tafelrond.

Eikstraat: From Poplar to Oak

The tiny cobbled alley to the right of the Tafelrond is called Eikstraat (Oak Street).

At the end of the 14th century, this was however known as the ‘Papeleurstrate‘, or ‘Populierstraat‘ in modern Dutch. In English, this meant ‘Poplar Street’.

Later the name ‘Papeleurstrate‘ somehow lost its place to the name ‘Christusstrate‘ (Christ Street). But from 1484 onwards, it earned the name ‘Eyckenstraet’ (Oaks Street).

There’s an interesting story behind this. There was a house called “d’Eycke” , that originally stood behind the city hall. But its name plate was given to the cornerhouse at the current Eikstraat and Boekhandelstraat.

Since then, the Poplar Street became the Oak Street! And this has remained until today.

The Eikstraat leads to the ‘Moriaenshooft‘ that was part of the College van Luik.

With the departure of the National Bank, laid the Tafelrond in disuse. Work began in the 2010s to freshen up the place.

In 2016, a luxury hotel opened on the site called The Fourth – referring to the fourth reincarnation of the Tafelrond.

Its restaurant, aptly called the ‘Tafelrond‘, reminds us of the original motif of the building – King Arthur and the Knights of the Round Table.

Tafelrond and The Fourth hit the news when the Sultan Qaboos of Oman booked the whole place from December 2018 to end of January 2019 on a secret visit. He was in the city seeking treatment at the Leuven University Hospital. But he did not stay long. Soon after his visit to Leuven, he passed away.