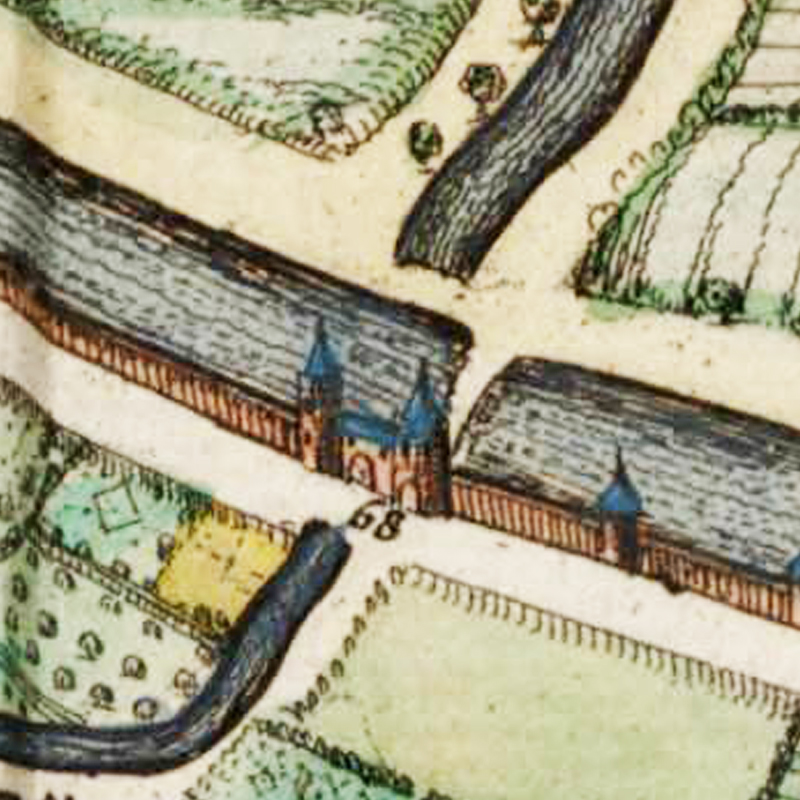 Built in 1361, the Aarschotsepoort was initally called the ‘Utlake-Poorte‘, referring to the ‘Utlake‘ – a small lake located just outside the gate. This is because when the Dijle flowed northwards, it first formed a lake here which was integrated into the moat of the outer fortification.

From the 16th century onwards, it was called the ‘Sint Jobs-Poorte‘ (St Job’s Gate). This is because it was through this gate, that pilgrims had to pass through this gate when traveling to the nearby church in Wezemaal to worship a miraculous image of St Job. The pilgrimage was so popular, that an image of St Job was cast and placed in a niche above the entry gate.

After the Leuven-Dijle Canal was laid in the mid-18th century, the Aarschotsepoort also became known as the ‘Vaert-Poorte‘, meaning Canal Gate, or ‘Porte du Canal‘ in French.

We do not know much about the appearance of the first Aarschotsepoort, except that in 1364, a small building was added to it containing a staircase that led to the ramparts connecting to the Diestsepoort towards the East. A decision was taken in 1515 to demolish and build a new Aarschotsepoort. Work commenced on 20 July 1517, led by architect and sculptor Mathys Keldermans.

The new building was completed in 1519, and it was crowned with a stone lion measuring two and a half feet. A golden wind vane and ten gilded globes decorated the summit of this edifice. There was a bridge in front of the Aarschotsepoort to cross the moat and another across the River Dijle itself (see Het Spuigat below).

The River Dijle flowed under the Aarschotsepoort out of the city into the Utlake, before it continued northwards.

The Kanaal Leuven-Dijle (Leuven-Dijle Canal) was dug to enlarge the inland waterways between Leuven, Mechelen and Antwerp. The River Dijle that flows, with its many arms through Leuven, was and still is the river that brought life to the city. It was an important water trade route that made Leuven a major trading post since 1327.

The establishment of the canal, that runs parallel to the Dijle, aimed to increase the capacity and volume of the water transport, and bring it into the 18th century industrialising Belgium.

Because of the Leuven-Dijle Canal, the Dijle had to be rediverted to run east of its normal course before and after exiting Leuven – running alongside its daughter river called the ‘Vunt‘ or the ‘Leibeek‘ (see below). The moat that used to be a lake was now filled up and a harbour known today as Vaartkom (see Het Spuigat below) was constructed to link to the canal, west of the Aarschotsepoort within the city walls, to facilitate the loading and unloading of goods.

While the Aarschotsepoort itself was demolished in 1776, the canal has hardly changed. The whole canal infrastructure is protected since 1997 as Belgium’s industrial heritage.

Many people know that when the River Dijle enters Leuven, it goes through the ‘Grote Spui‘ (The Big Watergate), which still exists. The River Voer, being a smaller river, enters via the ‘Kleine Spui‘), which also still exists.

The Dutch word ‘spui‘ is cognate of the English word ‘spew‘, which is closer to the original meaning of the source word which refered to ‘water coming out of the mouth‘ (of a person or otherwise).

But not many people know that when the Dijle leaves the city, it also used to pass through two other watergates, which do not exist anymore:

Het Spuigat – where the basin of the canal is which also functions as Leuven’s harbour, nowadays used for yachts, was where the River Dijle passed through a spacious arcade, that used to be called ‘Het Spuigat‘ (Literally ‘The Spew Hole’). There used to be a drawbridge across Het Spuigat in the 16th century, right by the Aarschotsepoort. Nowadays, this bridge has been replaced by two bridges: the ‘Wandelaarsbrug which is an iron drawbridge, while the ‘Marie Thumas Durieuxbrug‘ is a recent addition in 2019.

Het Nieuw Werk – this is part of the outer city fortification east of the Aarschotsepoort. After the completion of the Canal, Het Spuigat became the Canal habour but the water is cut off from the rest of the river while the Dijle just outside the city became the Canal. So the Dijle itself had to be diverted taking another route parallel to the Canal. Meanwhile, there is already another river exiting Leuven, which is a new River Leibeek formed from the Dijle inside Leuven, called the ‘Vunt‘ nowadays. On the 1649 map, you can see the Leibeek/Vunt going through a fortified arcade before it travels out of the city. This was called Het Nieuw Werk (The New Fortification). Nowadays, both the diverted Dijle and the Vunt go underground into the property of beer producer Stella Artois. Rumour has it that the beer uses the water from both rivers, which is why it became the world’s best-selling beer!

The Aarschotsepoort has completely disappeared from Leuven’s cityscape, and even its location is vague. But the previously industrial and poor area before and along the canal is now being developed into a posh district of Leuven.