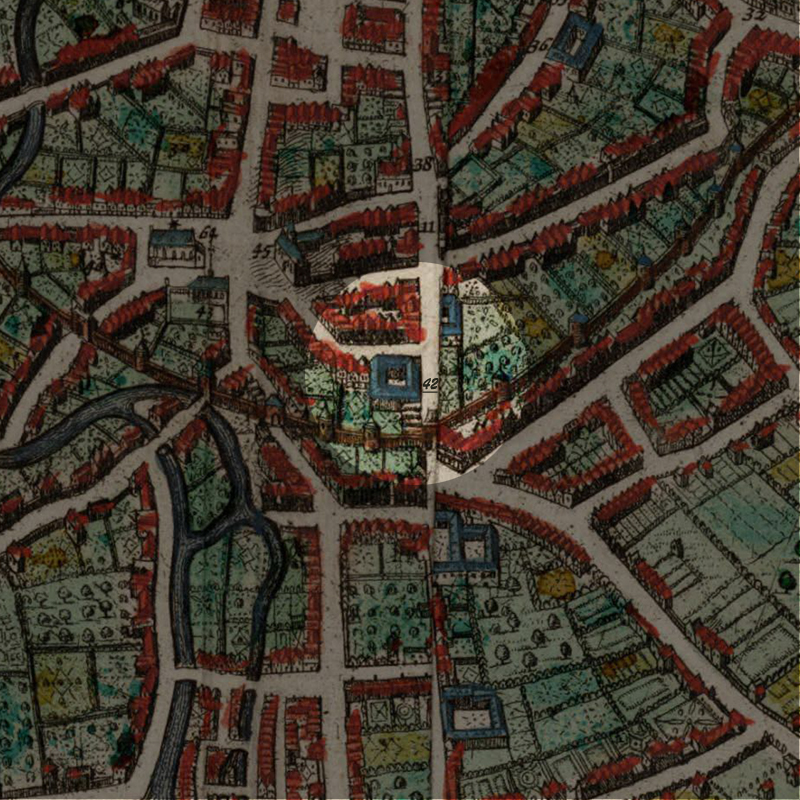 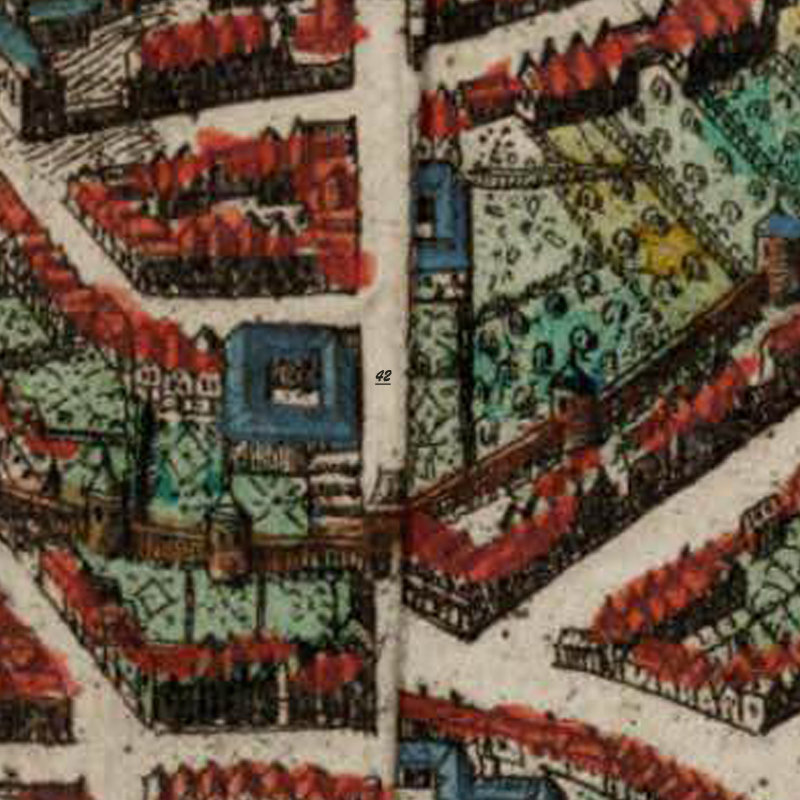 For the family and friends from Antwerp

The Van Dalecollege, like many of the other colleges in the Old Leuven University, was founded for students of a particular region elsewhere in Europe. Founded by a priest Pieter van Dale (1504-1582) in 1569, the Van Dalecollege was reserved for students with lesser means from the city of Antwerp further north from Leuven but still within the Duchy of Brabant. Van Dale himself was Canon of the Cathedral of our Lady there and also the Dean of the St Martin’s Church in Aalst in the County of Flanders.

Van Dale bought a deep house located in the current-day Naamsestraat and began expanding from there. Today, the late Middle-Ages building along the ‘Raamstraatje‘ alley still takes the form of the original 16th century house bought by Van Dale.

The Van Dalecollege expanded between 1569 and 1572 southwards, so that it took a square cloister form with an inner courtyard, as can be seen in an engraving from 1606 by J B Gramaye. This shape is the one seen in this map from 1649.

The facade on the Naamsestraat is from 1668, as can be attested by the markings above the main entrance.

The Return to the University

During the French invasion, the Van Dalecollege was abolished together with the rest of the Leuven University. The invaders turned it into a ‘Hideout and Workplace for Charity‘ attached to the public social administration. Its gardens were filled with workshops and even contained sleeping quarters for a foundation for seniors. After the Second World War, the whole place was turned into a girls’ school. Then by 1971, after 10 years of neglect, the Van Dalecollege was acquired by the new university which put the site through a series of renovations – to remove all damages to the site after the French arrived.

Again in 2005, the KU Leuven proposed a series of restoration work which is slowly being carried out.

Today, the Van Dalecollege is part of the university once again and functions as its centre for student services.

The Van Dalecollege occupies the highest point of the inner city of Leuven. Its southern wall actually follows the old city walls of Leuven right to the city gate of Wolvenpoort on the Schapenstraat. Today, you can explore the tiny park where a small path down the hill and westwards leads you right to the spot where the old city gate used to stand. You can still see the two wolf sculptures there recovered from the 11th-12th century gate.

Historians have a good idea of how the garden used to look like, thanks to a waterpainting from 1577 and that 1606 engraving of Gramaye. It was a beautiful peaceful retreat, divided neatly into three areas, against the backdrop of the old city walls. The garden was not only filled with flowers but also with apple trees and vineyards to make wine.

On 14 May 1630, the judge permitted the management of the Van Dalecollege to demolish the old city wall at a length of 50 feet along the property’s southern borders, on the condition that they replaced it with a new wall at their own cost. A few years later, on 19 May 1642, he also granted them the permission to use the existing slots of the city wall in their garden to reconstruct the parts that have already crumbled down.

Nothing was recorded as to whether work to replace the walls or to repair the crumbling walls actually took place, but the inevitable happened. The part of the wall linked to the Wolvenpoort fell on 31 September 1683 at around 8pm. The house attached to the gate was crushed, killing five persons including a mother with her suckling baby.

Between the permission and the accident, 53 years went by. The tragedy would not have happened had the walls been repaired early enough. Some things never change…

If you walk along the southern wall in the forested area of the park, you can still see the foundations of the old city wall.

The 16th century chapel and the tombstone of Pieter van Dale

The chapel located in the Van Dalecollege dates from 1571. While most of the interior is from the 18th century, the 16th century structure and bricks are one of the best preserved of all colleges in Leuven.

The marble tomb of the college’s founder Pieter van Dale was apparently still in the floor of the chapel, except that it has been covered by cement and tiles during the works in the 1970s (!).

The Van Dalecollege is the centre for student services of the KU Leuven. The parks attached to it are one of the most peaceful and pleasant spots in the city.