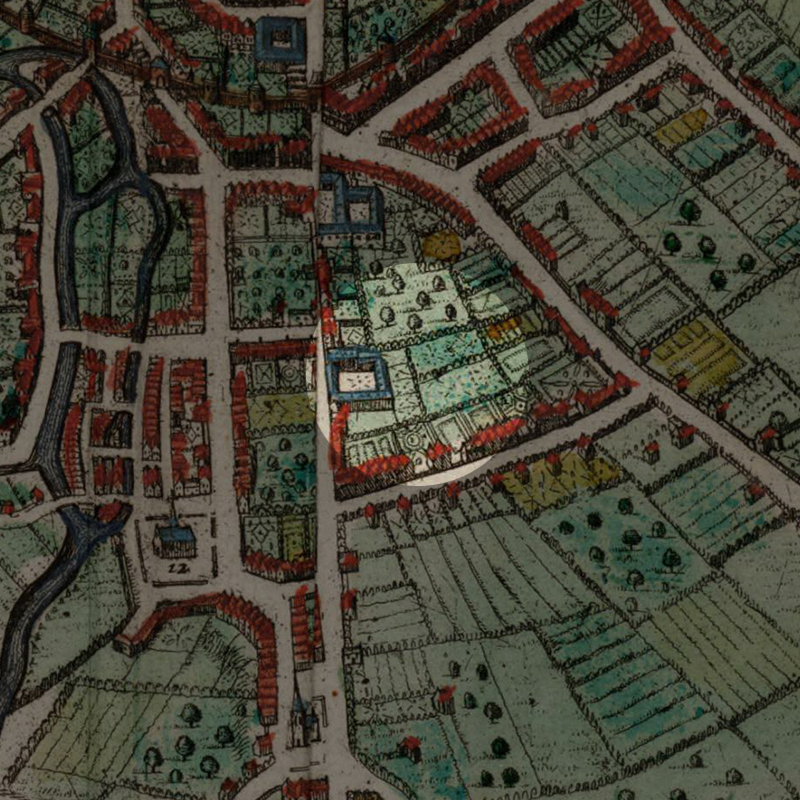 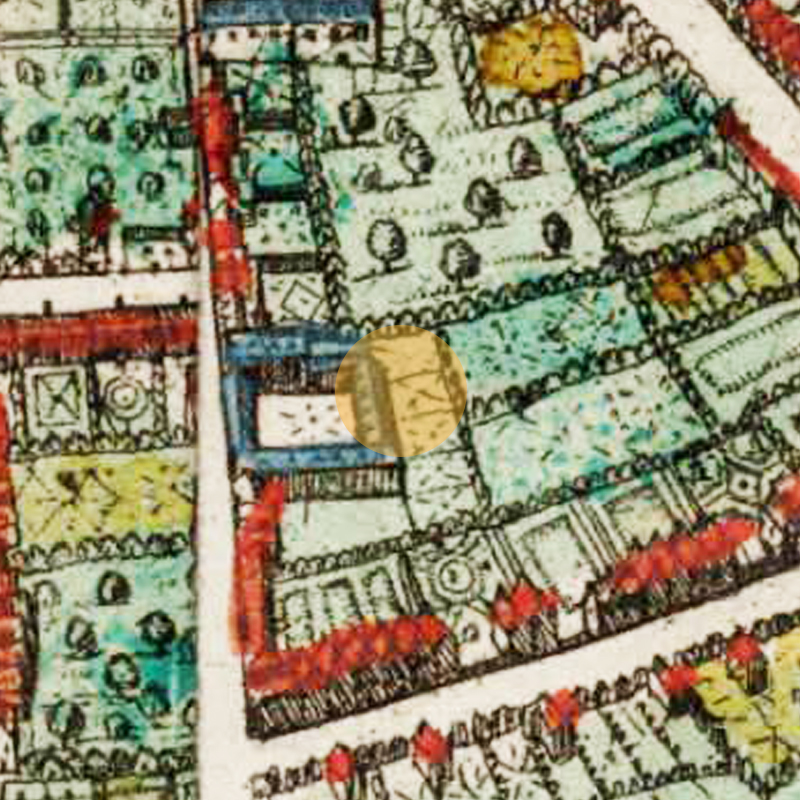 1612: The Not-So-Silent Arrival of the Discalced Carmelite Friars in Leuven

According to the archives, the Discalced Carmelite Friars arrived in Leuven in 1612 after the founding of their college was approved by the Archdukes in 1611. They were under the instruction of Father Thomas a Jesus (Dio Sanchez d’Avila) a Spanish Carmelite priest, to form a community here in order to train novices for the whole province. The site of their monastery (which is more a college) was the former refuge house of the Abbey of Boneffe from 1598.

Soon after, this community became known as “Tacet“. Why “Tacet“? The word means in Latin “(it) is silent“. This could refer to the strict contemplative life that the Carmelites preached.

But the religious life of this community of Carmeliate friars was anything but silent. With rapid growth of the training need, the friars founded another monastery in Leuven known as “Placet“. Thus there were in the 17th century two communities of Discalced Carmelite Friars in Leuven:

The brothers from Tacet (St Joseph) were known as “Onze-Lieve-Vrouw Broeders” (Brothers of Our Lady), while those from Placet (St Albert) were simply the “Ongeschoeide Karmelieten” (Discalced Carmelite Friars). Nevertheless, both communities were closely related, for obvious reasons.

It was recorded that on 5 April 1621, the Carmelites of Leuven celebrated with much pomp and fireworks the canonization of their Saint Teresa of Ávila by the Pope. A huge procession was organised through the city and it was accompanied with much fanfare.

The compound of Tacet stood along the Naamsestraat and it bordered the Parkstraat at the back.

The church, which was dedicated to St Albert, was said to be elegant according to historian Edward van Even. There were three altars, one of which contained a painting by Gaspar de Crayer. In 1783, on a visit to Leuven, the author of “Voyageur dans les Pays-Bas Autrichiens” claimed to have been captivated by this painting, which featured St Teresa at the feet of Our Lord.

Indeed, the Klooster van de Ongeschoeide Karmelieten van Sint-Albertus remained in silence for the centuries that followed, until 27 November 1796 when it was banned. At that time, Tacet had 16 friars including the prior Jeroen de St Cornelius (vanden Plas). While normally, with the sale of their monastery, the friars would have received funds for their retirement. When the property was put on auction in 1797, the friars gave their compensation to two Jacobins, Bastiné and Pierlet, who promised to help them repurchase the monastery with the money. After the acquisition of the compound, the two cheats never handed it over to the friars. The buildings were rented out to the mistresses of French revolutionaries during the French occupation. After the departure of the French, the buildings were torn down and private houses were built over. There was no news thereafter of the famous paintings of the former church.

1875-now: The Transformation into a Hospital

In 1875, the Sisters of the Congregation of the Holy Family from Eupen arrived in Leuven. With the aim of caring for the sick, it took them some years before they founded a clinic on the site of the former Tacet monastery in 1899, not on the side of Naamsestraat but along the Parkstraat. The clinic had 16 rooms.

With the founding of the Congregation of the Franciscan Sisters in 1922, the health services provided by the nuns grew exponentially. By 1973, it was taken over by the state and renamed the Heilig-Hartziekenhuis (Sacred Heart Hospital). The hospital still exists today.

Interestingly, on the inner court of the clinic, beside the chapel were the remnants of the main 17th century building of the Tacet monastery. But on 19 June 1963, the roof of the chapel collapsed and the whole building – including the historical remnants – were broken down and removed in 1967.

Between the site of the clinic and the northern side of the original Tacet compound along Naamsestraat was a bell factory Van Aerschodt in 1842. The factory used to cast giant church bells and it was burnt down in 1895. In 1899, the site was acquired by the state and became a public school for boys known ‘Stadsschool n°6’. Along the Naamsestraat where the entrance of the monastery used to be located was a large private house with an huge entrance gate. This too was integrated into the school and became the principal’s house (Directeurswoning). This is why the school building itself was called the ‘Klokengietershuis‘ (Bellcaster’s House).

When the hospital expanded, the school was disbanded and integrated into the hospital compound. The Klokengietershuis was a protected monument and is still used by the hospital. The principal’s house however was broken down. However, the facade of the house as well as the entrance gate still remain. They serve as the main entrance to the modern-day Heilig Hart Leuven Regional Ziekenhuis.

The street opposite the hospital – Karmelietenberg – was actually named after the new Klooster van de Ongeschoeide Karmelietessen  (Order of the Discalced Carmelite Sisters) who moved into this street in 1839, NOT after the Tacet Carmelite Friars.

In the Middle Ages, this road was called ‘den Goeden Hollenwech‘ – the Good Holloway. This was one of the paths where for centuries, people crossed from the upper town (of Naamsestraat) to the lower town (used to be ‘Benedenstraat‘ but nowadays called ‘Schapenstraat‘) to fetch water. With erosion, these paths from upper to lower town became holloways. The ‘Sneppenberg‘ (today’s Sint-Beggaberg) was called the ‘Cleynen Hollenwech‘ (Small Holloway). The road beside the Arenberginstituut known as ‘STUK’ nowadays is now cut off, and it used to be called the ‘Kwaden Hollenwech‘ (Evil Holloway).

So on the right of the Karmelietenberg was the Aulnecollege, now the Amerikaans College (American College). On the left, was the ancient house of the Schotte, where the new Klooster van de Ongeschoeide Karmelietessen existed from 1839 to July 1973 when they moved definitively to Court-St. Etienne.

After the departure of the Carmelite sisters, the city tore down the convent to build a carpark for the Heilig-Hart hospital right opposite. Today, the carpark is underground and residential blocks are built above. There is absolutely no trace of the former House of the Schotte family nor of the 19th century convent.

From 2021-2023, the Heilig Hart hospital is undergoing renovation. As part of the works, archaeological digs took place and remnants of “Tacet” Klooster van de Ongeschoeide Karmelieten van Sint-Albertus were discovered under the former bell factory. Further digs are taking place throughout the whole site to look for other remains.

Site of the bellcaster, under which laid the foundations of 17th century Tacet monastery.
Inside the school building.
Boys School No. 6
The Principal's House can still be seen on the left. The former entrance of the house is now the entrance to the hospital.
VIEW ALL LOCATIONS OF OUD LEUVEN