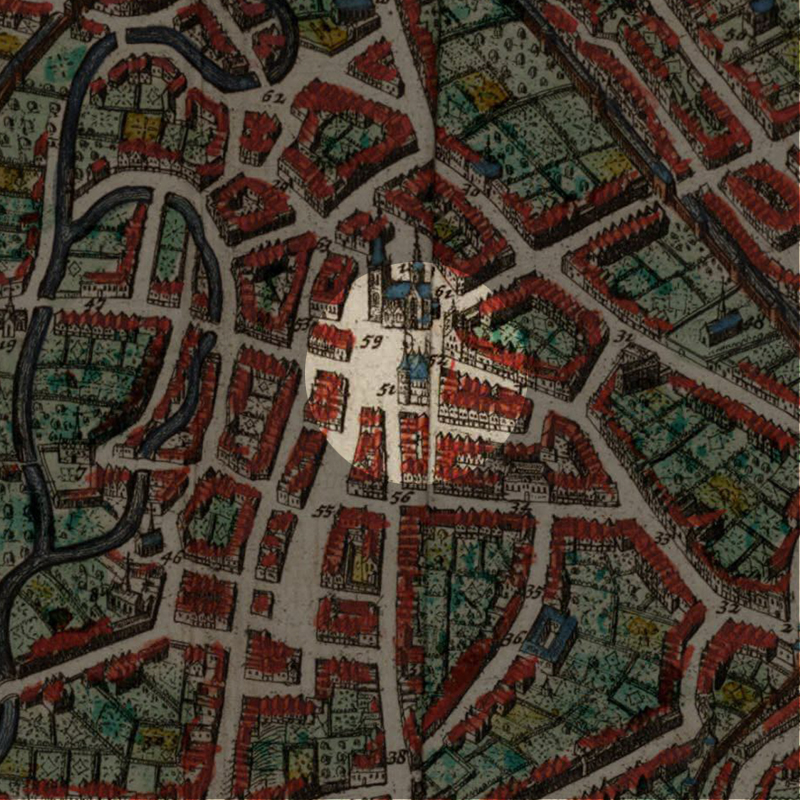 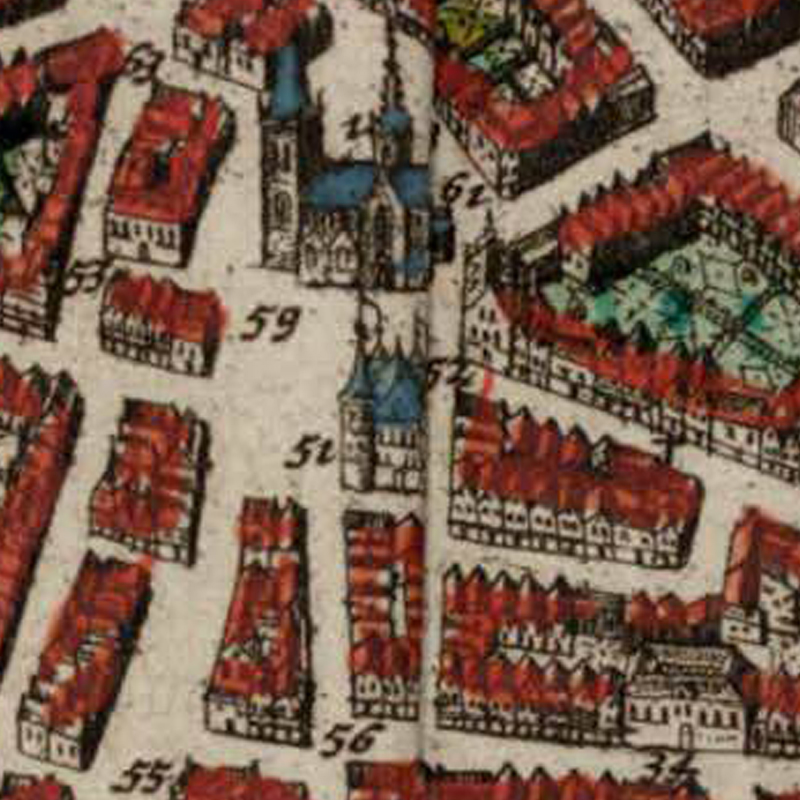 Leuven was formerly the capital of the Duchy of Brabant. But in the second half of the 13th century, the successive Dukes preferred Brussels as their residence and gradually, the centre of power shifted there.

This shift was never reversed, resulting in Brussels being the capital of Belgium today.

Perhaps as part of the attempt to not allow Brussels to further overshadow itself, Leuven established its famous university in 1425 and within the context of this rivalry, moved its city hall to a different location opposite the Sint-Pieterskerk where it built this magnificent building. This move was also a direct answer to the equally magnificent Brussels City Hall built in 1401 complete with belfry towers.

The general appearance of the Leuven Stadhuis was inspired by the city hall of Bruges, one of the oldest in the Low Countries.

The oldest part of the Leuven Stadhuis – the backhouse – was built in the years from 1439 to 1445 by Sulpitius van Vorst and Jan II Keldermans. The famous fronthouse with its magnificent facade on the Grote Markt, was built between 1448 and 1469 under the leadership of Matthijs de Layens, Leuven’s renowned architect. The attached conservatory along the Naamsestraat was built in 1461. The other youngest wing along the Muntstraat was built only in 1938. Originally not part of the city hall, the “Dekenij van de lakenwevers” – the Weavers’ Hall – built in 1680 was later added to the complex.

Matthijs de Layens gave the Leuven Stadhuis a beautiful facade that took every citizen’s breath away. However, there were two things he could not change: the tiny entrance and a empty facade.

It was only until 1709 when the grand entrance was finally built, with the stone staircases leading to it, which survive until this day.

Also the biggest change came in the period of 1849-1880 where the empty niches were finally filled with sculptures. The call came first and foremost from French writer Victor Hugo, who was then living in Brussels in 1852, who decried ‘Meublez les niches!‘ – Fill the Niches!. This call lasted until 1881 when it was decided that the statues need to reflect Leuven’s history. City Archivist Edward Van Even and Historian Charles Piot were brought in to provide the list of historical figures.

The result: A total of 236 statues now fill the niches.

They were dressed in the costumes of their own times. The lowest level statues feature Leuven’s academics, artists, thinkers and other historical figures. The first storey features community heroes and saints of Leuven’s parishes. The second storey features Leuven’s rulers, including the Counts of Leuven and the Dukes of Brabant, all the way to King Leopold II in the 19th century. The niches in the towers were only filled in 1895-1913 with biblical figures.

The exterior of the Leuven Stadhuis is uniformly Late Brabant Gothic. Its interior however is a mad mixture of various different styles. There are three saloons: one in Louis XIV, one in Louis XV and the last in Louis XVI. In one of the saloons, the walls are filled with every single Leuven mayor since the French invasion, except the current mayor Mohamed Ridouani.

Perhaps one of the most easily-missed yet highly-valuable treasures of the Leuven Stadhuis are the oak beams in the groundfloor halls, carved by the famous Brabant wood sculptor Willem Ards (1415-1453).

The oldest part of the Leuven Stadhuis is in fact its cellars. Directly accessible from the Grote Markt, the cellars belonged to the three houses which were torn down to make way for the ‘fronthouse’ back in 1439.

The west cellar is known in historical sources as ‘de Meyerse kelder onder tFederhuys‘. The two bays under the fronthouse are covered by a four-part rib vault on semi-column pillars. The remaining part of the cellar under the Grote Markt is supported by a barrel vault, perhaps introduced in the 15th century during the reconstruction of the new Grote Markt (then called the ‘Plaetse‘). The second cellar belonged to a house called ‘De Moor‘, with a barrel vault parallel to the Grote Markt. The easternmost cellar was that of the former ‘Rosenhoet‘ house, which is located partly under the fronthouse, partly under the Grote Markt.

The ‘Meyboom‘ – the Tree of Joy – is the Low Countries version of the English ‘Maypole’, that has an ancient history in Germanic culture dating back to the Iron Age.

The rivalry between Brussels and Leuven as mentioned above, actually began with the erection of the Meyboom in 1213, even before the move of the Duchy Residence to Brussels.

The legend goes that at a wedding that was being held at the inn called “Het Cattenhuys” located in the Zwanenbroek (current-day Broekstraat) just outside the Brussels city walls in 1213, a fight broke out between people from Leuven and people from Brussels. Allegedly, the Leuven inhabitants were present because the groom was from Leuven. The brawl broke out because the Leuven inhabitants were upset about the beer tax that Brussels city administration imposed within the city.

Incidentally, the Crossbowmen of Brussels called the ‘Gezellen van Sint-Laurentius‘ (Companions of Saint Lawrence) were present and managed to break up the fight. As a reward, the Duke of Brabant Jan III accorded them the status of a guild. With this new status, they received the right to join the Covenant of Oaths as permanent members and were also entrusted with the right to plant the Meyboom in Brabant. It was decided that the planting would take place on the eve of the feast of St. Laurentius, the Archer Saint, on 9 August. It was not until 1308 that this event truly took shape, where the Meyboom was planted every year that day by five o’clock in the afternoon at the intersection of Rue des Sables/Zandstraat and Rue du Marais/Broekstraat, site of where the brawl with Leuven broke out.

But there was a catch: Duke Jan III said, whoever that plants the Meyboom at five o’clock will receive the right to do so the following year.

Leuven did not forget the humiliation suffered at the hands of Brussels since 1213. In 1974, a group of men from the Brotherhood of Men from 1929 stole the Meyboom from Brussels and erected it on the Grote Markt in front of the Leuven Stadhuis before 5pm on 9 August.

Since then, Leuven has officially taken over the right to erect the Meyboom, a task undertaken by the Brotherhood of the Men from the Years ending with 9. Brussels vehemently denies their Meyboom was stolen in 1974 and continues to plant its own.

Every year, the erection of the Meyboom is one of the most significant local cultural events to take place in front of the Leuven Stadhuis.

The Leuven Stadhuis is one of the most beautiful buildings in Belgium. It will soon undergo a renovation with the final move of the city administration to the new building by the train station. The Leuven Stadhuis itself will be turned into a museum and activity centre for the city’s inhabitants.