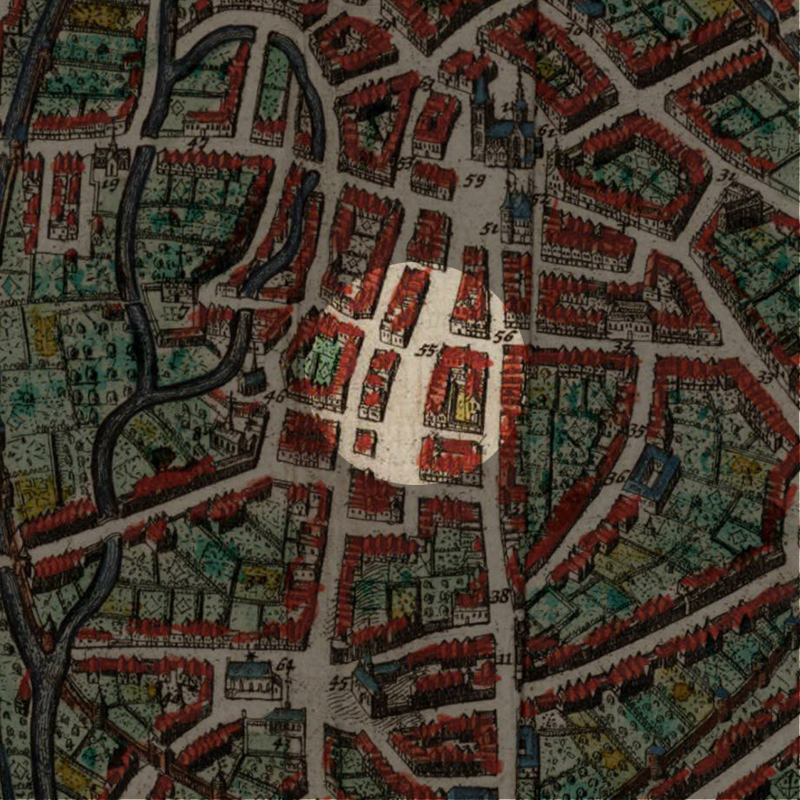 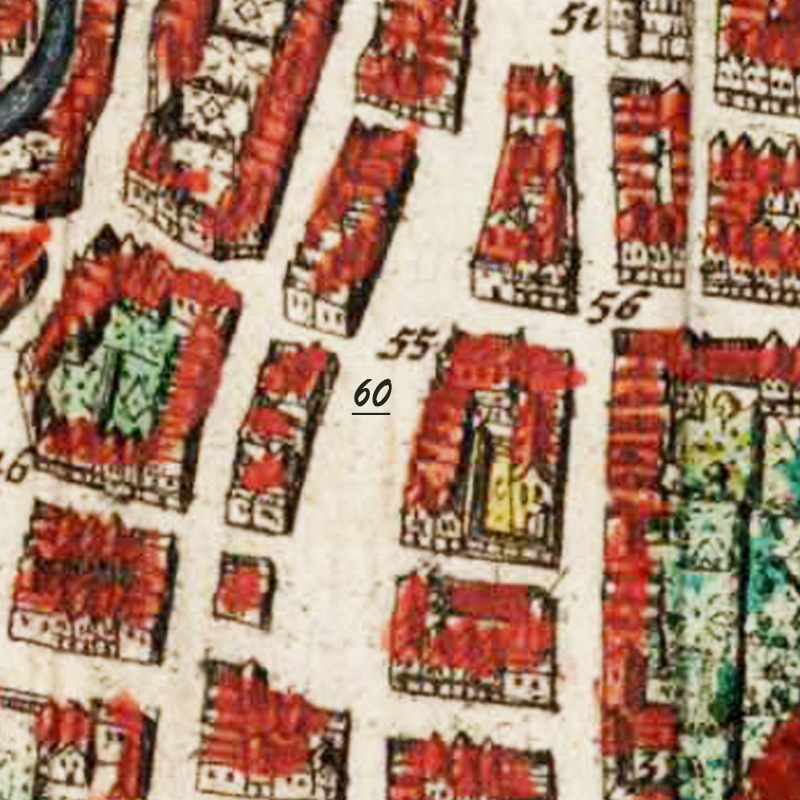 The Oude Markt was actually Leuven’s original “Grote Markt” – its main city square. It had always been the centre of Leuven, with its first city hall (Stadhuis), close to the city’s Korenhuis (grainhouse), Waag (weighing house) and the Lakenhalle (cloth hall).

Renamed but not replaced

When the new Grote Markt was built on top of the cemetery of the Sint-Pieterskerk in the course of the 15th century, together with the erection of the new Stadhuis and the Tafelrond, Oude Markt still retained its economic importance, as many of the markets were still located around it.

Meanwhile, the Oude Markt was also called a variety of names:

In fact, the Oude Markt’s economic activities continued well into the 1970s.

This is quite phenomenal considering its continuation since the 14th century! Every week, there were 3 different markets on the Oude Markt, including the largest of them all, the Friday Market. It was only towards the turn of the 21st century that this moved to the present-day Ladeuzeplein. 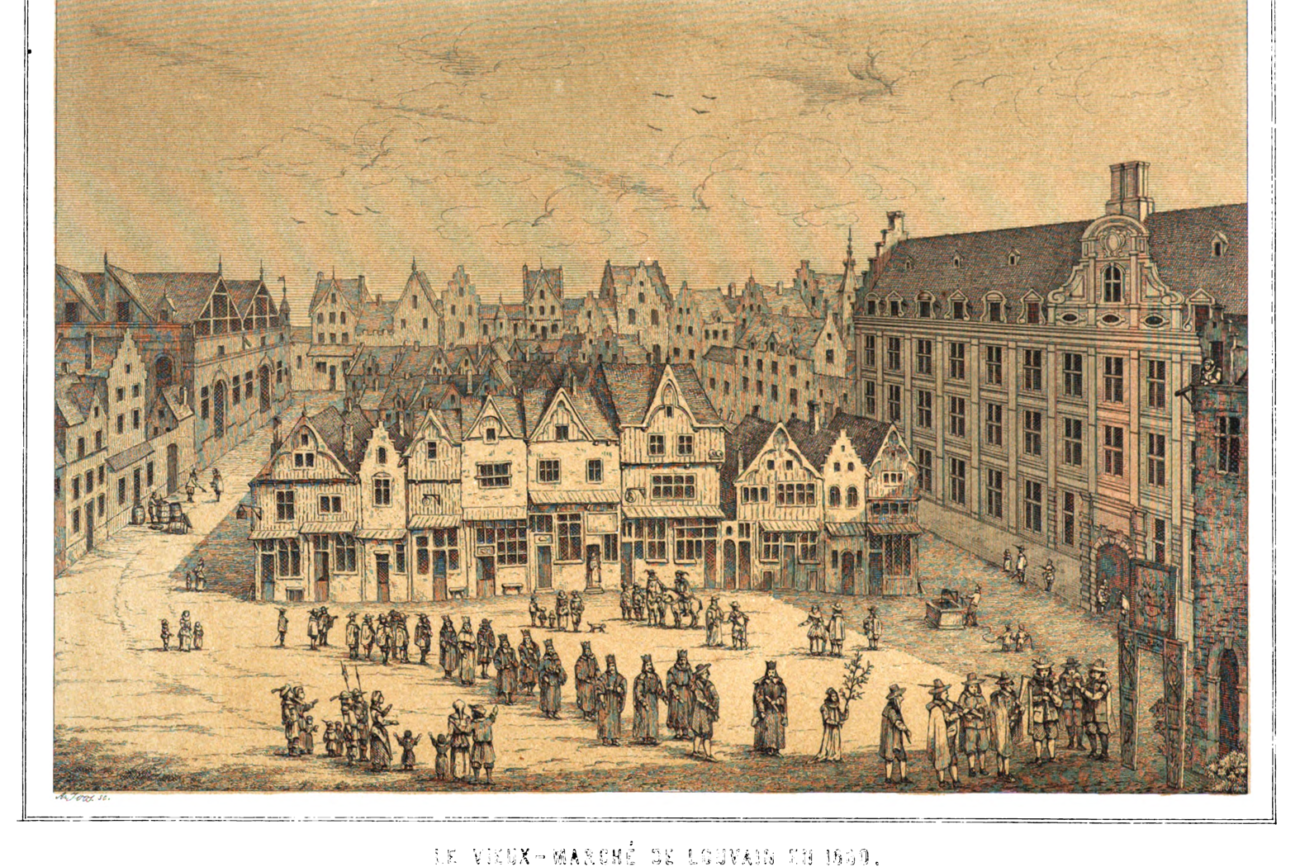 The Side Streets of the Oude Markt

What I find really interesting are the side streets of the Oude Markt. Many of their names tell you something about the history of Leuven.

Kortestraat (Short Street): This street links the Oude Markt to the Grote Markt. It was first mentioned in 1267, and was mentioned in 1719 as the “Boterstraat” (Butter Street) due to the butter market here at that time.

Kroegberg (Bar Hill): Originally called ‘Kroegstraat‘, this street that leads to the Parijsstraat forms the northern side of the Oude Markt. ‘Kroeg‘ means ‘bar’ – certainly a sign of what the Oude Markt was to become today, it also means ‘inn’ in the Middle Ages. This street was known in the local tongue as “Schijtbergske” – little shit mountain. So, this was where people freely defecated!

Kiekenstraat (Chicken Street): Links the Oude Markt with the Naamsestraat. Most likely named after a chicken market here.

Zeelstraat (Cord Street): Named after a tow and cord market here and first recorded in 1487, this street was the location of Leuven’s disappeared Korenhuis (Grain House) and Waag (Weighing House).

Krakenstraat (Cracks Street): This is a very strange name for a street! Already recorded in 1301, the street name is a bastardisation of the name of an old Leuven trading family ‘van Craeckhoven‘, who was also known in a contract from 1262 as ‘de Cracou‘ (from Kraków). This is the family originally came from Kraków, Poland, and set up its trading office in the street. At that time, trade relations between Leuven and Kraków mainly focused on the supply of cloth in exchange for furs from Eastern Europe. It is funny how Leuven’s 19th century historian, Edward van Even, did not know about this, and attributed the name – in French, ‘Rue des Jardins aux Craquements‘ – to the cracking sounds the pebbles made when one walked through the garden of a house located in the street!

Lavorenberg: This street forms the southern side of the Oude Markt, where the Heilig Drievuldigheidscollege (Holy Trinity College) is located. “Lavoor” refers to second-grade marble, and it is a bastardisation of the French word “l’ivoire” (meaning “the ivory”). There was no ivory or marble market here. Instead, there was an inn called “De Lavoor” that used to occupy the corner with modern-day Parijsstraat.

Drie Engelenberg (Three Angels Hill): This street leads from the centre of Oude Markt to the Parijsstraat. According to a certain J. Schoonjans, there was once “three water sources”, dedicated to three nuns buried there: Bertilia, Eutripia and Genoveva. The water supposedly possessed healing powers for some lady illnesses. Leuven resident Guido Abts remarks that the symbol of three goddessess is current in Germanic (The Three Norns), Celtic (the Three Matres), Roman (the Parcae: Nona, Decima and Morta) and Greek (the Moirai: Clotho, Lachesis and Atropos) traditions. In southern Netherlands (thus modern-day Belgium) after Christianity, they often took the Christian form of three nuns with the names of “Bertilia, Eutripia and Genoveva” or “Catharina, Barbara and Margaretha“. According to another resident Sonia Busselen, a certain Mr Sprengers testified that during the works on the Oude Markt, a water well of 1.2m diameter and 3.5m depth made of limestone was discovered on 9 June 1983. The well was drained by the fire department and completely covered by the workers. Abts also noted that the Drie Engelenberg was called “Montagne Noire” (Black Mountain) during the French Occupation, referring perhaps to the ritual burnings that continued on the site in the 18th century. He remarks that in a small village called Zepperen outside Sint-Truiden, this ritual continued into modern times (although prohibited by the Church in the early 13th century). A mixture of yarn, needles and grain were burnt, together with a piece of clothing of the sick person. If the mixture floats in the holy water, then there is hope of recovery.

The Great Fire of Leuven

In the night of 25 August 1914, much of Leuven was engulfed by flames through bombardments by German troops. The whole of Oude Markt was burnt down, including the precious manuscripts stored in the University Library in the Lakenhalle extension on the Oude Markt. Another university building that was destroyed, was the Heilig Drievuldigheidscollege (1659) at the south side of the square.

The buildings were rebuilt after the war, only to be destroyed again in the British and American bombardments during the Second World War.

All the buildings you see here were newly rebuilt, except two, which are located on the southwest end of the square. Nummer 35 with an original Louis-XV facade, known as “de grote klok” and “Stad Turnhout” in the records, dates from 1694, it now houses the Café Belge. Number 29, that has an original sandstone facade, dates from the end of 18th century/early 19th century.

The Water Pumps of Oude Markt

Another sign the Oude Markt was the centre of Leuven is its two water pumps. The Oude Markt was also where citizens came to fetch drinking water. Surprisingly, both survived the two world wars. On the north side, the water pump is called the Sint-Janspomp (St John’s Pump). On the south side in front of the Heilig Drievuldigheidscollege, the pump is shaped like a tall pillar and dates from 1724.

The Longest Bar in the World

Leuven’s Oude Markt holds the title of “the longest bar in the world” (de langste toog ter wereld). Not sure exactly who gave it this title as the square is not that long, but it has since been a reputation Leuven has been boasting since the 1980s. With more than 40 bars and around 4,000 sitting places, Leuven’s Oude Markt has not just become a favourite student hangout, but also a tourist attraction in the summer. In summer, around August, Leuven holds its annual foodie festival called ‘Hapje Tapje‘ (snacks and taps). The Oude Markt is the venue of the event’s major highlight, the “Barmen’s Race“.