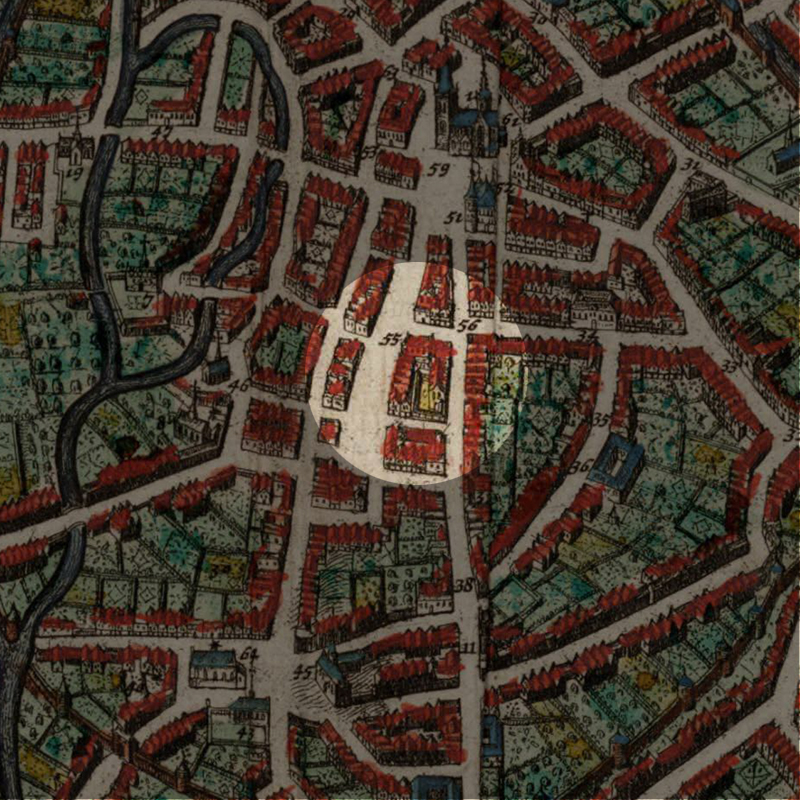 First recorded in 1193, Leuven’s first Lakenhal (Cloth Hall) stood close to the ‘Corenhus‘ (Corn House). In 1311, this Cloth Hall was taken over by Duke of Brabant Jan II, which pointed to the growth of cloth production and trade around the 1300s. The original Lakenhal was most likely located behind the current building, whose construction began in 1317.

There is very little record of the appearance of the 14th century Lakenhal, apart from an engraving by van Gramaye dating from 1610. It was a two-storey building, with sail-like roof structure. The same structure was used in Brussels’ Lakenhal of 1353, which has since disappeared. The engraving shows several entrances along the main facade by the Naamsestraat as well as along the Zeelstraat.

Archaeological and building historical data show that the ground floor and the first floor of the hall were divided into two naves by a row of arches parallel to Naamsestraat. On the ground floor, there was at least one transverse wall perpendicular to this arcade. This wall may have been part of a vaulted passage that connected to the old 12th century cloth hall or to the Office of the Weavers in the courtyard at the back. The ground floor was probably used initially as the vending hall, while the first floor served as storage space.

The boom of the cloth trade however did not last beyond the century after the new Lakenhal was built. By the end of 1300s, the hall was less and less used. In 1431, the newly-founded Faculty of Theology of the University of Leuven, took up the southern hall of the ground floor. The northern half was gradually occupied by guilds and corporations. In 1481, city architect Matthijs de Layens even furnished a room there for the Dean of the Merchants’ Guild.

By the mid-17th century, the Lakenhal was in a bad state, with the roof causing persistent problems. Because the city did not respond to the repeated requests for renovation of the building, the university instituted a series of proceedings before the Secret Council. On 28 May 1679, the city and the university reached an amicable settlement: The city promised to transfer the full ownership of the Lakenhal, including the adjoining Office of the Weavers, to the university, with all shops and offices banned from the hall. In return, the university would undertake to build a new building to house the Office of the Weavers at its own expense and to waive any further legal requirements for the city.

The 1680 renovation saw the removal of the old roof, replaced by a tall superstructure in sand-lime brick, centrally crowned by a roof storey with triangular pediment. Inside, the old staircase in the central corridor was removed and replaced by a Baroque staircase in the north hall. The faculty rooms were set up in the southern hall on the ground floor. On the new floor, four classrooms have been set up for the faculties of Medicine, Civil Law, Canon Law and Theology. The book collections were housed in the roof floor. To commemorate the transformation of the Lakenhal into Universiteitshal, a Baroque cartouche was placed above the main entrance on Naamsestraat:

Sapientia aedificavit sibi domum
‘Wisdom has built itself a house’

But because of war and other disputes, the new Universiteitshal could not be put into use until 1690.

The Rega Wing and the University Library

In the 17th century, the Universiteitshal’s library collection grew and grew, such that the library space could no longer house all its books and documents. Under the encouragement of physician, bibliophile and rector (1719-1722), Henri Joseph Rega, the planned expansion accelerated. With the transfer of the city’s warehouse to the university on 20 November 1720, the new extension building, called the ‘Regavleugel‘ (Rega Wing), consisted of a three-storey high wing between the Universiteitshal and the Oude Markt, was executed in classic Baroque style. The interior of the library with parquet, cupboards and paneling by master carpenter Henri Bonnet from Nivelles and sculptor Denis-Georges Bayar (1690-1774) from Namur was probably not finished until around 1733. The main entrance to the Rega Wing were the three arcades in the southern courtyard; there were secondary entrances from the central corridor of the Universiteitshal and through a gate in the facade on the Oude Markt.

But even with this expansion, the library had already become too small by the end of the 18th century. This led to the evolution of the whole Rega wing into the University Library, from the 19th century to 1914.

The German Terror of 1914 and the reconstruction of the Universiteitshal

In the night of 25-26 August 1914, the German military set fire to the Universiteitshal and the Rega Wing, destroying an estimated 230,000 books, 950 manuscripts and 800 cradle prints.

Only the facades remained.

After the First World War, the question arose about the possible reconstruction and future use of the buildings. Ultimately, it was decided to build a completely new library on a burnt-down block of houses at the current Monseigneur Ladeuzeplein. In 1921, the city of Leuven guaranteed that it would be responsible for the reconstruction of the Universiteitshal, which would then be given a long lease to the university for 99 years.

Nevertheless, the bombardments during the Second World War brought new damages to the Universiteitshal.

The last restorations took place in 1984, when loose stones were removed from the facades, which were then cleaned and restored in the following two years. Recent interventions include the introduction of a lift shaft in the stairwell and the realisation of a new modern building in the courtyard on Zeelstraat.

The stone foundation plaque of the former Lakenhal is the oldest known one in Dutch, according to wimvist.com. It reads:

In English: Master Jan Stevens and Master Arnout Hore and Master Goert Raes: These three masters began on this Hall in the year of our Lord 1317, on the Monday after Divine Mercy Sunday.

In Dutch, ‘Beloken Pasen‘ means ‘Closed Easter‘. This refers to the Feast of the Divine Mercy, which is celebrated on the Second Sunday (Octave Day) of Easter.

Today, the former Lakenhal is the KU Leuven’s policy centre. It is also its central enrollment office and one of its halls is regularly used for the public PhD defenses. The ground floor contains a small museum, the university shop and a coffee bar.

The lift in the new modernised Rega Wing brings you to the top of the building, where you have a magnificent view over Leuven above the Oude Markt.