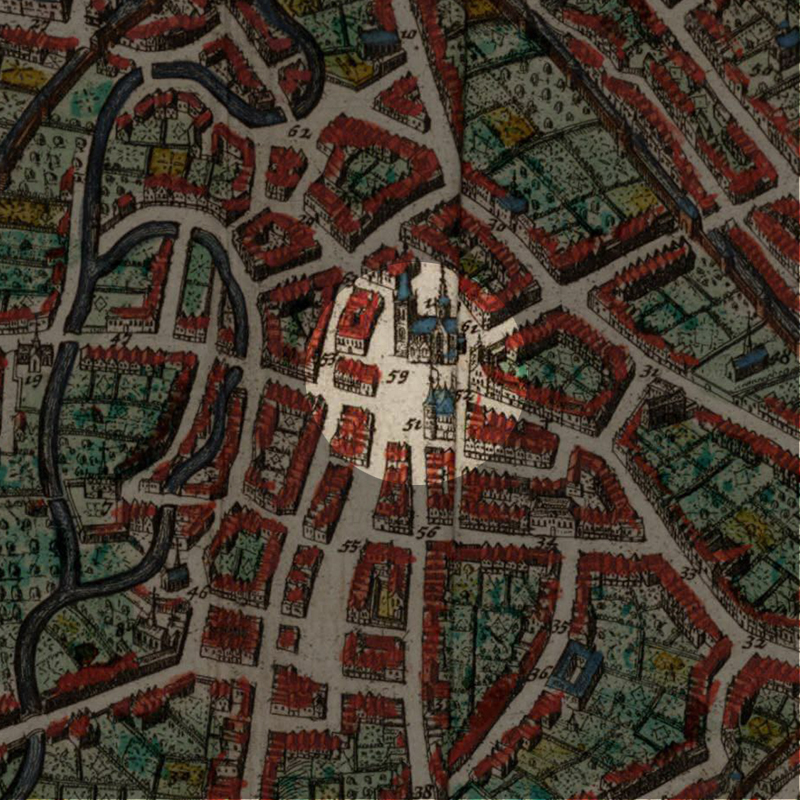 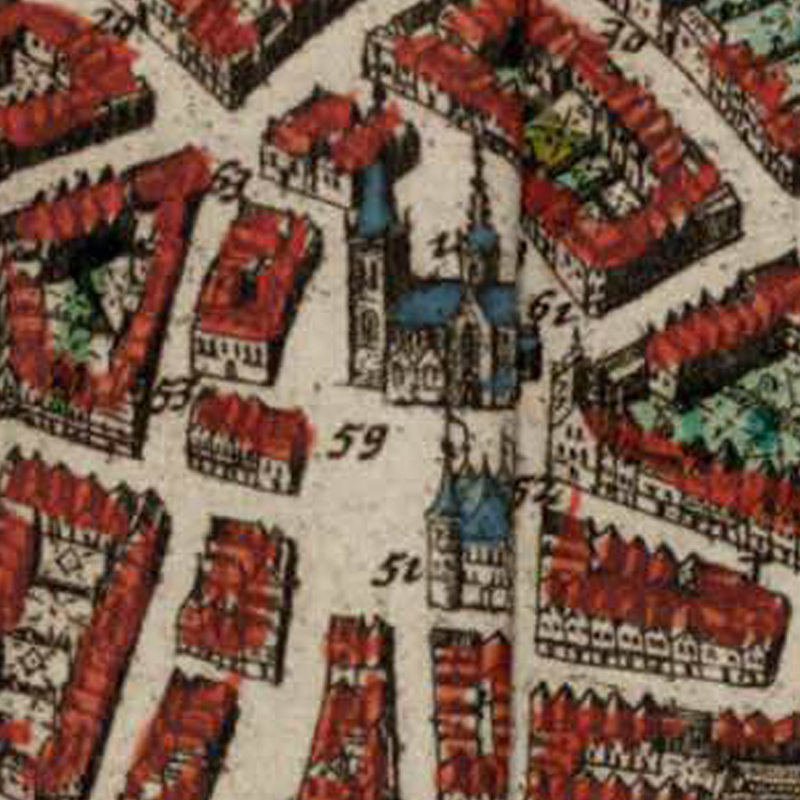 The original Grote Markt of Leuven was in fact the much larger square that is now called the ‘Oude Markt‘ (Old Market). The area that is today the Grote Market where the Sint-Pieterskerk, the Stadhuis (City Hall) and the Tafelrond are situated was largely the church cemetery of the church.

There was a rather inconvenient road that cut through the cemetery, then known simply as the ‘steenweg‘, that connected the Tiensestraat with the Naamsestraat and the Brusselsestraat. In short, the central connection point of these main trade routes was the cemetery itself.

This all changed when the city administration bought a part of the cemetery in 1427, in order to build a better infrastructure – a square – to connect the main roads. During this time, from 1410 to 1505, the Sint-Pieterskerk was being rebuilt from a Romanesque church to the Late Gothic church you see today.

This ‘modernisation’ of Leuven’s centre quickly followed: the new Stadhuis was built (1448-1469), followed by the Tafelrond (1480- 1487). The reason for this was clear: Leuven lost out to Brussels as the seat of the Duchy of Brabant in the second half of the 14th century. It desperately needed to rebuild itself as an important religious and political centre in order to win back the powers that decided.

The long wait for the name

The current shape and size of the Grote Markt was already established by the end of the 15th century. Yet Leuven citizens never took to calling it the new ‘Grote Markt’.

Even after the cemetery has disappeared, people still called it the “Sinte Peters kerkckhof” (the St Peters’ churchyard) or “den (Grooten) Kerckhof” (the [big] churchyard). And with the gothic buildings completed and accepted by the locals, they would only accept to call it “Plaetse” (Place or Square). Then from the 16th century onwards, locals called it the “Cleyne merckt” (the Small Market), in contrast to the “Grote Markt” which is the current ‘Oude Markt’.

This is because despite the political and religious centre shifting to the new square, the “main square” for the people was still where economic activities were taking place, in the old market.

The Great Fire of Leuven

In the night of 25 August 1914, much of Leuven was engulfed in fire through bombardments by German troops. Apart from the Stadhuis and the police station beside it, the whole of the Grote Markt, including the Sint-Pieterskerk and the Tafelrond, was badly destroyed.

Walking on the dead

Despite the complete overhaul, the total destruction in the two world wars, there are still skeletons under the Grote Markt. As recent as in the 1990s, skeletons have been found in the depths of 3 metres under the square. This shows how densely used the cemetery was, by the time Leuven grew rapidly in population in the 11th to 15th centuries.

Today, Leuven’s Grote Markt has been restored to its former 15th century look. Many of the houses that surround the square were largely reconstructed to their medieval appearance, even though they had not looked like this by the end of the 19th century.

It is one of the most beautiful spots of Leuven and certainly a tourist attraction on its own.