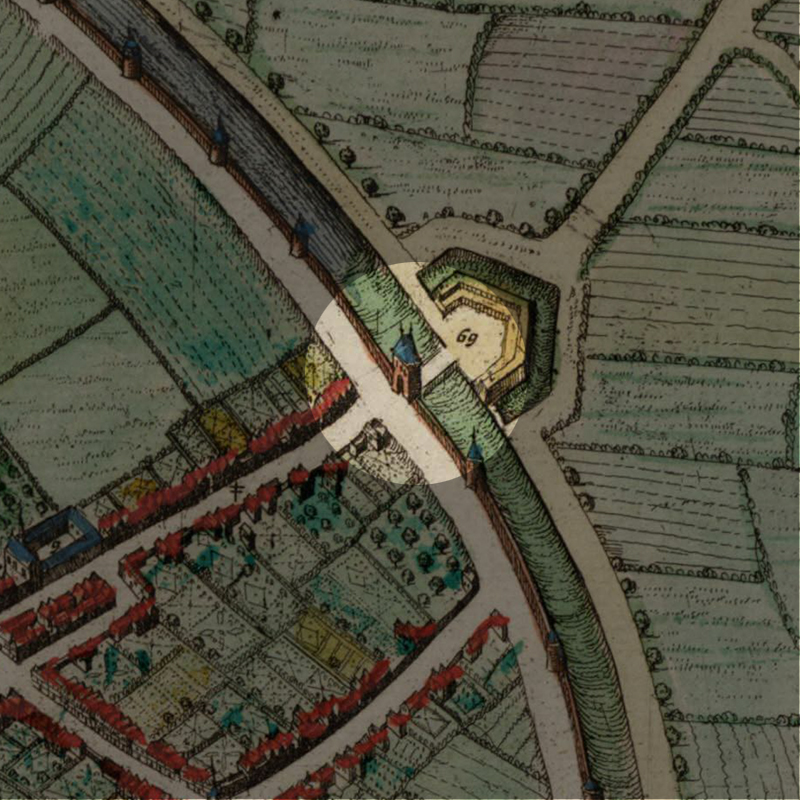 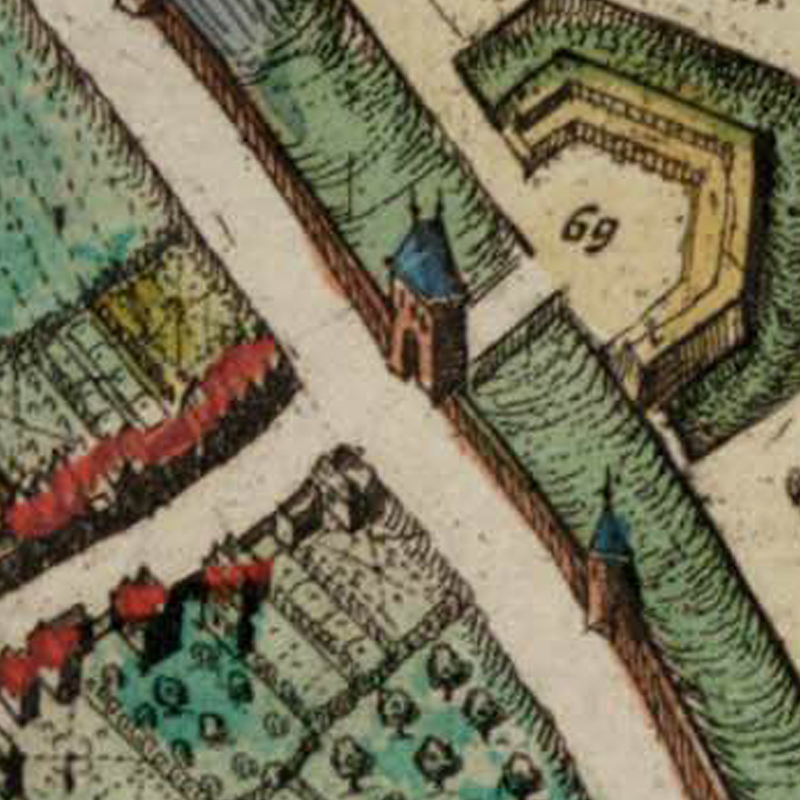 Before the street was named Diestsestraat (Diest Street), it was called the Dorpstraat, or Oppendorpstraat, after the village Oppendorp that was located just outside the first city gate located on the same street. When the outer city fortifications were built, the new city gate became known as Dorpstrate Buite-Poorte – The outer gate of the Village Street.

According to historian Edward van Even, the gate was also called the Vlierbeekse Poort, because it led to the Abdij van Vlierbeek (Abbey of Vlierbeek), and the Diestsepoort, because the direct road to Diest laid outside the gate. It was this name that remained with us today.

No one knows how the first Dietsepoort looked like, except that it was built in 1361 and had a draw bridge.

But due to a fire that broke out in the village of Blauweput that spread to the Diestsepoort on 29 April 1518, the original city gate was completely burnt down. It laid in ruins until 1529, when the city magistrate decreed its reconstruction.

One of the most majestic buildings of Leuven

The rebuilding of Diestsepoort laid on the shoulders of the old but respected architect Jos Metsys, who designed a huge edifice with two towers on top of a circular foundation. But when the old gate was removed, it was discovered that the ground was too muddy and could be unstable for such a gigantic building. That concern was so allayed when two renowned architects from Brussels and Mechelen arrived in Leuven and gave the green light to proceed.

The stones came from around Leuven, the foundation stones from behind the Abdij van Vlierbeek and the others from Diegem and Gobertange.

After the death of Metsys in 1530, a young man named Walraven took over. When the Dietsepoort was completed a year later, what a sight it was to behold! A sculpture of the Holy Trinity was placed above the giant oak gate on the city side. On the country side, two lions, two griffins and another set of the Holy Trinity adorned the facade.

Two plaques were placed on the monumental Diestsepoort. On the intramuros facade:

On the extramuros side, the plaque wrote:

By 1798, the bridge that led out of the Diestsepoort was in ruins, such as going in and out of the city became a precarious affair. In 1800, the fencing of the edifice was demolished.

But the Diestsepoort survived the fate of the city walls and the other city gates, broken down by the French invaders, because of its sheer monumentality. In 1818, it was given to the government to be converted into a central prison. Renovations started immediately for the conversion, such that by the end of the year, one had to look hard to find traces of the original design of Metsys.

With a much larger prison on the Maria-Theresiastraat, the Diestsepoort had finally finished serving its due. On 5 February 1873, the Diestsepoort – one of Leuven’s monumental city gates – was completely demolished.

Today, when you reach the end of the Diestsestraat, you arrive at a roundabout, under which a tunnel runs through. Behind the roundabout, is the bus station, itself attached to the train station. Take in this whole scene, because when you look at the surviving sketches of Diestsepoort of the 16th century, you can still recognise the certain elements: the circular gallery is now the roundabout, the mote is now the tunnel, the bus station and the Acerta building were the ramparts and imposing city walls.

The Diestsepoort is now one of the busiest spots of Leuven.