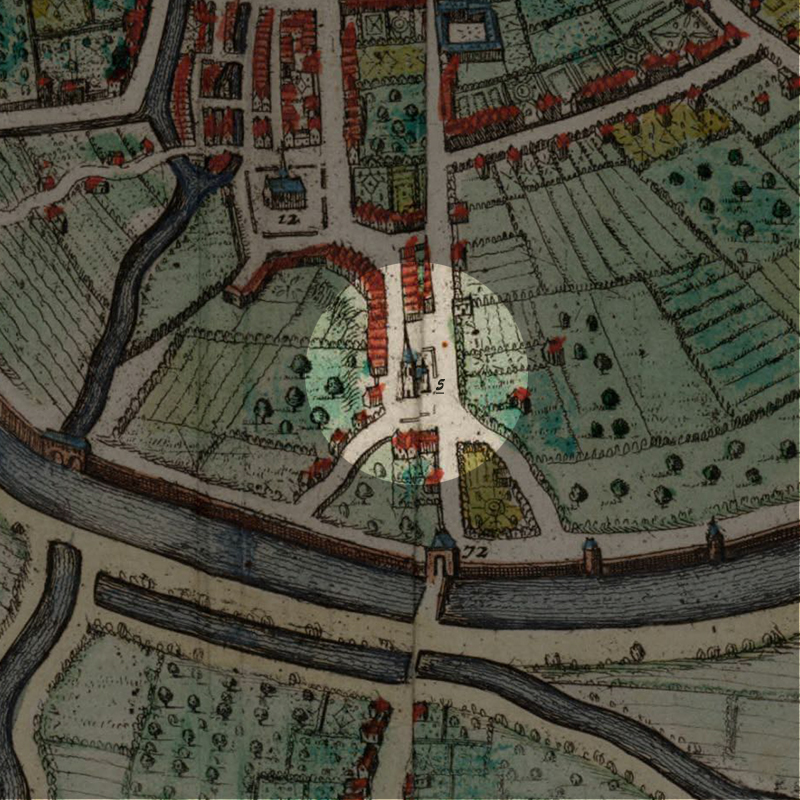 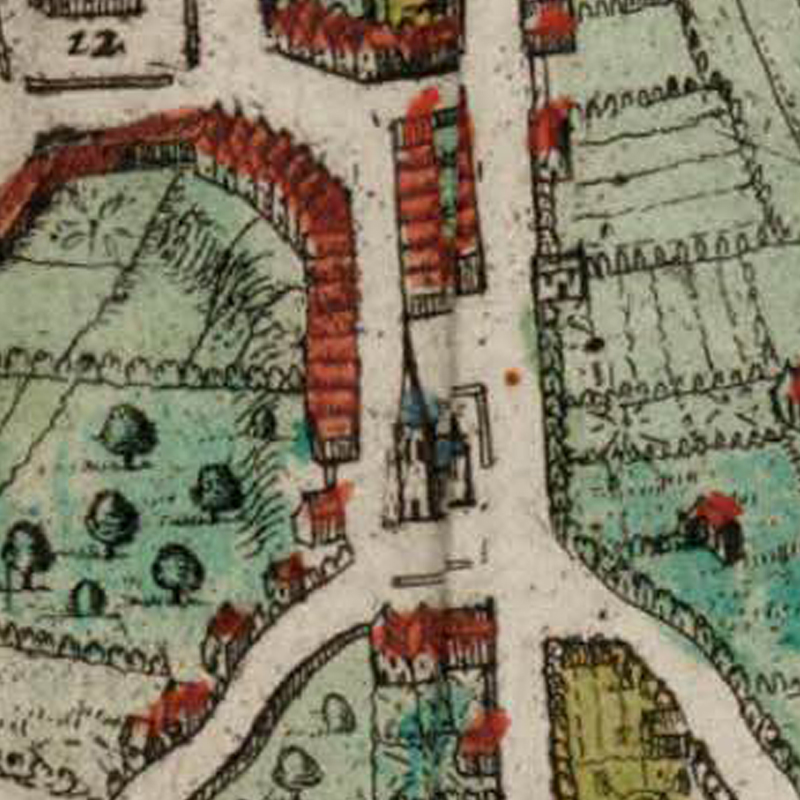 The Sint-Kwintenskerk started out as a small hilltop chapel in the neighbourhood of Ten Hove, most likely the local place of worship (first recorded in 1015 then in 1180 it was rebuilt in Maas-Romanesque style dedicated to Saint Quentin), when Ten Hove was still a village outside the first city walls. Today, under the foundation of the church tower, there could be some remains of that 11th-century chapel building. The actual oldest parts of Sint-Kwintenskerk are the lowest parts of the western tower, built in the 13th century. The medieval choir itself dates from between 1430-1450.

The ‘hill’ on which the church is located, was called the “Waayberg“, meaning “wailing hill” (presumably from the wind).

The Most Beautiful Church of Leuven

In his writing “Lovanium”, Justus Lipsius, Leuven’s most famous philologist, philosopher and humanist called Sint-Kwintens the most beautiful of all churches in Leuven.

There are altogether five altars in the church. In the choir, you will find well-preserved fragments of rare 15th century frescoes about the life of Saint Quentin, patron of the church. Apart from that, there are also paintings by Jan Willems (The Last Supper, 1521), Gaspar De Crayer (17th C) en Pieter Jozef Verhaghen (18th C). The Van Peteghem organ from 1786 comes from the Pauscollege.

There are a total of 37 tombstones in Sint-Kwintenskerk. The oldest belongs to Leo van Lacousture (1561) and his spouse (1573). There are also various notable individuals buried here: Jan van Strijen (Bischop of Middelburg, 1594), Catharina van Dycke (1620, daughter of Johannes van Dycke and Johanna van der Gheynst) and half sister of Margaret of Parma who was the Governor of the Netherlands from 1559-1567 and 1578-1582. Margaret of Parma was the illegitimate daughter of Johanna van der Gheynst and Holy Roman Emperor Charles V when he was 22 years old. There is also the 16th-century tombs of Golinus van ’t Sestich and his wife Catharina van Vlaanderen.

There is a chapel called “Kapel van Jezus in ‘t Steentje” (Chapel of Jesus in the Stone) along the Naamsestraat, that was built in the garden of the former cemetary of the Sint-Kwintenskerk. The current chapel was built on the site of two older chapels in 1814 by architect Ange de Bruyn. The words “ME POSUIT R.D.J. DERARE, PSQL 1814” on the northern facade informs us that the then pastor of the Sint-Kwintenskerk Joseph De Rare had this chapel rebuilt after its destruction by French invaders in 1798.

Inside the chapel, you will find on the main altar a stone sculpture of a crucified Jesus with the cross represented as a living tree. The bas-relief sculpture most likely date from the late medieval period. According to local legends, this sculpture grows larger every year.

But the chapel is better known under another name among the Leuven population: “Kapel van Janneke de grijzer” (Chapel of John the Weeper). The name probably refers to an object either in an earlier building on the same site or to an image or sculpture here that has now disappeared of John the Apostle weeping under the cross.

The local word “grijzen” (to ‘gray’) means ‘to cry’. Parents with wailing toddlers used to bring them here to invoke John with the following rhyme so that their children would cry no more:

The irony is the hill on which the Sint-Kwintenskerk and the Chapel are located is called the Waaiberg (Wailing Hill).

Right opposite the Kapel van Jezus in ’t Steentje on the other side of the street, are remnants of two adjoint ‘Heilig-Geesthuizen‘ (Houses of the Holy Spirit) that belonged to the Sint-Kwintenskerk.

The Latin on the facade of refers to the construction by Jan van ‘t Sestich in 1567. The Hebrew letters YHSWH meant ‘Jesus the Saviour’, which was used to ward off the devil.

Most of the Baroque furniture you see here were filled after 1796, with pieces from the demolished ‘Klooster van de Ongeschoeide Karmelieten‘ in the Naamsestraat.

The Sint-Kwintenskerk was completely renovated between 1895 and 1914 by architect Pierre Langerock (1859-1923), and in 1928, the furniture and paintings were also restored. Further works were carried out in 1960. The glass windows were filled in 1970 designed by Michel Martens, those that were not designed were simply installed with plain glass.

On the one hand, the church has not undergone any major physical changes since its construction, so you can truly see what Justus Lipsius meant about its beauty. It is indeed a building of extreme elegance, perched on a hill. On the other hand, modern tall houses that now surround it take away some of the awe it was supposed to inspire, especially when coming in to Leuven through the outer city gate of Naamsepoort.