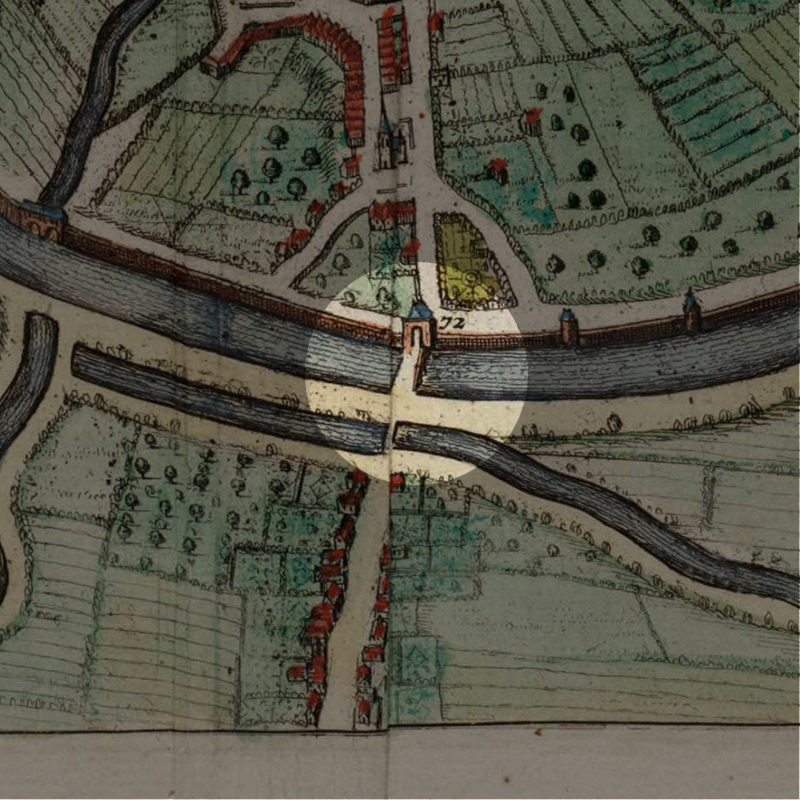 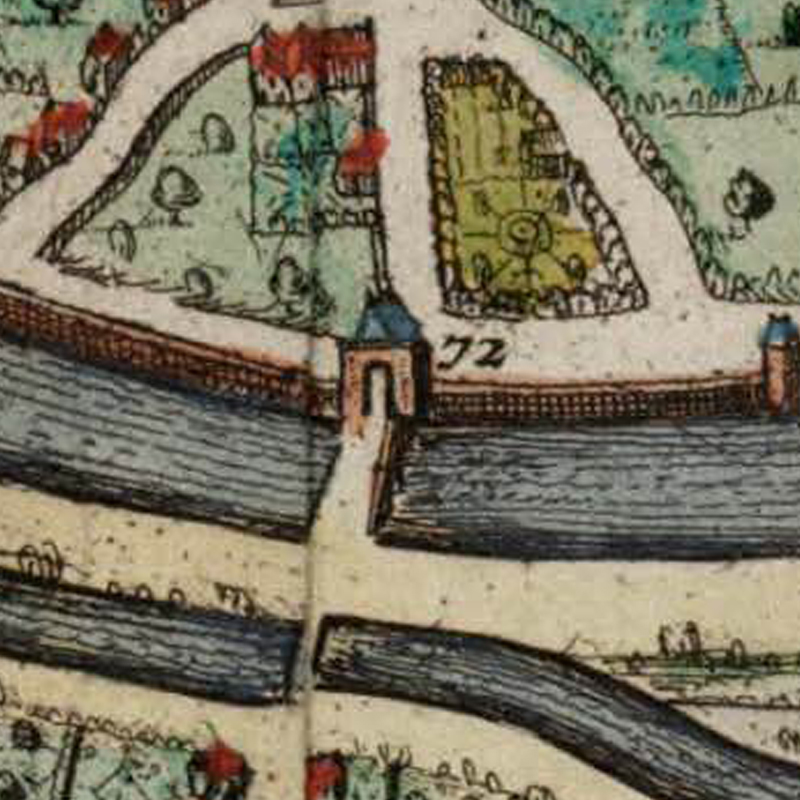 From the Poorte te Hove ter Beke to the Heversche-Poorte

First built in 1358, the Naamsepoort was known as the ‘Poorte te Hove ter Beke‘ which translates into ‘Beckcourt Gate‘. 19th-century Leuven historian Edward van Even said many mistook the court to refer to the Arenberg Castle located in Heverlee. Actually it meant the neighbourhood of ‘Ten Hove‘ where the Groot Begijnhof is located. You can read in the entry about Groot Begijnhof that a stream (or a ‘beck’) separates Ten Hove from Aborg, hence it makes sense that the Naamsepoort’s first name referred to this area.

Nothing was known about this first building, except that it was supervised by Hendrik Sammen and covered with tiles provided by Willem den Ynghelschen over 25 weeks.

Emboldened by his victory at Den Briel in 1572, William of Orange started marching south. Leuven’s city and university drew up a new tax on beer, wine and real estate called “gemeyne middelen” to build up the city’s defense.

But on 3 September 1572, the Prince of Orange and his forces arrived at the Naamsepoort. More than 8,000 calvary troops and 42 companies of foot soldiers piled the Naamsepoort with straw, tar and gunpowder. Within a flash, the city gate started to crumble.

With the Naamsepoort destroyed, the Dutch forces marched into the city.

By now, the people of Leuven realised that it was impossible to defend the city, and they paid the ransom of 16,000 florins to avoid being plundered.

But since the war arrived at the doorstep of Leuven, many students fled the city, so had the friars and nuns. After 1578, there was almost no students left in Leuven and the monasteries were completely emptied.

Colleges like the College van Mechelen or the Priorij van Sint-Maartensdal (the ‘Lindisfarne of Leuven’) never recovered from the destruction.

Despite a decree was issued in 1573 by the city magistrate to repair the Naamsepoort, it was not done until 1576, after a complaint was filed by Duke Charles de Croÿ, Lord of Heverlee.

The Joyous Entry of Don Juan of Austria in 1577

On 12 February 1577, the Catholic Habsburg Empire signed a treaty called the ‘Eternal Edict‘ in Marche-en-Famenne with the rebellious Protestant States-General in the Low Countries led by William of Orange.

Don Juan of Austria was installed as the Governor-General of the Low Countries on 24 July 1577, to on the one hand ensure peace with the rebels and to construct a solid military attack basis from the remaining loyal Catholic countries on the other hand.

As the first capital of Brabant, Leuven hosted Don Juan’s ‘peace’ mission from 3 March to 1 May 1577, after the signing of the treaty. Another reason why Leuven was first to host the Don Juan, despite Brussels being de-facto the new capital of Brabant, was the latter had more Protestant sympathisers and Leuven with its university was a Catholic stronghold. But he did travel to Brussels directly after Leuven.

In a highly staged procession with pomp and ceremony, the Don Juan as representative of the over-ruling Emperor entered into the city through the newly-rebuilt Naamsepoort. This was a ceremony known as the ‘Blijde Inkomst‘, Joyous Entry, which is extremely meaningful in the Low Countries. The first Joyous Entry of 1356 by Duchess Joanna and her husband Duke Wenceslaus (half-brother of Charles IV the Holy Roman Emperor) also took place in Leuven. The document signed on 3 January 1356 is seen as the equivalent of Magna Carta for the Low Countries. Thus the Joyous Entry of Don Juan in 1577 was meant to represent a new agreement between the Holy Roman Emperor and his citizens.

After entering the Naamsepoort, Don Juan was escorted along the Naamsestraat (then called the ‘Proefstraete‘) with stops along the Sint-Kwintenskerk, the Sint-Antoniuskapel, the ‘s Meiersstraat before arriving at his temporary place of sojourn the Pauscollege.

But history has shown, the Joyous Entry of the Don Juan did not result in the joyous recovery of Leuven. And the Eternal Edict certainly did not bring peace, but very much the opposite. The violence in the Low Countries continued until 1647 as the Habsburg rulers persisted in their crushing of the Protestants, through immense cruelty and relentless bloodshed. Not forgetting the joint Dutch-French Siege of Leuven (Beleg van Leuven) from 24 June to 4 July 1635, which saw Leuven civilians up in arms against the invaders. While Leuven was spared as a major battleground, its citizens, students, lecturers and monasteries suffered as much from the Spanish Fury.

The new Naamsepoort was more a tall than a wide building. It had nothing remarkable in appearance. But it was notable that it was defended by a large water-filled moat that ran west all the way into the Dijle river and then to the Voer river. To get in and out of the Naamsepoort, one would have to cross a wooden draw bridge, which was replaced by a permanent stone one in the 18th century.

Bear in mind the Naamsepoort had a towering background of the Sint-Kwintenskerk, perching on a hilltop inside the city walls. The Naamsepoort together with the church must have looked like two twin towers. You would not miss this in any old painting or drawing of the Naamsepoort.

After the Naamsepoort was broken down, much had changed on the spot. A 19th century tramline that ran through the Naamsestraat turned west upon reaching the junction here. In the late 20th century, huge housing blocks were erected west of the Naamsesteenweg, these still stand there today.

If you take a close look at the 1649 map, you’ll see a body of water right across the Naamsepoort. It is a stream called Molenbeek (‘Millbeck’ in English), that still exists today, albeit covered over.

The Molenbeek originates in the forests of Lovenjoel, it travels through Korbeek-Lo, before it reaches the Abdij van Park. There, the Molenbeek flows north of the ponds of the abbey but not touching it. Because it was so close to the abbey’s ponds, many mistakenly think the Molenbeek originates from the ponds. The Molenbeek then travels further northwards until the Naamsepoort, where it follows a course close to the former moat before arriving at the Dijle river. Here, the Dijle flows into Leuven through a massive lock called the Grote Spui, that still exists today.

According to Leuven Weleer (see photo), there was a severe flood at the Naamsepoort on 5 March 1947 that put most of the town of Heverlee under water.

Today, the Molenbeek runs underground before it reaches the Naamsepoort under a four-storey building which houses a print shop. It continues under the main road of Naamsesteenweg, the petrol station, and the giant housing blocks, and then reemerges after the block at No 23 Tervuursevest. Here it flows beside the football stadium ‘Den Dreef’ of Oud-Heverlee before entering the Dijle.

Today, the Naamsepoort is nothing but a busy traffic junction. The Sint-Kwintenskerk behind it is still there, albeit hidden by the modern houses crowding around it.

The next time you pass by Naamsepoort, spend a moment to think about the Don Juan of Austria, and try looking for the now-covered-up Molenbeek.