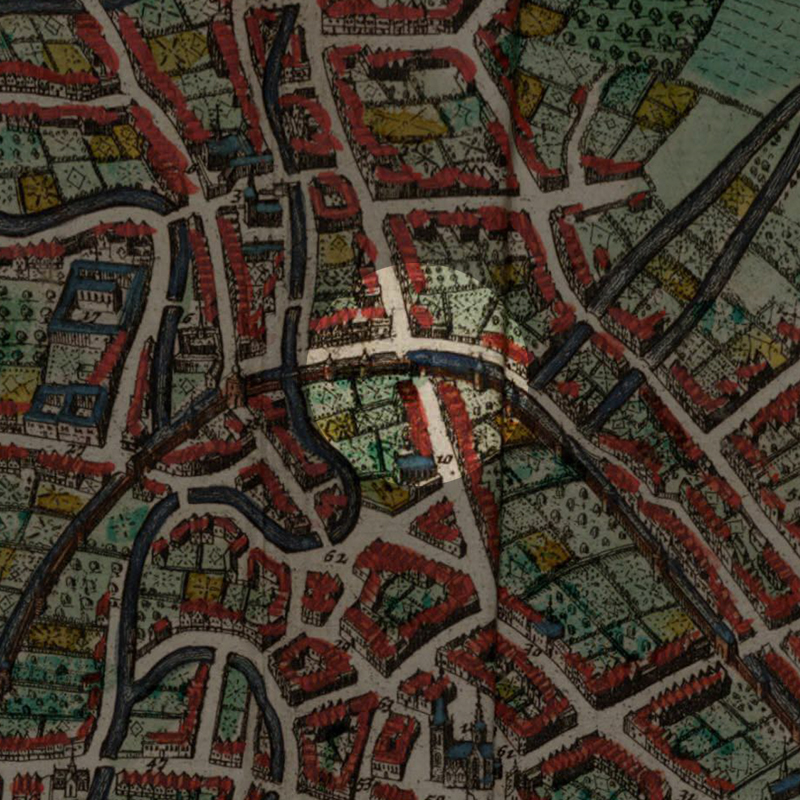 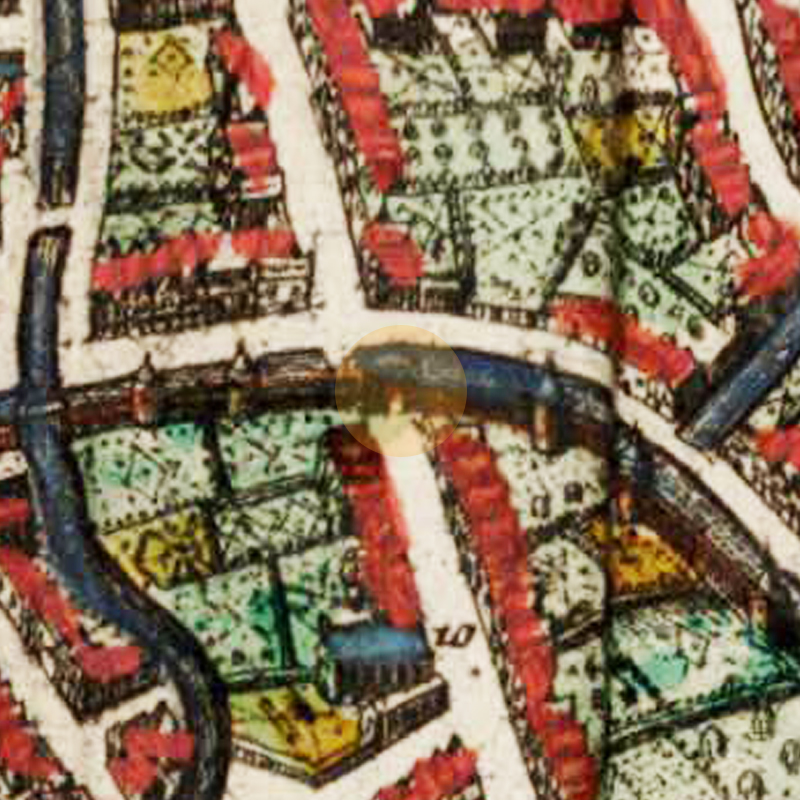 The Steenpoort was the northernmost gate of the first and inner defence Wall of Leuven. To its west, was the Sint-Geertruisluis (Saint Gertrude’s sluice Gate) and to its east, the Heilige-Geestpoort (Holy Spirit Gate). The roads today – Karel van Lotharingenstraat and the Vital Decosterstraat – were actually its water-filled moat, connected to the River Dijle via the sluice and the harbour at the Vismarkt (Fish Market).

According to Leuven’s 19th century city archivist Edward van Even, Steenpoort – which means “Castle gate” – was not named after a patrician family ‘van de Steen’. The word “Steen” was used in the medieval sense of a “prison”, not “castle”. Hence the translation should have been “Prison Gate”.

The appearance of the gate also pointed to this usage. Very similar to the university prison at the Borchtpoort, the Steenpoort had two massive semi-circular towers that rose above the gate and connected by a gallery above the passageway.

The Steenpoort was also called the “Coestrate-Porte”, refering to the older name of Vaartstraat, which means “Cow Street”.

Another name of the gate was the “Utlake-Binne-Porte“. Van Even said that this referred to the “outer lake”, which was the predecessor of the Vaartkom harbour today which was built in the 19th century when the canal was dug to lead all the way to Mechelen. This “utlake” was in fact a natural water basin where the rivers Dijle and Voer met and mingle before the larger Dijle flowed out of the outer city walls via the Spuigat (Spew Hole) by the Aarschotsepoort. 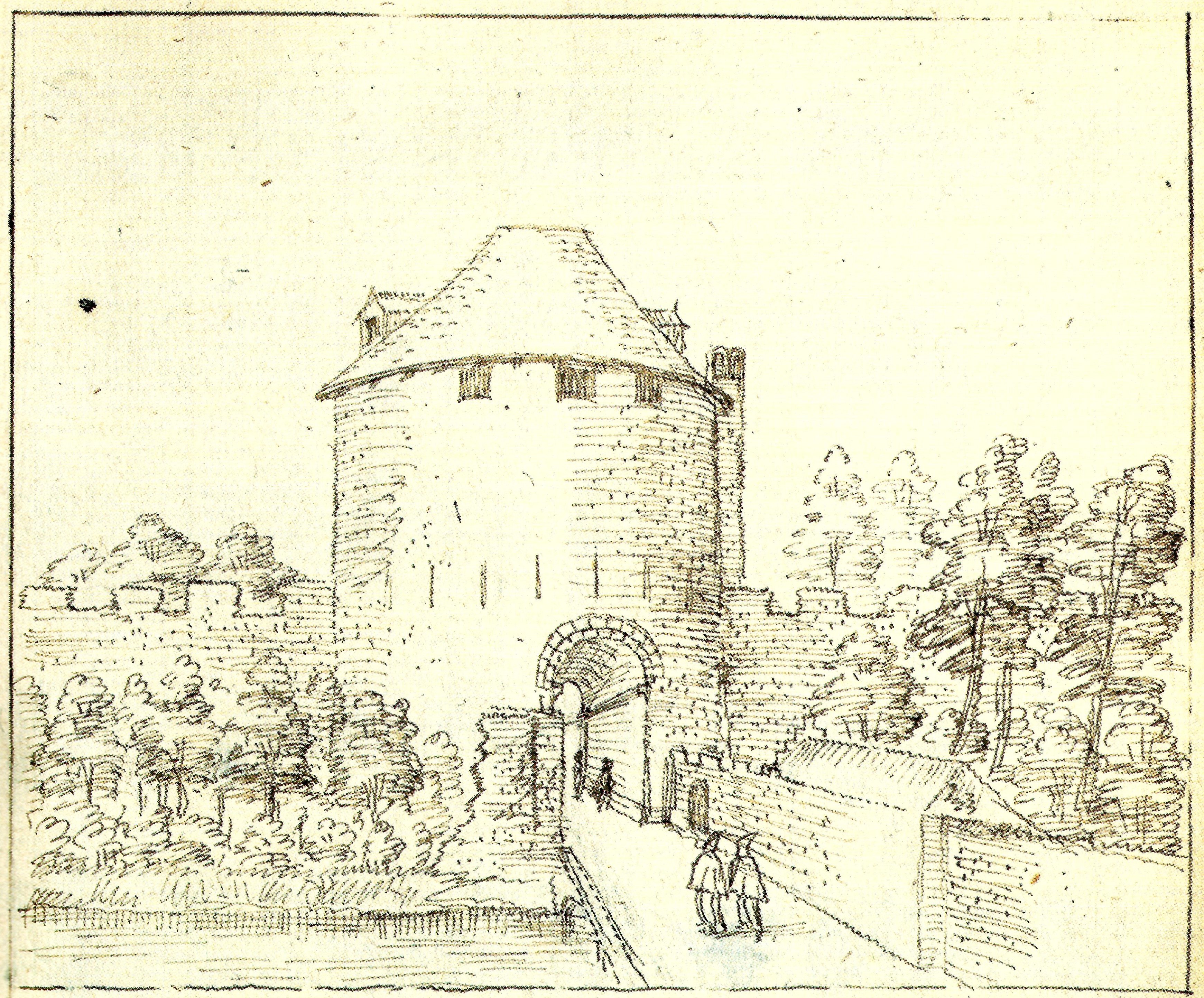 It is unclear when the Steenpoort started serving as a prison. But according to a record in 1371, prisoners held there were being kept warm with peat in the winter:

Certainly in the 17th century, the gate served as a criminal prison and a detention centre for strangers. It even had a torture chamber!

The state of the inner city gates and walls was dire by the 18th century. On 20 January 1778, the Steenpoort was sold to a Pieter Meulemans for 950 florins on the condition that it be torn down by the 1st of May. And he did. 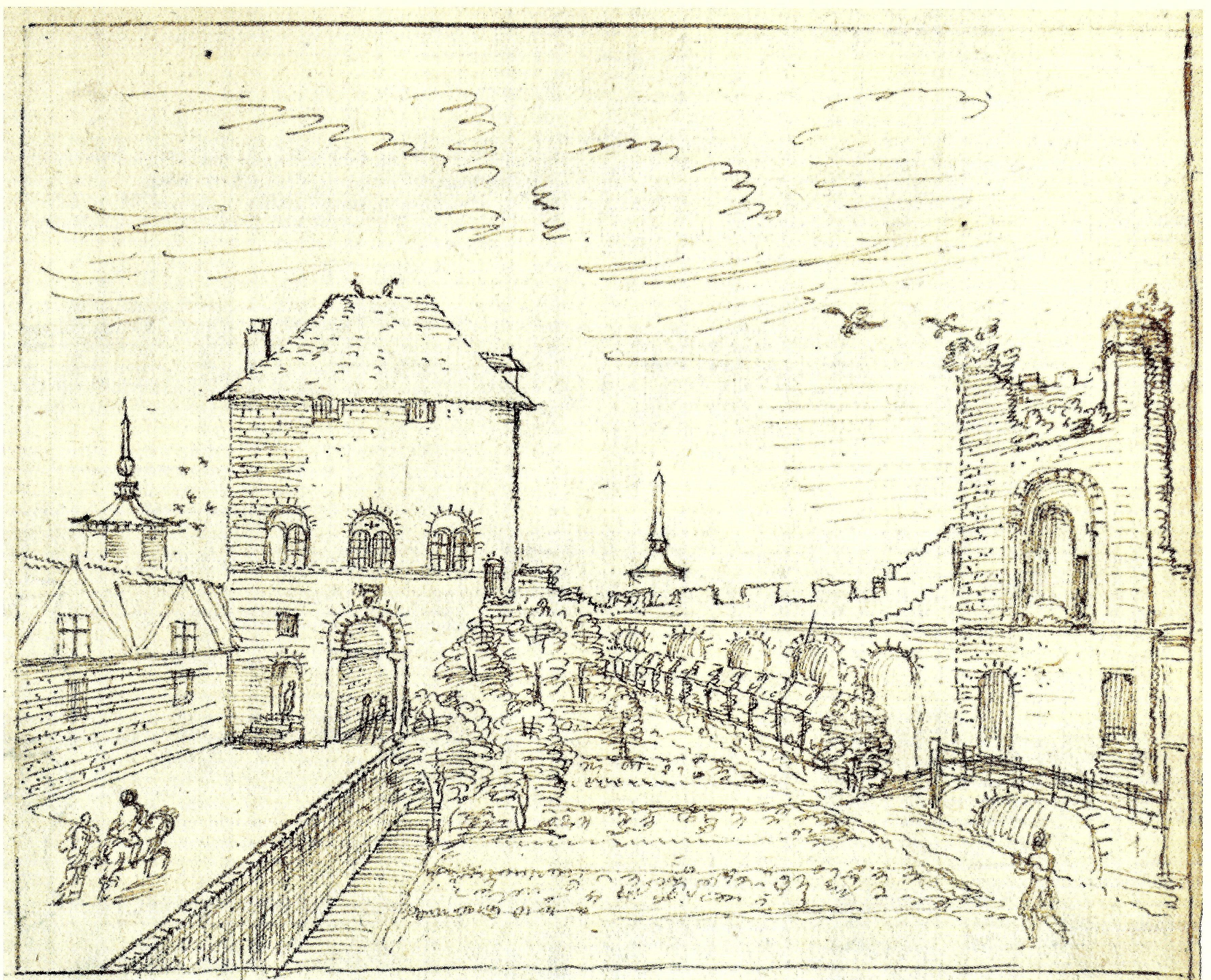 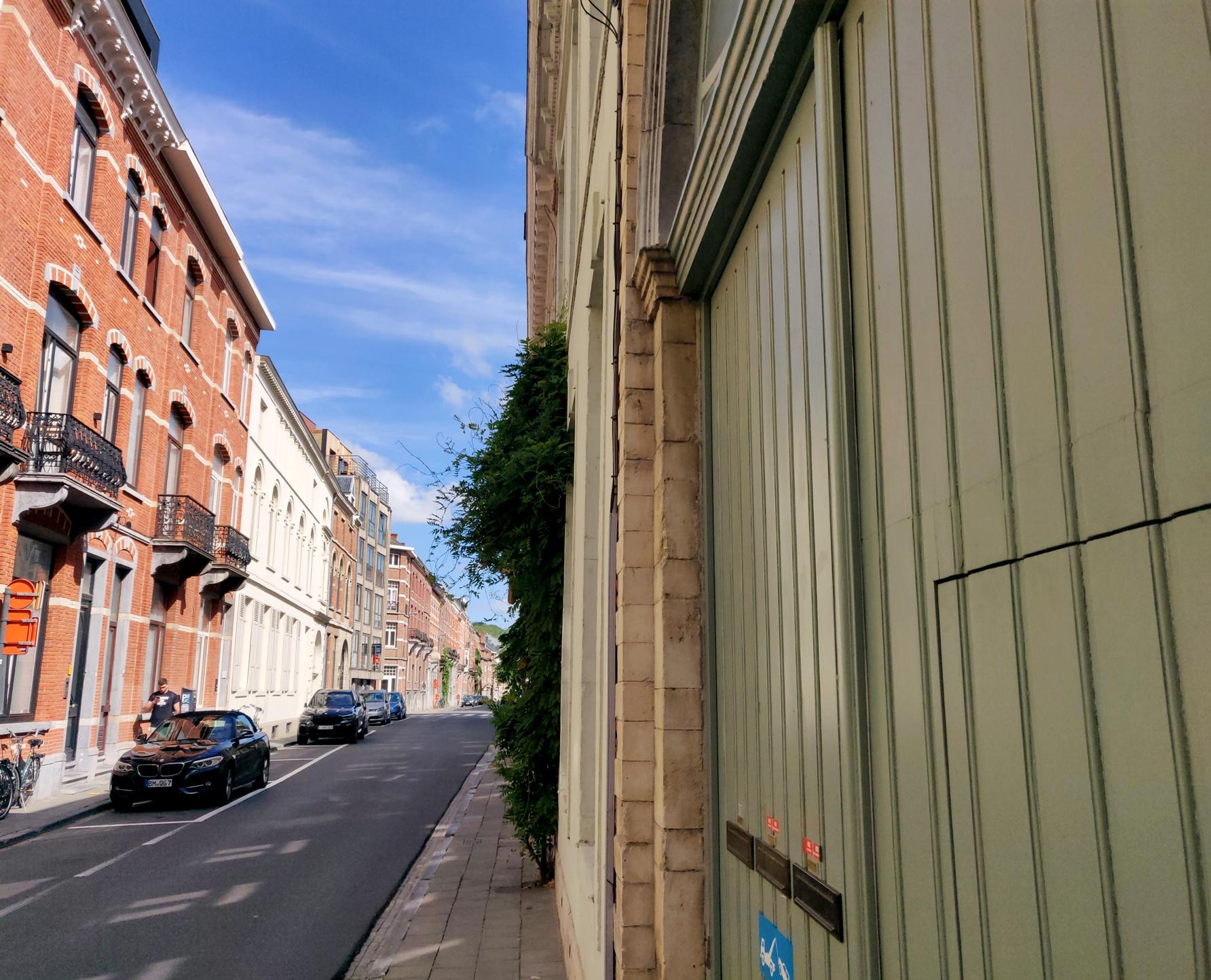 The gigantic prison that was the Steenpoort is no more. Also was the impressive city wall that ran from the former Steenpoort along the Vital Decosterstraat. You can still imagine this from looking at the drawings that survived. The curve of the street, on which you can find a carpark today, follows the moat. 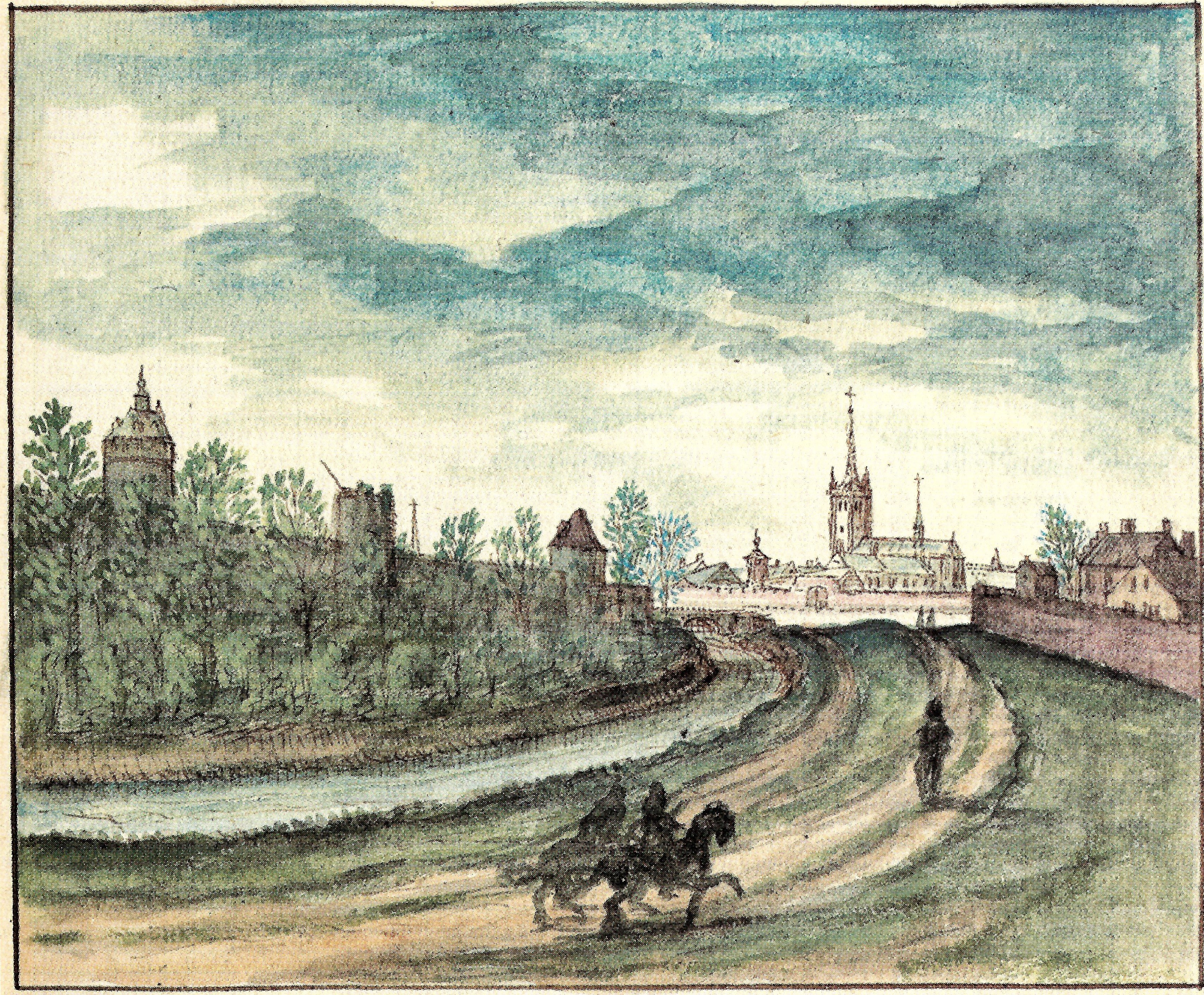 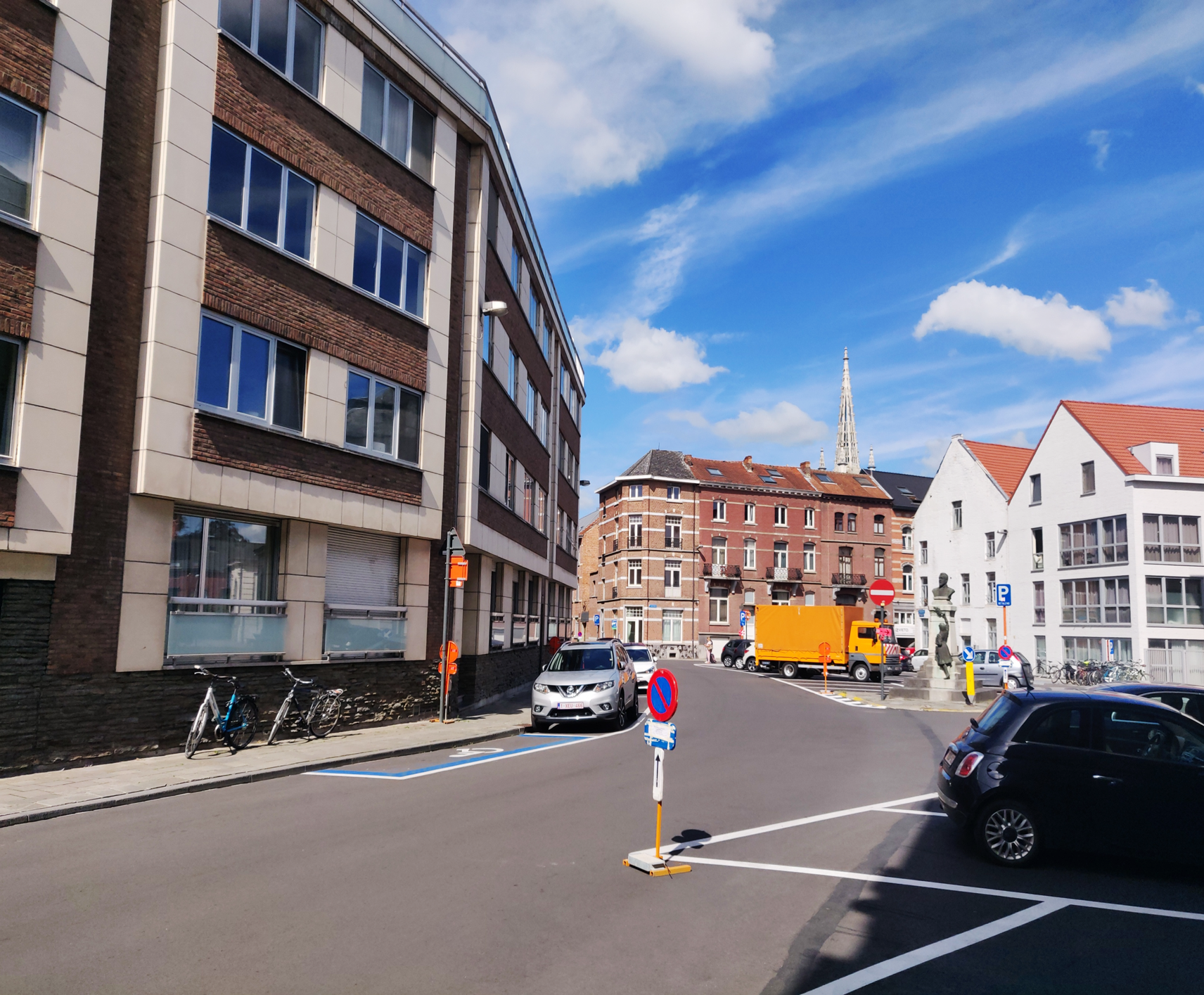 Steenpoort. View from east side. The spire of the church tower of Sint-Geertruiabdij (St Gertrude's Abbey) is still visible today.
VIEW ALL LOCATIONS OF OUD LEUVEN