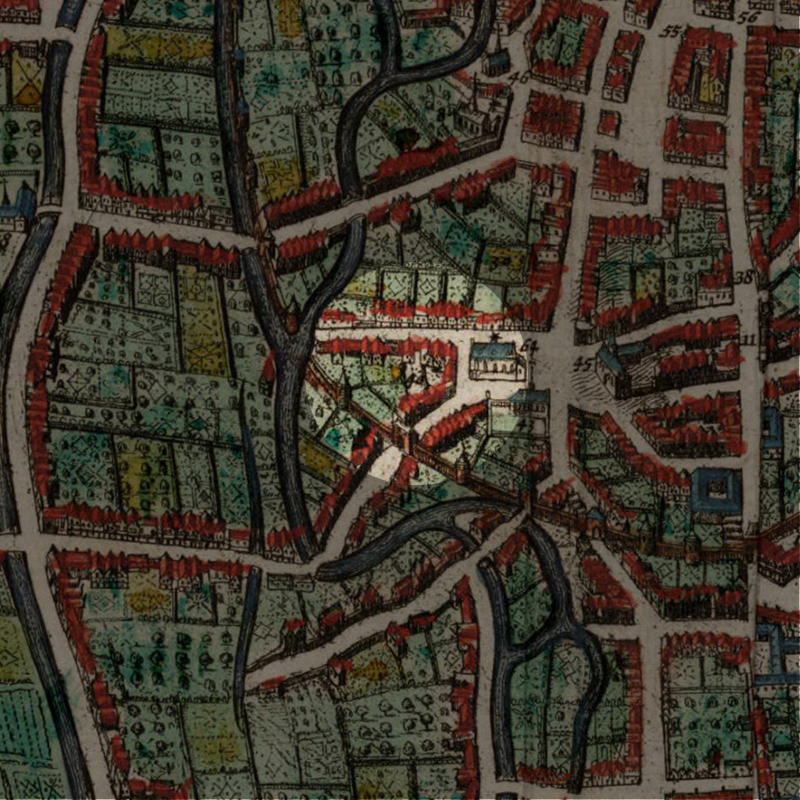 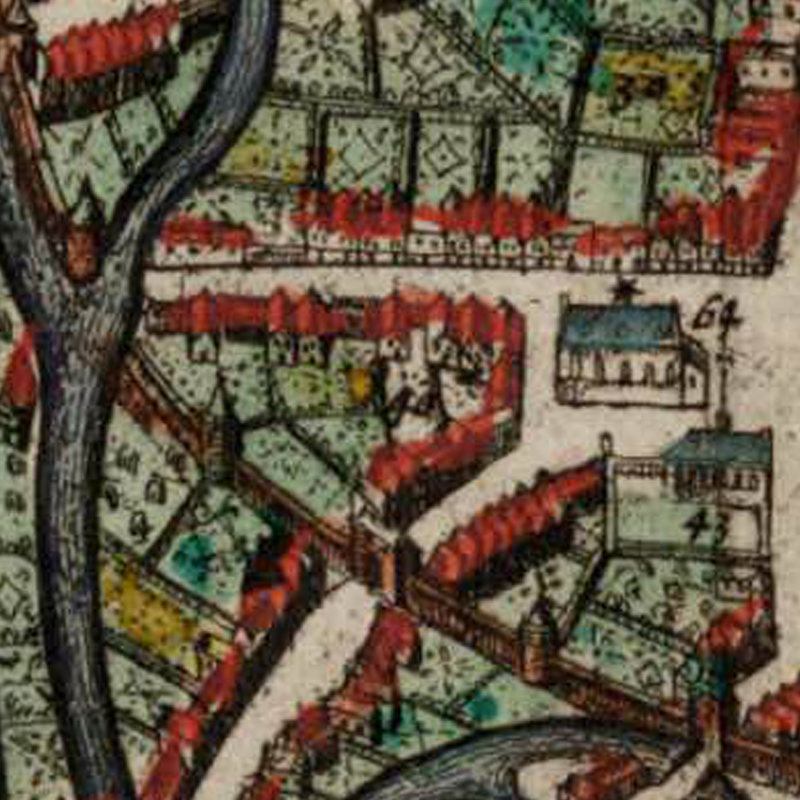 Founded in 1617, the Hollands College aimed to receive students in theology from the Bishopric of Haarlem.

But first, let us chat about the site. Back in the early middle ages, Leuven had seven leading noble families, all powerful and influential. One of them, Uten-Lieminghe, owned a city mansion within the city walls on this site, all the way to the remains of the first city walls by the river.

Built in 1511, the Hof van Uten-Lieminghe was covered in the white sandstone of Gobertange and had richly decorated windows. The square was called the Veemarkt (cattle market) or the Varkensmarkt (pig market). Above the entrance of the Hof van Uten-Lieminghe, was a statue of Pulchra Maria, or Beautiful Holy Virgin Mary (Mooie Onze-Lieve-Vrouw). The Pulchra Maria became the name by which the building and the site was known to Leuven inhabitants, and the sluice by the River Dijle on the edge of the property linking the two water towers of the first city walls was called the Mooie Onze-Lieve-Vrouw sluice. This water gate was named after the patrician family: Liemingepoort. During this time, boats had to pay tolls here to enter the city.

The first Hollands College was in fact not founded in Leuven, but in Cologne. Sasbout Vosmeer, the Apostolic Vicar of the Hollandse Zending (Holland Catholic Mission) and the Archbishop of Utrecht, the founder, specifically did not want to set up a college in the Spanish Netherlands (in which Leuven was situated). First of all, this would certainly have incited reprisal from his home country, the Republic of the United Netherlands. Secondly, Archbishop Vosmeer had never been on good terms with rulers of the Spanish Hapsburg empire, Albrecht and Isabella, simply because he had been appointed without their foreknowledge. This first Hollands College in Cologne was built on a site called Hoher Hügel, “High Hills”, so it is also known as Collegium Alticollense (High Hills College).

After the death of Vosmeer in 1614, an argument broke out between the clerics from Utrecht and from Haarlem. The Utrecht priests wanted to remain in Cologne while the Haarlem ones wanted to move to Leuven. Philippus Rovenius (Filips van Rouveen), the successor to Vosmeer, supported the Haarlem priests. As he was on a good relationship with the Archduke and duchess, unlike his predecessor, the move to Leuven went ahead without any issue.

Rovenius bought the Hof van Uten-Lieminghe and the Hollands College opened its doors in 1617.

Ironically, the Utrechters who remained in Cologne also moved to Leuven in the end. Instead of moving in with their Haarlem compatriots, they founded a new college in 1686, named after their Cologne college, the Hoge Heuvelcollege (High Hills College) located on today’s Naamsestraat.

Despite having being transformed into a college, the name of Beautiful Holy Virgin Mary remained with the site. The Hollands College was also known as the “College van de Mooie Onze-Lieve-Vrouw“, and also by its Latin name the “Pulcheria College“.

Soon after its establishment, Hollands College received one of the most famous religious figures Cornelius Jansenius (Cornelius Jansen) – founder of Jansenism – as its director. In 1618, Jansenius extended the 12th-century water tower of the Liemingepoort at the end of the college’s garden and turned it into his personal study and bedroom. Today, much of Jansenius’ modifications still remain. The water tower has also been renamed as the Janseniustoren (Jansenius Tower).

More exclusive photos and explanation about the Janseniustoren can be found in another of my articles.

Saved from the ravages of the French Occupation

By the 18th century, the medieval city mansion of Hof van Uten-Lieminghe had become dilapidated and in part in danger of falling down. With generous donations coming in from Haarlem, the college became one of the richest in Leuven. The complete rebuilding of the Hollands College took place from 1754 to 1757. Designed by well-known Leuven architect Jacques-Antoine Hustin, this is the current building that we still see today.

But in 1797, the French Revolution reached Leuven and the city was occupied by these foreign revolutionaries. The old University of Leuven was abolished, together with it, all the colleges, including the Hollands College.

The buildings were occupied by the public servants of the new French “Dijle Department” from 1797 to 1806.

After this time, the site was sold in a public auction in 1810 in two lots: the main college building, and the building by the garden up until the Janseniustoren.

By chance, the first lot landed in the hands of the Congregatie van de Dochters van Maria (Congregation of the Daughters of Mary) under the leadership of Cicercule Paridaens. In 1812, the sisters founded a girls’ school on the site, called the “Paridaensinstituut voor meisjesonderwijs” (Paridaens Institute). By 1819, they managed to buy the other lot and combined the site again into one.

The Paridaensinstituut operated on the site until 2008, by the nuns.

It was then sold to the Katholieke Universiteit Leuven (Catholic University of Leuven, KU Leuven) and is today the site of the Metaforum.

Hollands College: One of the best preserved 18th-century colleges from the old University of Leuven

With most of the buildings sold and therefore drastically transformed during the French invasion, the colleges of the University of Leuven were often shells of old exterior but completely modern interiors.

Due to the fact that the site was sold to a girls’ school and thereby retained its original function, the Hollands College is arguably the best preserved remnant of the defunct university.

The chapel and the library are the most impressive and valuable yet delicate parts of this cultural, historical and architectural heritage. The dining hall as well as the stairwell bring one directly back to the late 1700s.

Hollands College: A place of reflection and exchange

In 2010, the KU Leuven set up an advisory council for the Hollands College, which in turn established a heritage fund for the building. The aim is to collect as much resources as possible to preserve the building and its interior, as well as to work towards a full restoration that is increasingly necessary.

For these reasons, an NGO was set up in 2016 called the Vrienden van het Hollands College (Friends of the Hollands College) in order to promote and support the endeavours.

Furthermore, the KU Leuven is using the site for its “Metaforum“. The Metaforum is a meeting place for academic conversations, content and cultural exchanges. There are quiet rooms offered to academics called “reflectiekamers” for solitary thought processing.

Seminars, talks, discussion fora and concerts are often held by the Metaforum, for both academia and citizens alike.