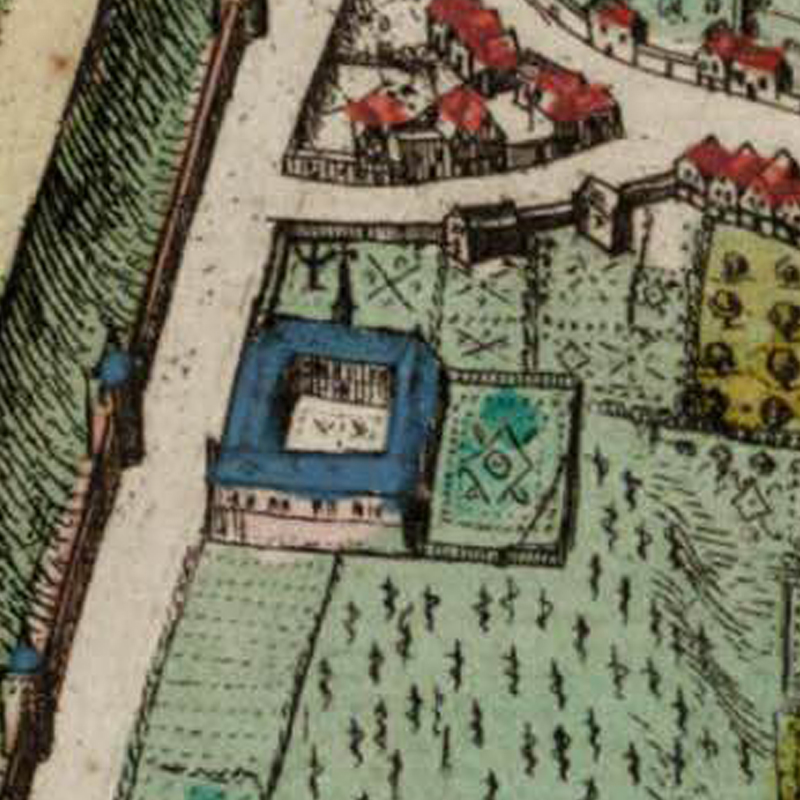 The Two Orders of the Discalced Carmelite Friars in Leuven: Placet vs Tacet

There were two communities of Discalced Carmelite Friars in Leuven:

The brothers from Tacet (St Joseph) were known as “Onze-Lieve-Vrouw Broeders” (Brothers of Our Lady), while those from Placet (St Albert) were simply the “Ongeschoeide Karmelieten” (Discalced Carmelite Friars). Nevertheless, both communities were closely related, for obvious reasons.

Already in the 1610 map by Jodocus (Joost) van der Baren, published in the same year in Justus Lipsius‘ “Lovanium” (marked as ’32’; see image below). The spot of the future monastery of “Ongeschoeide Karmelieten van Sint-Jozef” was already marked as “Praetorium: PLACET“.

The word “Placet” means in Latin “It is pleasing“. Situated on a hilltop between the outer city gate of Wijngaardpoort (today’s Brusselsepoort) and the towering “Verloren Kosttoren” right by the city walls, the estate commanded a pleasing spectacularly stunning view over the city.

In 1620, the “Ongeschoeide Karmelieten van Sint-Albertus” from Tacet intended to build a training seminary in the city of Tournai. This plan however was opposed by the Archduke Albert and Archduchess Isabella, for the very reason that Leuven itself was a centre of excellence for religious training. The rulers then wrote to the magistrate of Leuven requesting to build the seminary in question. This was swiftly granted on 7 December 1622, and the works started immediately on Placet.

Between 1653 and 1655, a beautiful Baroque chapel (considered very modern at that time) was built, thanks to the generosity of Don Stefanus de Gamarra, who was the Knight of St Jacob and Governor of Ghent. According to 19th century historian Edward van Even, the chapel had three altars, decorated with superb paintings by Gaspar de Crayer.

Above the entrance of the compound was the engraving:

“QUOD MIHI SIT NOMEN SI FORTE ROGAVERIS HOSPES,
QUOD DOMINO PLACEAM JURE DEDERE PLACET.
You who visit ask me my name,
To which I reply PLACET, because to God I please.”

Van Even rightly pointed out that this is not correct, as the name ‘Placet‘ existed before the estate was turned into a monastery, as the appellation was published 12 years earlier in Lipsius’ book.

Like all religious communities in Leuven, the “Ongeschoeide Karmelieten van Sint-Jozef” were banned and the monastery was put up on auction in 1796. The estate was bought by a Thomas Gillet in Paris (contrary to the assertions of Hous; see below), who immediately demolished the Placet monastery, including the beautiful Baroque chapel.

The Notes of Jan Baptist Hous

Before we go further in the story of the “Ongeschoeide Karmelieten van Sint-Jozef“, we have to mention the notes by a certain Leuven inhabitant, Mr Jan Baptist Hous. Living through the tumultuous period of the French invasion, Hous documented his observations in his notes, which he kept meticulously. Hous died on 14 April 1830, six months after he had written his final notes and four months before the rebellion that led to the creation of Belgium. After his death, Hous’ notes came into the possession of his son-in-law Lameere, who was working in a publishing house and he was author of the book “Beschrijf van oud en nieuw Loven” (Description of Old and New Leuven, 1829). Thanks to Hous’ notes that were included by Lameere, city archivist and Leuven historian Edward van Even was able to add such firsthand accounts to his monumentale work “Louvain dans le passé et dans le présent” (Leuven in the past and in the present, 1895).

And in Hous’ own words about Placet’s destruction:

But not all was lost. While most of the Placet buildings were broken down, some residual constructions still remained. In 1887, some eighty years after its destruction, the order of the “Broeders van de Christelijke scholen” (Brothers of Christian Schools) bought over the ruins in order to build their monastery complex and run a free primary school there. On this two hectare of land, the friars erected an impressive neo-gothic complex that rose above the skyline of Leuven when completed in 1890. The chapel of the new monastery was filled with frescoes and glass windows by Ghent glass artist Gustaaf Ladon and its interior was decorated with artwork by students from Ghent’s Sint-Lucasschool. This curious link with Ghent once again resurfaced.

Children who attended the school and the inhabitants in the neighbourhood gave the friars the nickname of “Slabberdoeken” which means “sloppy cloth“, referring to the hood of the white habit worn by the friars.

However, the monastery and the school of the “Broeders van de Christelijke scholen” at Placet did not last more than a hundred years. In 1980, the decline of the order meant that the buildings had to give way to something else. And they did.

Sold to a residential project developer, the former site of the monastery of the “Slabberdoeken” friars was turned into a modern housing complex royally named “Keizershof“. But fortunately, the project was done with much respect to not just the “Broeders van de Christelijke scholen” but also to the “Ongeschoeide Karmelieten van Sint-Jozef“.

The central tower block that was erected as the centrepiece of the project, commanding an exclusive view of the city, stood squarely on the site of the former choir of the Baroque chapel of the “Ongeschoeide Karmelieten van Sint-Jozef”.

The main entrance gate of the “Broeders van de Christelijke scholen” was completely preserved and refurbished to serve as the main entrance to the housing complex. A small chapel, dedicated to Virgin Mary, was also preserved in a corner of the back garden.

Today, you can still find traces of thr original monastery of the Ongeschoeide Karmelieten van Sint-Jozef on the site. A youth counselling centre called Terwende was built on the site of the farmhouse of the monastery, which was kept by the Broeders van de Christelijke scholen.

All the enclosing red brick walls from Terwende to the back of the Keizershof are from the original 17th century Placet monastery. Even the wall right of the main entrance gate was from 17th century.

The site where the school run by the Slabberdoeken friars now is the student residential block of the KU Leuven university. The Sint-Janschool that borders Brusselsstraat cutely retains the nickname of Slabberdoeken.