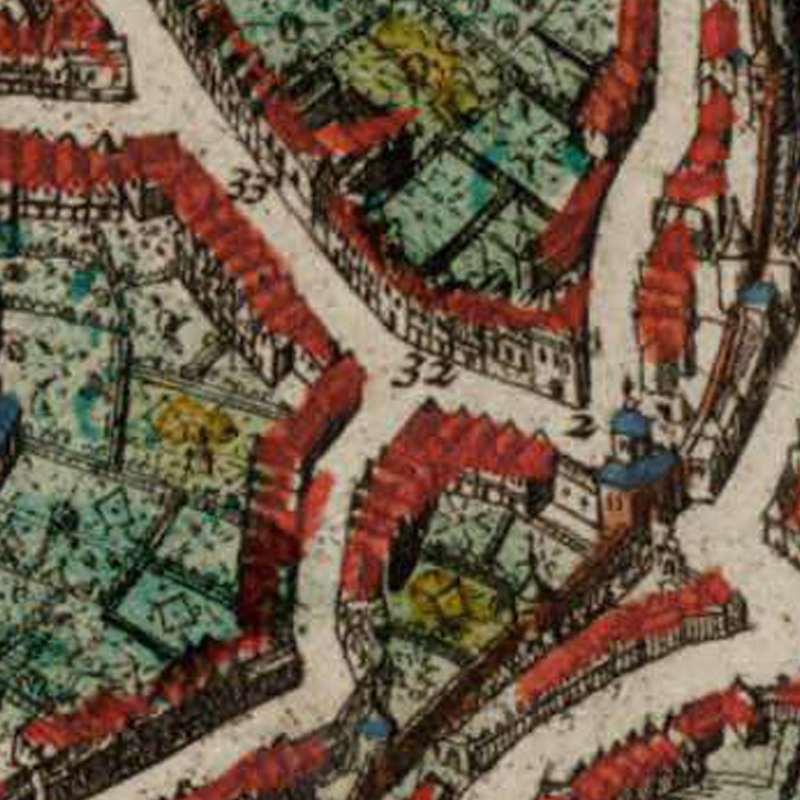 Before he became the Bishop of ‘s-Hertogenbosch (known colloquially as ‘Den Bosch‘), Nicolaas Zoesius founded a religious college in Leuven in 1604, in his residence in the city. This college was located on the Graanmarkt and very close to the Clarissenklooster (Convent of the Poor Claires) within the first city walls and a stone’s throw away from the Sint-Michielspoort and Sint-Michielskerk.

Once he became the Bishop of ‘s-Hertogenbosch, he established a seminary there in the Duchy of S’Hertogenbos called the Arme Fraterhuis “house of the poor brothers” (1617-1622) and Zoesius wanted the graduates from this seminary to continue their education in Leuven, in his College van S’Hertogenbos. After he died in 1625, he donated his full inheritance to the College.

Yet four years later, in 1629, with the Siege of ‘s-Hertogenbosch by Protestant forces, the diocese disappeared from the map. Once a Catholic stronghold, ‘s-Hertogenbosch was no longer so. Officially, the “Hollandse Zending” (Holland Mission) took over all matters related to the Catholic church in the liberated provinces and the College van S’Hertogenbos was nominally transferred under their administration. Yet there was no official relationship between the College and the mission.

The College van S’Hertogenbos was abolished together with the rest of the University of Leuven by the French occupiers in 1797.

In 1806, the College van S’Hertogenbos was sold to a certain Jean-Baptist Moreels, who tore it down and replaced it with private houses.

The College was dedicated to the Saint Willibrord from Northumbria (658 – 739). Willibrord was the first Anglo-Saxon to have travelled to Rome, not once but twice. He also tried to convert the Frisians, which is why he was known as the Apostle to the Frisians. After having established the first monastery in Utrecht, Willibrord became the first Bishop of Utrecht.

The location of the College van S’Hertogenbos is in the corner between the Herbert Hooverplein and the Ladeuzeplein.