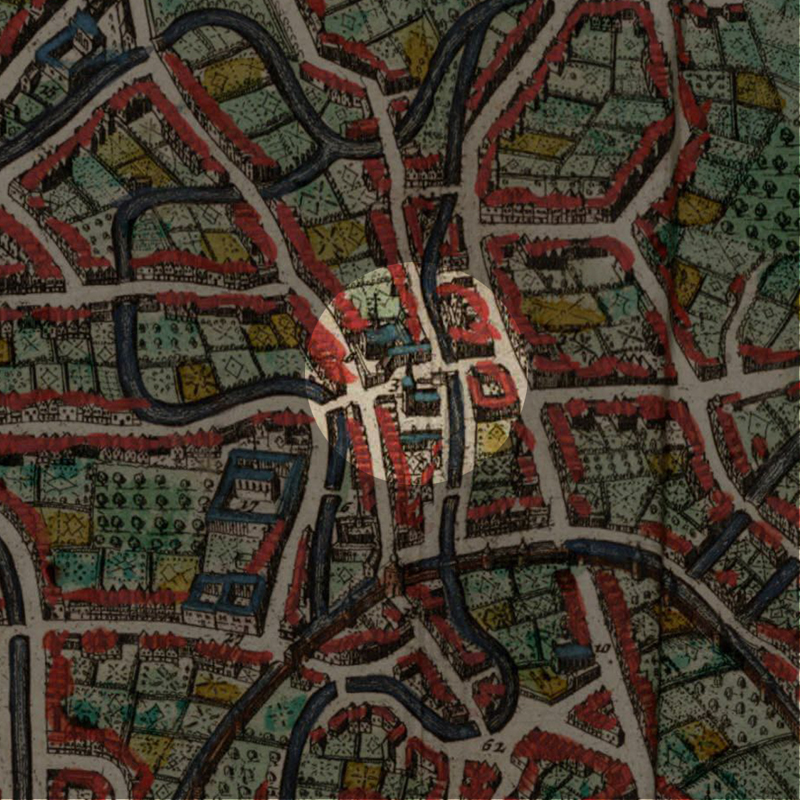 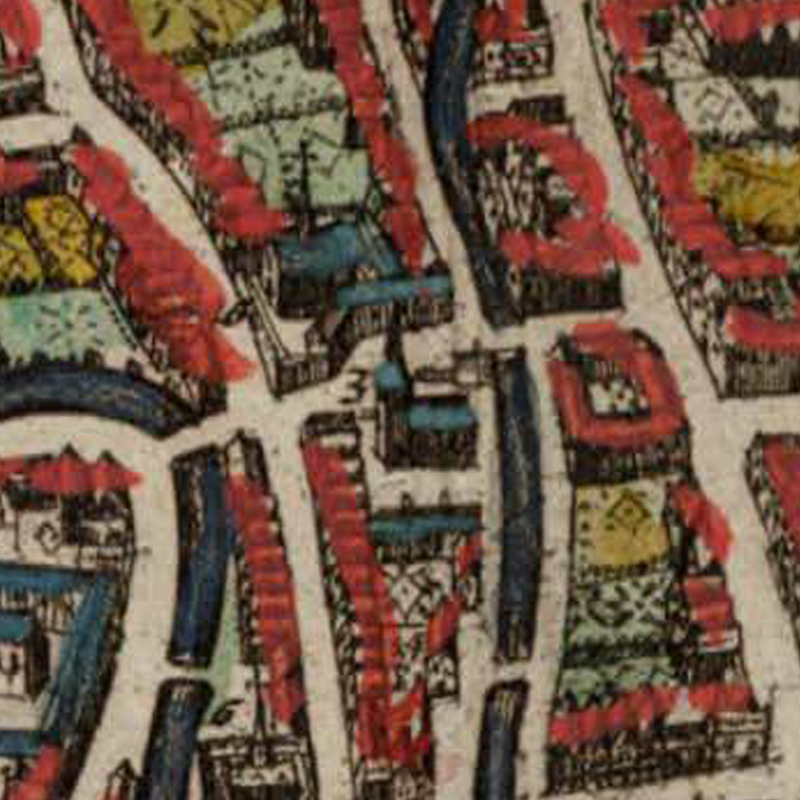 The new church of the priory, that was built soon after 1206, became the parish church of the newly founded Saint Gertrude’s parish – one of the parishes in the inner city of Leuven that split from the main Saint Peter’s parish. Thanks to the financial support of Duke John I in 1298, the parish was further built up and its property enlarged to both banks of the River Dijle. Important but unidentified construction work was described by its Parish Priest Godefroid d’Udekem (1307-1320) and a large part of reconstruction took place after a fire in 1326.

The site occupied a rectangle of 150 x 120 metres, bordered by the Mechelsestraat in the west, the Halfmaartstraat in the north and the Vaartstraat in the east. The southern border belongs to the former Abbey domain formed by the Leibeek stream, that was in 1879-1882 covered for the construction of the Karel van Lotharingenstraat.

Unfortunately, not much of the original construction is left due to the industrialised nature of the neighbourhood in the 19th century, the lousy interventions by its parish priest Armand Thiéry before and after the first world war, the bombing in May 1944, the afterwar restaurations etc. (Source)

One of the Seven Wonders of Leuven: The Tower without Nails

The Saint Gertrude’s Church is one of the few remaining seven wonders of Leuven: The Tower without Nails. According to records, the church tower was built entirely in stone, without the use of nails or wood.

The Sins of Armand Thiéry

After the first world war, much of the abbey was destroyed. If you walk past the church tower, you will find yourself in an old wing of the former abbey. Here, bits and pieces of destroyed facades from all over the city are recycled in this old wing, now they are apartments and houses of common people. This was because the parish priest Armand Thiéry, instead of rebuilding the abbey, turned it into a strange architectural puzzle, and destroying it forever.

There is now a Scouts museum by the bank of the Dijle River. It is likely that there is a vault under the building linked to the church. But the ground is so unstable it is impossible to verify this anymore. (Source)

The sculpted wooden choir pew by Mathys de Wayere from 1540

The church boasts of an old choir pew dating from 1540, featuring up at 500 personalities from the Old and New Testaments and a few saints. The piece was created by Mathys de Wayere from Brussels. Unfortunately, the Allied bombed the church in the second world war and the pew, and the whole abbey, was severely destroyed.

Thanks to the photographs of each chair taken by a Nazi officer, Leuven was able to restore the whole artifact.

The pieces of a darker colour are the originals from the 16th century.

There is a precious clay figure of the saint that dates back to the early Middle Ages.

The whole abbey site is now a residential area, including a Scouts Museum. The church is definitely worth a visit, but the tower is off limits as it is structurally unsafe. Already, for such a tall stone tower to be built without nails to have survived two world wars, it was something of a miracle.