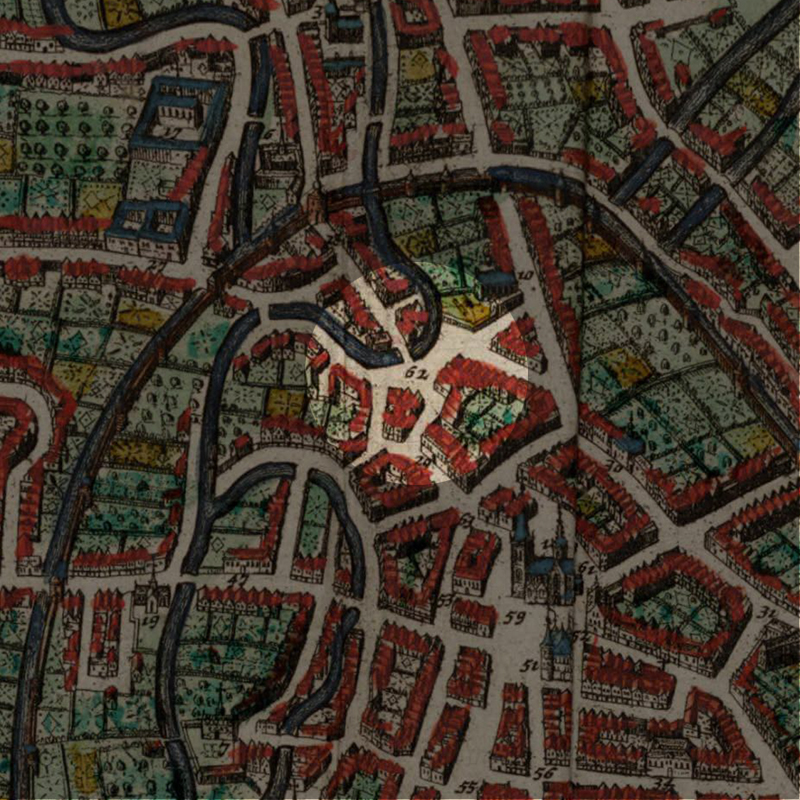 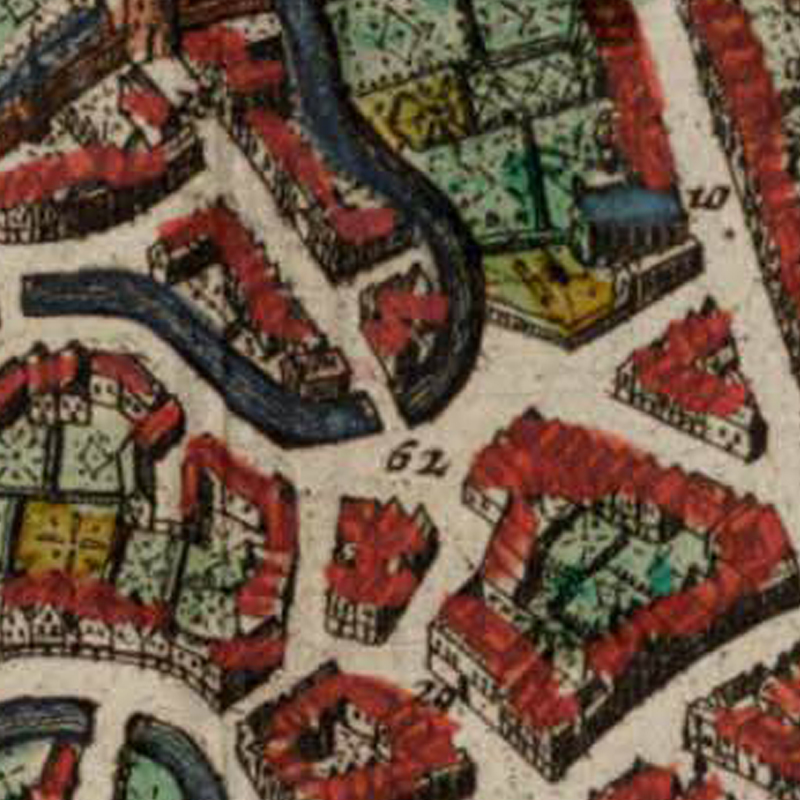 A long long time ago, there was an arm of the River Dijle that ran from where the Lei and the Dirk Boutslaan meet today, along the Craenendonck into today’s Vismarkt, then went up through the Karel van Lotharingenstraat (on the right of the first city walls) which feeds into the water there running northwards towards the foot of the Keizersberg.

The water here was deep. This was Leuven’s city harbour, where ships arrived from Antwerp in the north, through River Schelde, then down to River Dijle, to ply their trade of fresh fish and other seafood.

Some historians believe this spot could be Leuven’s first nuclear settlement, as town settlements then often appeared at strategic trading posts along rivers and seas.

Leuven’s harbour soon became its fish market, called ‘Vischmerkt‘. The market was originally property of the Duke. But in 1327, the then Duke of Brabant John III transferred it to the city, in exchange for a yearly compensation.

The Vismarkt continued to thrive for the next four centuries.

In 1762-1764, two rows of stalls were installed for fishmongers. In 1794, the whole structure was heightened to street-level, as ships no longer came into the ancient harbour when Leuven’s canal called the Vaart leading all the way to Mechelen was dug in 1750.

The Decline of the Vismarkt

By the middle of the 18th century, with the harbour activities shifted north to the Vaart (resulting also in the renaming of the nearby Coestraet [Cow Straat] to Vaartstraat), the Vismarkt also began to lose its economic appeal as a seafood market. Various renovations and the partial covering up of the course of the Dijle also affected the market’s popularity, even with a new large, open-air pavilion built in 1884.

By 1972, the whole structure was completely demolished, replaced by a carpark, that still exists today.

Today’s Craenendonck(street) led the water into the Vismarkt. In the 14th century, this waterway was called the ‘Bedelaersweg‘ (Beggar’s Way), probably referring to the number of beggars gathered here. Under French occupation, this was called the ‘Rue Sans Pont‘, referring to the fact that there was no bridge to cross from one side of the river to the other. What was certain, was the Craenendonck was since the 12th century the beginning of the harbour of Vismarkt. It was only built on one side (odd numbers) while the other side was empty, apart from the back of the houses along today’s Mechelsestraat. The word ‘Craenendonck‘ means ‘crane/tap’ + ‘hill by the water’. However fitting it sounds, this was not the original typographical name of this spot, as the waterway/street was only renamed in 1826 after Marcel Craenendonck, founder of the College van Craenendonck (1574-1797) located along today’s Dirk Boutslaan.

Where the Craenendonck meets the Mechelsestraat at the Vismarkt, there used to be a chapel dedicated to Sint-Anna (St Anne), where today a café called ‘De Blauwe Kater‘ stands.

When you look at the 1649 map, it is the brown building after you cross the bridge on the left of the Mechelsestraat. In August 1795, this chapel was demolished so that the stones could be recycled to repair a bridge nearby. Close to the chapel, fishmongers used to sell damaged fish at a discounted price, hence until the end of 18th century, discounted (bad) fish used to be called ‘fish bought at the fish market of Sint-Anna‘. With the demolition of the Sint-Anna chapel in 1795, the discounted fish outlet was moved to the current day Vissersstraat.

What is known today as the first part of Mechelsestraat that runs from the Mathieu de Layensplein to Vismarkt, was called the ‘Schipstraet’ (Shipstreet). This street leads directly to the bridge of the Vismarkt, called the ‘Schipbrugge‘ (Ship Bridge). This bridge was later called the ‘Vischbrugge‘ (Fish Bridge). You can see how this bridge looks like on the 1649 map.

Once one crossed the Schipbrugge, one gets to the other side of the River Dijle into the second half of today’s Mechelsestraat. In the Middle Ages, this was called the Borchstraet (Castle Street), because it led directly to the Castle on the Keizersberg. When one turned right, one would find a long but narrow alley that cut through to further down the river on the Karel van Lotharingenstraat. Known as the ‘Werf‘ – the wharf – this alley bore testament to old harbour activities of the Vismarkt, but it had all but disappeared by 1880. If you look at the map of 1649, you can definitely see it there.

In 1236, the Augustinian monks arrived in Leuven and settled down beside a Chapel to Saint John the Baptist. The saint, was popularly worshipped by fishermen who were living and selling their fish by the arm of the Dijle river here on the Vismarkt. The community soon grew to become the most influential religious community in Leuven – the Augustijnenklooster. Up until before the end of the 18th century when the abbey was abolished by the French invaders, it was the richest and most impressive abbey of Leuven. More information about the Augustijnenklooster can be found here.

In spite of having lost all of its medieval features, even its ancient waters, the Vismarkt surprisingly preserved the only entry to the ‘Collegium Trilingue‘ – the language school founded by Hieronymus van Busleyden in 1517. Today’s a protected heritage site, this entrance way preserved some of its 16th century features and is renamed ‘Busleydengang‘.

It is incomprehensible that the Vismarkt is being allowed to remain a carpark, given its importance in the development of Leuven as the capital of the Duchy of Brabant, and the continued economic activities that happened here for six centuries or more.

There have been public outcry regarding the redevelopment of the Vismarkt and the city even held public consultations about the future of the Vismarkt. To date, there has been no concrete plan announced.

If you are out to discover the Vismarkt, do not forget to visit the Mechelsestraat (the part mentioned that was called the Schipstraat), but because it has to be one of the most pleasant spots nowadays in Leuven! A pedastrianised shipping street, this part of the Mechelsestraat encapsulates much of the medieval nature of Oud Leuven, rarely seen elsewhere in the city.

Here are some of the oldest houses with the quaintest names (think Harry Potter):

Edmond Fierlants, 1865, KU Leuven Universiteitsarchief (Photo)
Unknown, 1851-1900, © KIK-IRPA, Brussels (Photo)
Craenendonck, direction Vismarkt.
Vismarkt today. On the left, where the café stands used to be the spot of the Sint-Annakapelle.
Busleydengang. Only surviving entrance to the former Collegium Trilingue.
Vismarkt. Entrance to the former Augustijnenklooster.
The water still runs from the Vismarkt, under the Karel de Lotharingenstraat. Left of the street was the first city wall.
Standing on the spot of the Vismarkt where the bridge used to be, looking back at Schipstraat.
First part of Mechelsestraat leading to the Vismarkt. This street used to be called the Schipstraat.
VIEW ALL LOCATIONS OF OUD LEUVEN