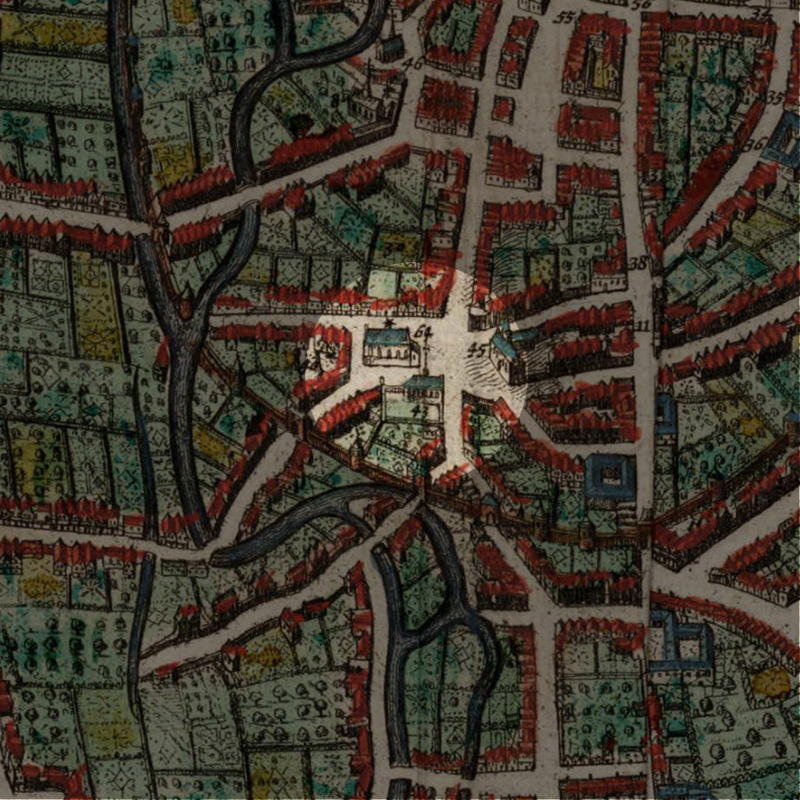 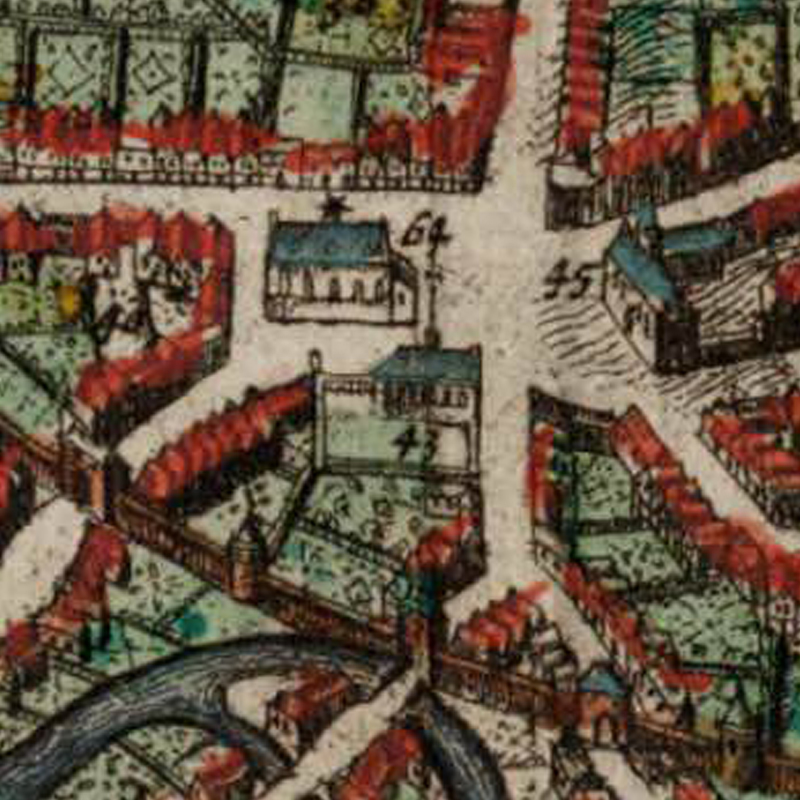 Following the Tudor Conquest of Ireland by the Kingdom of England from 1529-1603, ‘Irish colleges‘ were set up to educate the Irish refugees on the European mainland on their religion, their language and their culture. The flight of Irish Catholics reached its peak with the Anglican Reformation driven by the English King Henry VIII.

Imperial support for the Irish College

The Irish College in Leuven was set up in Flaithrí Ó Maolchonaire – Florentius (Florence) O’Conry – in 1607. O’Conry was the Archibishop of Tuam. Together with Irish Franciscan Aodh Mac Cathmhaoil – Hugh MacCaghwell/Hugo Cavellus – they travelled to Spain and obtained the firm support from the highest political level, Archduke Albert VII and his wife and co-monarch Isabella Clara Eugenia, rulers of the Habsburg Netherlands where Leuven was situated. Both Albert and Isabella, and the Pope himself, approved the founding of the college in Leuven. When the Irish College was established, named after St Anthony of Padua, the King of Spain Philip III even became the patron of the college.

Compared with the other colleges in Leuven, such strong and direct imperial support from members of the Habsburg family ruling the then-Holy Roman Empire was unprecedented.

Establishment at the Pig Market

It took the Irish College ten years before they found their permanent location. In 1617, two houses at the Pig Market (Varkensmarkt) were purchased and demolished to build the new Irish College.

Archduke Albert and Archduchess Isabella personally arrived in Leuven to lay the foundation stone on 9 May 1617, which is on display today in the college. The new Irish college was composed of a chapel with three wings, forming an inner cloister. For the southern wing, a part of the 11h-century first city walls had to be torn down. Part of the city walls that were not demolished can still be seen in the gardens of the college.

Once it was established, the Franciscan brothers of the Irish College not only provided training and education in Irish language, culture, and the Catholic faith, the college also functioned as a printing press and hostel, and was a well-known centre for the Irish diaspora on the European continent.

The Irish College of Leuven did not only maintain close ties with the Habsburg rulers in Spain (from whom they received donations right up until the 18th century even though the centre of power of the family shifted to Austria), it was constantly supported by the Irish nobility class. Such a support made the Irish College a centre of Irish counter-reformation in Western Europe and a continuous source of support for Irish independence.

After the French Invasion

The Battle of Fleurus in 1794 marked the definite end to the Habsburg rule of the Southern Netherlands, and the Duchy of Brabant fell into French hands. The brutal terror state run by these invaders ended the Leuven University in 1797, and like all the other colleges in Leuven, the Franciscans at the Irish College had to flee.

It’s really ‘not what you know but who you know‘ that helps one in life. The close ties of the Irish Franciscans with the Church and with royalty helped them secure a hiding place before the French invaders arrived. Friar Guardian James Cowan and his colleagues, hid in the Castle Ter Elst in Tildonk, thanks to the help of Baron Philippe-Ghislain Snoy who owned the castle. Today, nothing is left of the castle but the fish ponds were apparently the remains of the exiled Irish College in Tildonk.

The French invaders divided the college up in two lots to be sold. James Cowan, with help from his rich and powerful friends, managed to secure a part of the property.

For a while the premises were a school for girls, which then moved to the Hollands College opposite. French troops also used the Irish College as a military camp while a porcelain workshop and a haybarn were occupied the buildings. From 1828 to 1922, the Brothers of Love (Broeders van Liefde) ran a boys’ school.

It was only in 1922 when the Irish Franciscans got their buildings back, and they turned it into a student hostel for Irish students in Leuven.

The original entrance gate of the Irish College is located on the then Pig Market (Varkensmarkt). The square then changed its name to Sint-Anthoniusplein (after the St Anthony Chapel facing the square) and more recently Pater-Damiaansplein (after the self-sacrificing priest Father Damien whose body is now on display in the chapel).

At the top of the gateway is a small sculpture of St Anthony of Padua, and below it, the name of the college and its founding year: “DOM Collegium S. Antonii Paduani ANNO 1607“.

Around the arch of the gate, lies the inscription:

Buried at the College

On the floor of one of the wings, you can still see the tombstones of some of the people who are buried there, including the founder Archbishop Florentius (Florence) O’Conry, Bishop Dominic de Burgo and Dominic Lynch. A number of the exiled O’Neills and O’Donnells are also buried there.

The Leuven Institute for Ireland in Europe

The Irish College received a new role in 1984 when the Leuven Institute for Ireland in Europe was established as a non-profit organisation in a part of the college to “maximise the promotion, exposure and opportunities for the island of Ireland through the management of the historic Irish College Leuven as an international residential centre for education, training and research in European and international affairs“. The institute runs courses and training for Irish students, and regularly conducts seminars in EU affairs.

A Monastery Hotel and Conference Venue

When not hosting Irish students and researchers, the lodging parts of the Irish College serve as a hotel for tourists and conference venue for companies. It provides a unique monastery experience, complete with a gourmet restaurant and a beautiful garden for lounging. The 17th century chapel now serves as a state-of-the-art auditorium.