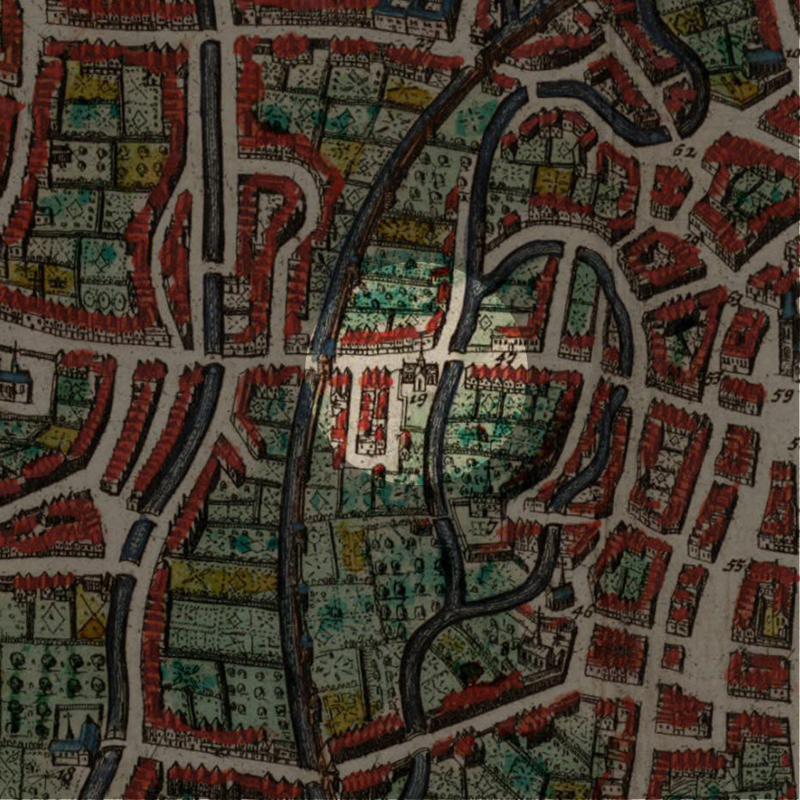 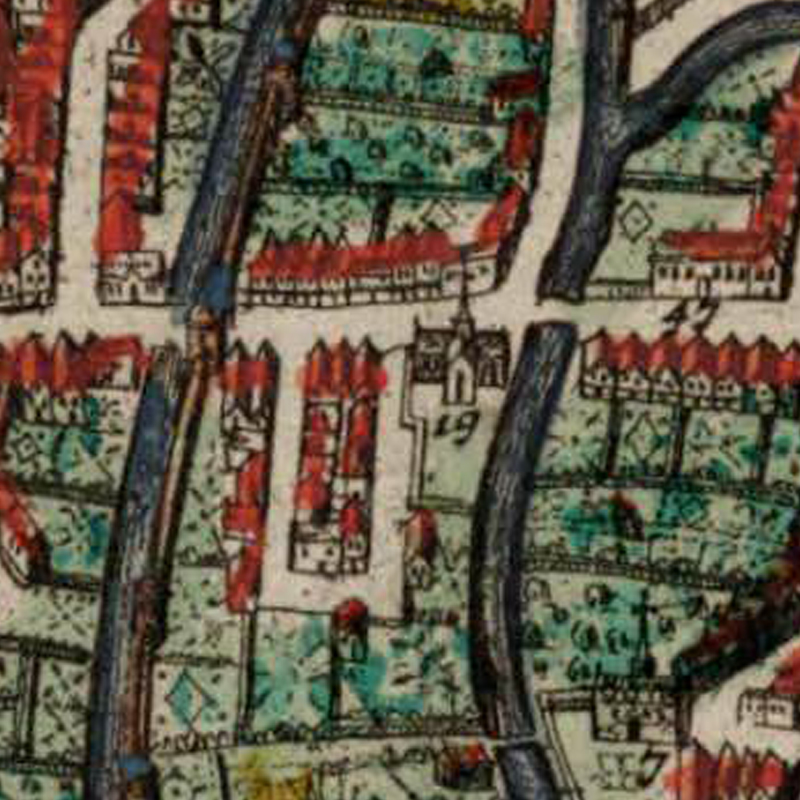 Possibly the Oldest Hospital of Belgium

At its origin, the word “guesthouse” (gasthuis) referred to both a hotel and a hospital, when the French versions of the word entered into the English language twice to denote the split in the meaning a few centuries later. The same situation happened in Brabant, when weary travellers such as pilgrims, were able to get a bed to spend the night, as well as have their illness or injuries tended to by nuns running the establishment.

The Sint-Elizabethgasthuis (St Elisabeth Guesthouse) was such a guesthouse, established in 1090-1095 in the area of the current Sint-Jacobskerk. In the year 1222, the guesthouse moved to the current location on the west bank of the Dijle inside the city walls.

The site was called the ‘s Hertogeneiland – The Duke’s Island – because it was locked by the two arms of the Dijle river. Another donation of the Duke Hendrik III of Brabant was the Predikherenkerk, built in 1234.

In 1363, the hospital was severely destroyed in a fire, which led to a period of material and spiritual loss. It was until 1479, a professor at the Leuven University called Nikolaas Hellens who called for a reorganisation of the hospital. Apart from raising money to rebuild the buildings, a community of nuns living under the Augustinian Order was organised to run the establishment.

This is why the hospital was also called the Augustinessenklooster (Convent of the Augustinian Sisters).

Two more fires hit the hospital in 1632 en 1718, that in the second half of the 18th century, extensive renovation took place. But alas in 1790, the French Revolution hit Leuven. The convent had to be dismantled.

In 1830, the Commission for Public Hospital, forerunner of today’s public social agency OCMW, decided that the Sint-Elisabethgasthuis could no longer meet the hygiene standards of the day. As a consequence, the decade of 1830-1840 saw the West Bank part of the hospital and convent completely torn down to make way for the new neo-classical style building designed by Alexander Van Arenbergh.

Inspired by the Hôpital Saint-André in Bordeaux, France, the new hospital was only completed in 1865 even though it started taking in patients in 1849. This hospital was not only beautiful, it could take 250 patients in its huge halls of 24 beds each.

As the hospital continued to expand, the 13th-century entrance to the large “sickbay” hall (today’s Romaanse Poort) of the hospital called the Beyaert was removed, and the hall broken down.

Role in the Great Split of the Leuven University

The hospital was not only a public hospital, but also an academic research facility. This link dated back to Nikolaas Hellens’ reorganisation in 1479. But with the rise of French as the language of the ruling class and the bourgeoisie especially after independence, the conflict between the local Dutch-speaking population and French-speaking upper class became increasingly violent. It was here in Leuven’s hospital that one of the main conflicts happened.

In the afterwar years of 1950-60s, coupled with the rise of the Flemish nationalistic movement, patients at the Sint-Pietersziekenhuis are upset that they could not understand or be understood by the French-speaking doctors. This led to many cases of misdiagnosis that made the difference between life and death.

One of the first language splits that took place at the Leuven University: in 1963, French-speaking doctors decided to build their own clinic outside Brussels. This led to the Sint-Pietersziekenhuis being an exclusively Dutch-speaking hospital. When the Flemish student riots of 1968 shook Leuven, leading to the complete split of the University into Dutch (remaining in Leuven) and French (relocated to a new city called Louvain-la-Neuve, located in Wallonia), the remaining Dutch-speaking medical professors decided to expand the hospital to outside the city centre on the Gasthuisberg.

Although the expansion to Gasthuisberg was started in 1971, the need for medical care continued to grow, and the authorities decided to build a second wing in 1975 to realise the 20-year-old architectural plans of the trio Cloquet, Van Montfort and Vandeput, in the 1950s.

Around 13.6 million euros was spent in 1977 to build a 13th-floor yellow building, that completely consumed the original neo-classical building of Alexander Van Arenbergh.

It was an architectural disaster no one at the time realised.

Then in the 1980s, a second shorter building was built in front of the yellow one, with 10 floors of concrete nightmares. By the time the building was complete, two things rendered it completely useless:

A national medicial crisis hit the country: it was realised that there was a surplus of hospital beds. As a result, the hospital could not open the beds to anyone in order to save costs. Ironically, the whole building had to be heated in order to maintain the right temperature for the whole facility. This went on for two decades.

Then when there was a suggestion to tear it down, specialists discovered the whole building was filled with asbestos. Special care needs to be taken and the state could not afford the demolition.

This was a scandal that shocked and numbed the political senses of Leuven citizens for half a century.

The End of 800 years of Medical History in Leuven

With the departure of the hospital staff on 12 July 2019, the history of Belgium’s oldest hospital came to an end. In its place, is the new “Hertogensite” (The Duke’s Site), harking back to the site’s original 13th century owner – the Duke of Brabant.

The Dijle River will once again see the light of the day. There will be a park, a theatre with 2 halls of 1000 and 400 seats. The 12th-century old city walls and defence towers will be preserved. To preserve the medical heritage of the site, there will be Belgium’s first “Welzijnstoren” (welfare towers) to function as special “healthcare” platform, whatever that means. The most notable new element is the HistarUZ, a museum dedicated to the UZ Leuven – from Sint-Elizabethgasthuis (St Elisabeth Guesthouse) to Universiteit Ziekenhuis Leuven (University Hospital of Leuven).

Surprisingly, there is one item that remains of the original 13th century Sint-Elizabethgasthuis: the so-called “Romaanse Poort” (Roman Gate) was preserved and moved to the East Bank when the building was broken down in 1830-1840. It is now the entrance to the 30CC, Leuven’s culture centre, on Number 63 on the Brusselsestraat. The figureheads on the gate were a tribute to the nuns who used to run the hospital. Apart from that, some of the walls under the current 16th-century chapel also date from the same period. The whole convent site on the East Bank was renovated from 1980-2000, paying special attention to its historical value.

Today, if you go behind the Romaanse Poort, you can see the Dijle river running under it and the beautiful convent complex over the water.

The 17th-century coach house of the Sint-Elizabethgasthuis is located behind the chapel. After a fire in 1993, the site was restored as a concert hall of the 30CC culture centre, which also runs the chapel as an exhibition hall. There is also a restaurant located inside the courtyard.

Behind the two ugly buildings that will be torn down are remnants of the 12th-century city walls and towers. They are extremely vulnerable and delicate, and are a rarity in any city in Belgium – certainly a sight to behold.

The whole West bank of the original site is being developed into the “Hertogensite” – with private apartments, public parks and spaces, art facilities and healthcare platform.