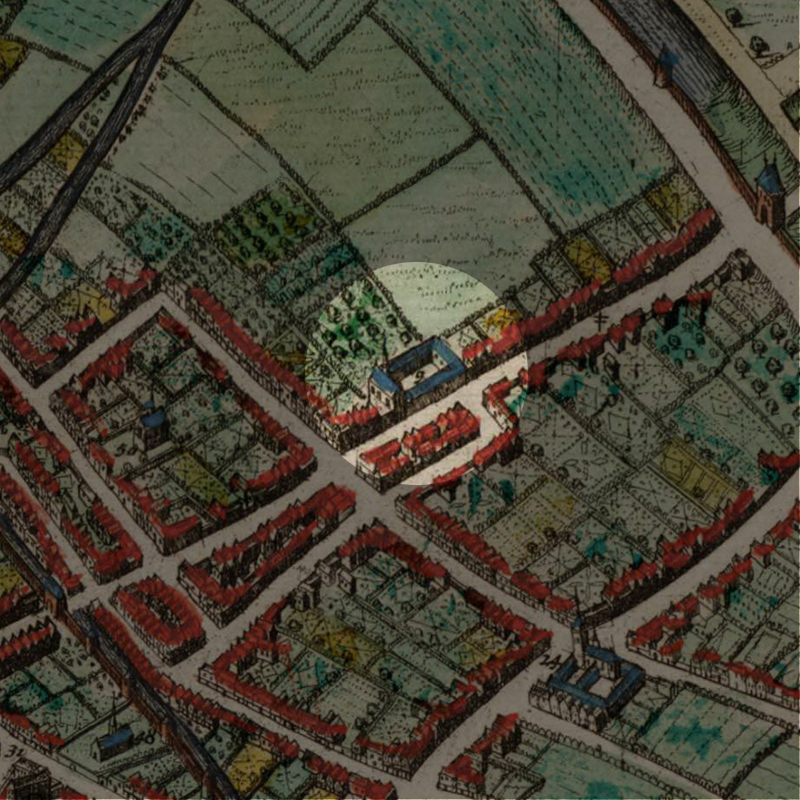 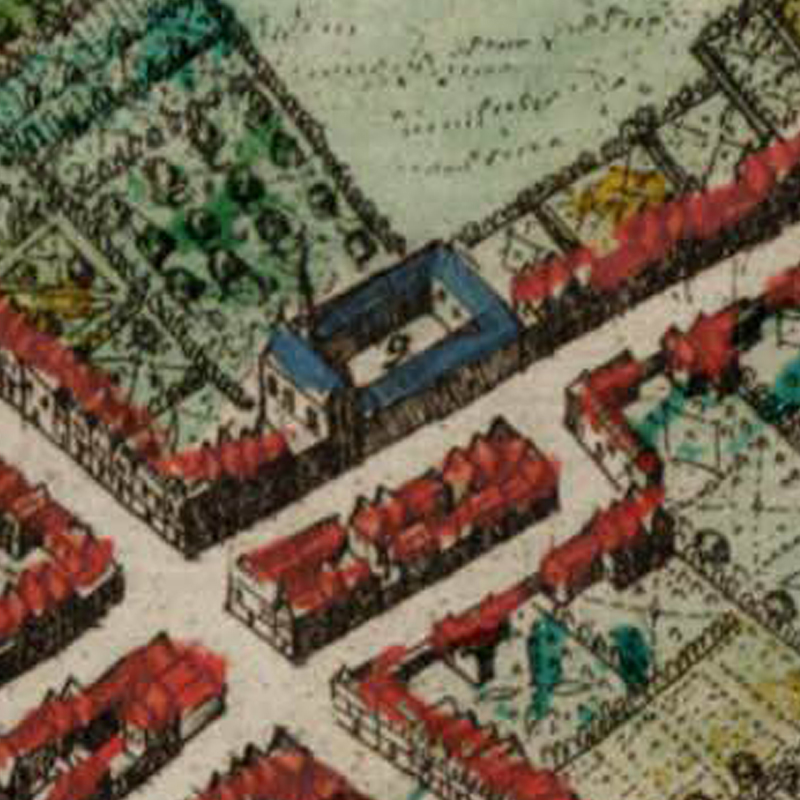 The Chapel of Sint Généviève

As early as 1356/57, there was a record of a chapel on this spot dedicated to Sint Généviève (Saint Genevieve), with a relic of hers, although historian A. Meulemans thinks the chapel most likely predates this period. Together with a chapel, this was also the earliest “gasthuis” (guesthouse) mentioned in Leuven. At that time, the guesthouse catered to poor travelers and homeless people, while the chapel was a prayer house for the men of the “Oppendorp“, the village located here just outside the city gate.

The chapel was rebuilt in 1470, and is now the only material remains of the former guesthouse.

By 1545, through fusion with the Sint-Laurentiusgasthuis on the Brusselsestraat, the Sint-Genovevagasthuis was closed. The chapel itself was also closed by 1576.

Between this time and 1644, what happened to the building on this spot is unknown. Could it have been used by the Beghards of the Carmelite Order which is why the cartographer marked it as such?

Then in 1644, a certain Jacques Santvoort, deacon of the Sint-Jacobskapittel (St-Jacobs’ Chapter), opened an orphanage on this spot. But as the map was published in 1649, it is unclear whether this development was recorded by the cartographer.

The Monastery of the Minims

Only in 1656, the Minims took over the complex to make it their monastery. This was the beginning of the Miniemenklooster in Leuven. The Order of the Minims, founded by Francis of Paola (1416–1507), is a mendicant order. In the second half of the 17th century, the Minims built a new monastery building (the current H block) and gave the Gothic chapel a Baroque update. Then the French Revolution hit and in 1796, the monastery was closed and sold to the notary Jean Baptiste Desterdiu was a private residence.

Fortunately, the whole complex was taken over in 1834 and converted into a school for poor children by Pastor Pierre Joseph Vermeulen and Priest Martin Van Looy. Then the school was given to the nuns called the “Dochters van Maria” (Daughters of Maria) of the Paridaensinstituut. The nuns turned it into a girls’ school, which became a public school in 1982.

This is the beginning of the Miniemeninstituut, named after the friars and their monastery from before the French Revolution. The school maintains its Catholic nature, by preserving the original chapel and its functions. The secondary school offers only technical (TSO) and professional (BSO) courses, with about 400 pupils and it specialises in commerce and tourism.

So much as happened on this spot and it is easy to miss while wondering along the pedastrian shopping street Dietsestraat. You can still see on the facade of the chapel on the street itself, and above the door is a statue of a Minim friar.

It is a pity that the cartographer made a mistake about this spot but it also attests to the failing fortunes of the Sint-Genovevagasthuis at the time.

What I found really interesting is this is the exact spot that still retains its extra-muros (“outside the city wall”, the first city calls of Leuven) character from the 12th century. The busy shopping street Diestsestraat suddenly goes quiet once you reach the Miniemeninstituut, as if you have left the city.

The secondary school Miniemeninstituut occupies the whole compound of the Miniemenklooster. Not much has remained from the original Sint-Genovevagasthuis but the chapel itself was built on the original one from 1356.