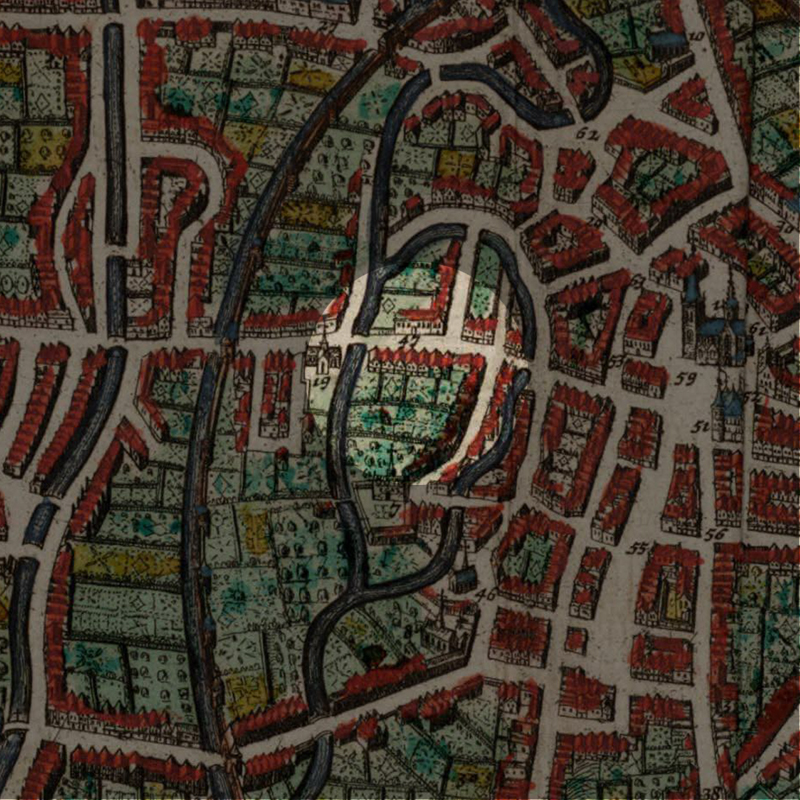 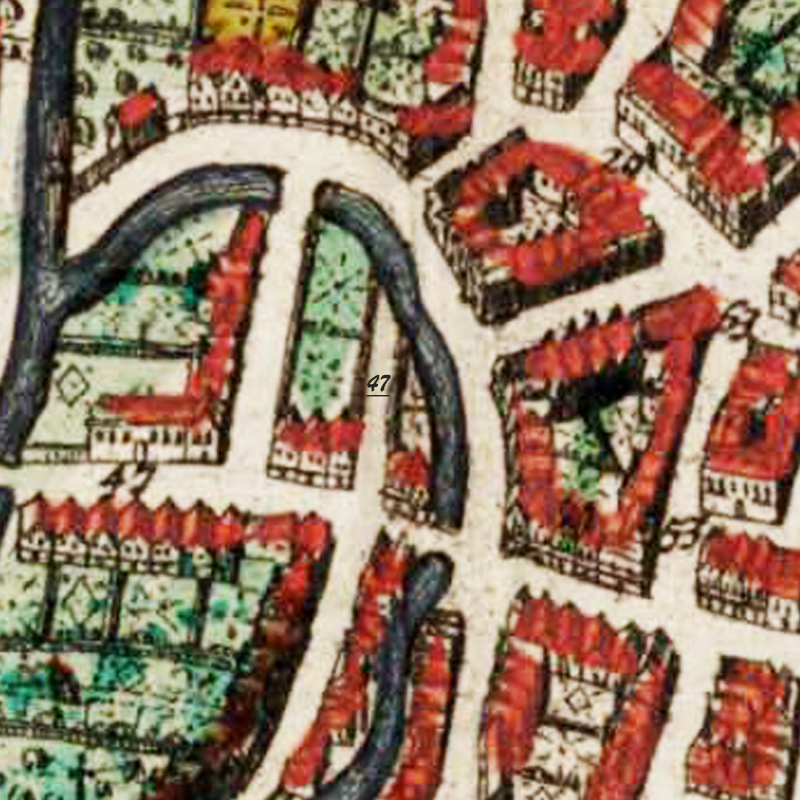 According to Leuven historian, Edward van Even, there used to be a school located on a sidestreet of the Brusselsestraat for poor boys.

The school was founded in 1651 by a priest named Antoon Le Pape, in a house on the Tabernakelstraat. Of a ‘modest appearance‘, the building had an inscription on its facade that said:

The city council gave the sum of 60 florins per year, to the Oratorian priests to provide the teaching.
With the ban on religious institutions during the French Occupation in 1797, the responsibility was passed to a secular teacher.

In the 14th century, this street was called ‘Dekenstraatje‘. This was because a Deacon from the Sint-Pieterskerk, Nicolaas van der Spect, used to live there.
During the French Occupation, the invaders changed its name to ‘Rue de la Fraternité‘.

Note that the road along the river called Amerikalaan is recent. Houses were built all the way to the water on this bank of the river back in the Middle Ages.

This was the Moutstraat (Malt Street).

The Moutstraat extends via a bridge over the river to the Slachtstraat, nowadays Dirk Boutslaan. The stone bridge today is roughly where the older bridge was. Slachtstraat means “Slaughter Street”, referring to the slaughterhouses, both open and close, that used to occupy this bank of the river all the way up to the Sint-Pieterskerk, opposite of which the Pensmarkt (Tripe Market) and the Vleeshuis (Meat Market) were located.

At the beginning of the Brusselsestraat, on the left side of the Moutstraat was a house called “T’Wint Ey” (Het Windei – The Bindweed)
On the right, the house was called “Het Audt Wit Peerdt” (Het Oude Witte Paard – The Old White Horse)

The “Het Windei” was of particular importance:
From 1482 to 1615, this was the Monastery of the Unreformed Carmelite Friars (Klooster van de Geschoeide Karmelieten) before they moved to the Ravenstraat.
In 1621, it fell into the hands of the local Commander of the Alden Biesen (in today’s Limburg) which set up here the College van de Teutoonse Orde (College of the Teutonic Order), often known as the Duits College (German College).
Under the Austrian Habsburg rule, it became the Royal School for the Children of Military Officers. After the French Occupation, it became a community school for girls. By the early 1900s, it became a nursery and was later closed down by integrating into the Instituut De Wandeleer located on the Lei.

Apparently, in the 15th century, an inn on the Moutstraat called De Stove was open for public bathing.

In 1840, the part of the street that linked to the bridge was privatised by Jan Franciscus Draelents. The bridge was itself led up to a gate above which was written “Estaminet-Logement”.

Because of this, the Moutstraat became a close alley like Tabernakelstraat, and it became known as the ‘Moutgang’ instead.

The Steenstraat and the Steenbrug

Both Tabernakelstraat and Moutstraat are side streets of the Brusselsestraat.

As explained in the article about the Brusselsepoort, this road that leads from the Grote Markt to the city gate is today called the ‘Brusselsestraat‘ (Brussels Street).

That, however, was a 19th century development.

In the Middle Ages, the street was originally divided into three sections:

The reason why ‘Steenstraat‘ (Stone Street) was named so, is because it was the first paved street of Leuven.

Possibly one of the oldest streets of Leuven, the Steenstraat is historically significant because it was most likely part of a Roman highway in the Gallo-Roman period.

What’s also interesting about Steenstraat is that the road crosses the River Dijle and the bridge still exists today, although it seems to have lost its name. The original name of this bridge in the Middle Ages is ‘Steenbrug‘ (Stone Bridge), not only because it was built of stone, but more as a reference to the name of the street. 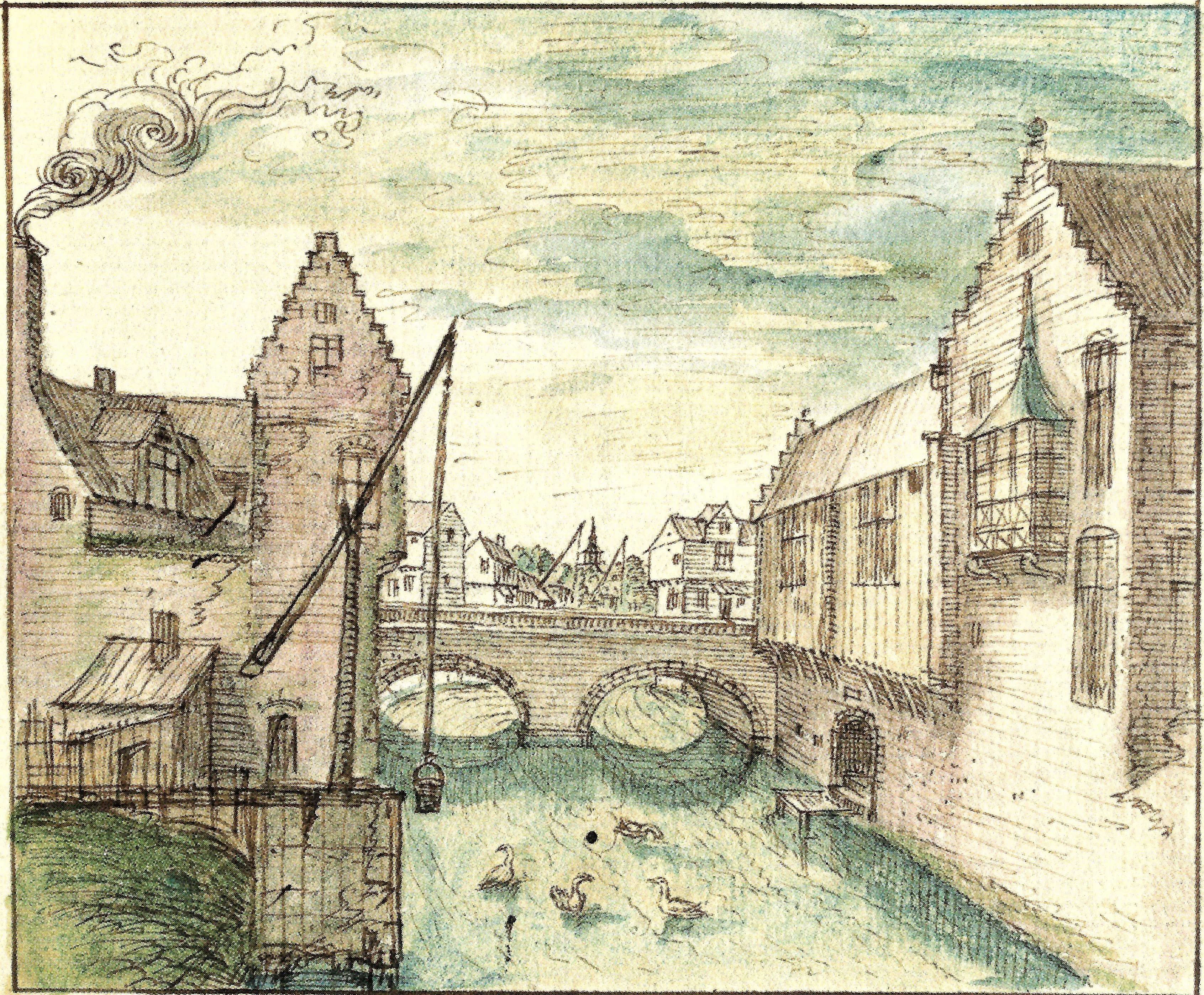 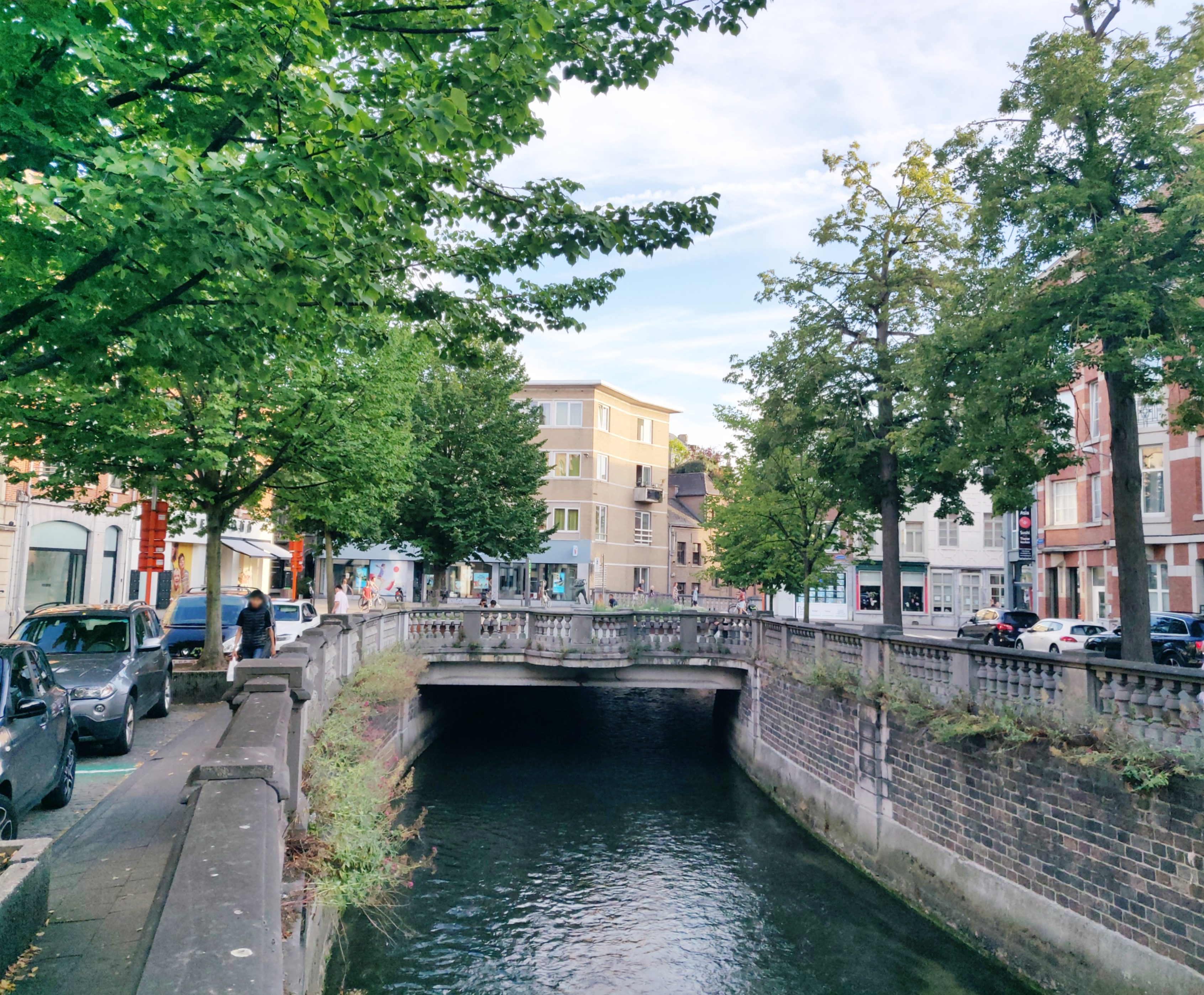 The school, the Tabernakelstraat and the Moutstraat, together with the whole slaughterhouse quarter, was completely sanitised in the beginning of the 20th century. With the two World Wars, the medieval nature of the whole area was completely gone.

The Tabernakelstraat used to be where the restaurant ‘Taste of Asia’ is now located.
The Moutstraat is now the Ibis Hotel, specifically the entrance to its carpark, directly opposite the restaurant ‘House of Lalibela’.