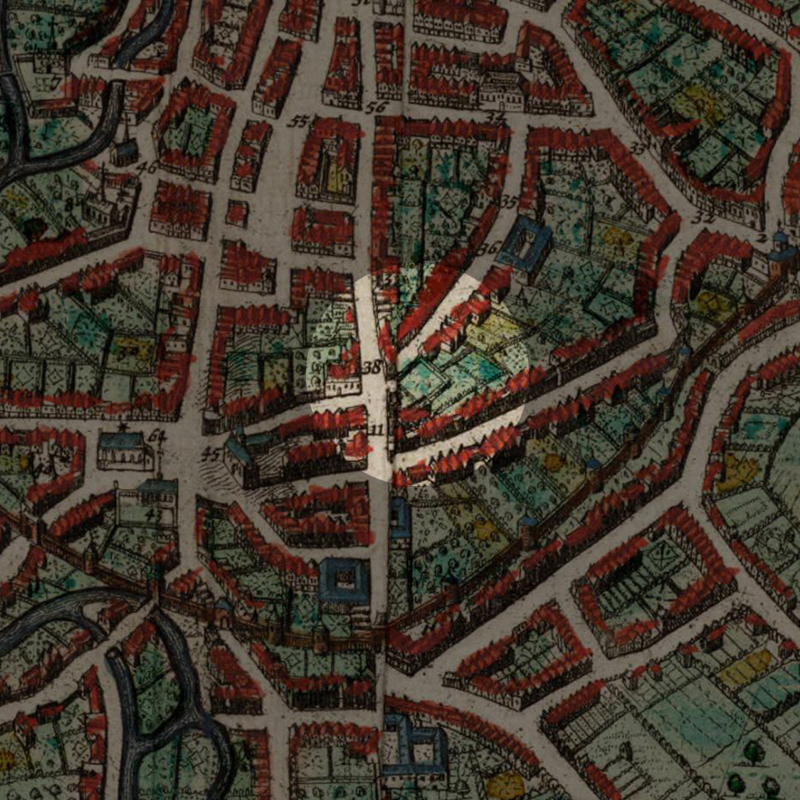 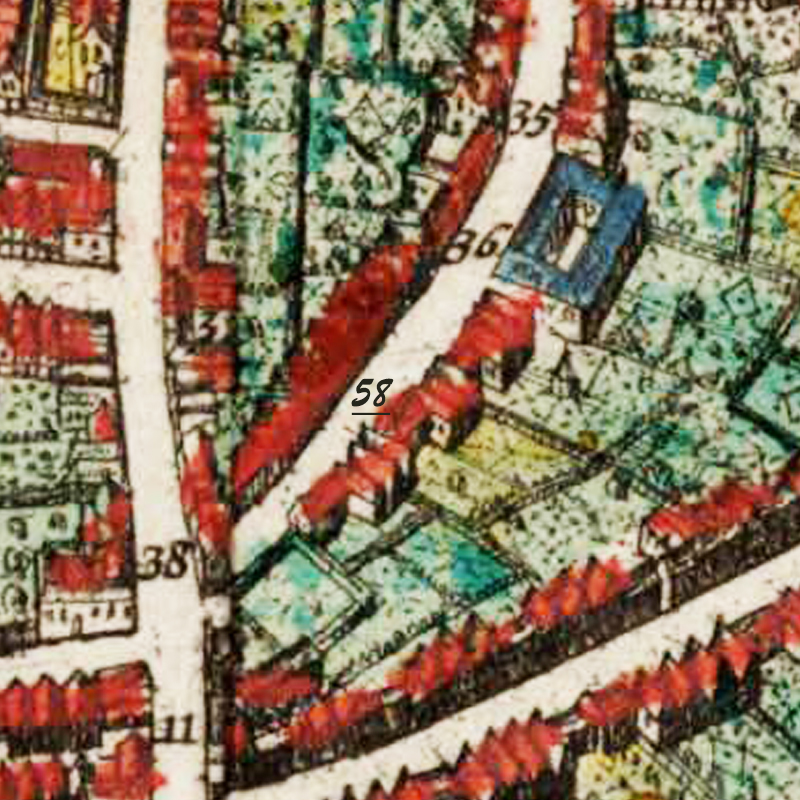 In the Middle Ages, one of Leuven’s noble families was the van Pynnocks. In the centre of Leuven, on what they then called the Muntstraat (today’s Sint-Michielsstraat), was a large mansion owned by the Pynnock family, called the Hof van Chièvres.

It was not known when the Hof van Chièvres was built. But we do know when it passed to Lodewijk III van Pynnock (1435- 1504), who was appointed Mayor of Leuven by Duke of Burgundy Philip the Good on 4 March 1461.

In the title of a deed dating from 9 January 1483 stated that Lord Lodewijk III van Pynnock inherited it from Lord Hendrik:

The Founding of the Jezuïetencollege

In 1583, the powerful Order of the Jesuits founded a college along the Sint-Michielsstraat. To do so, they purchased three houses on the street, among which was the Meiershuis ‘Hof van Chièvres’. The complex was huge: the Jezuïetencollege bordered the Pauscollege and it stretched all the way to the Naamsestraat. Their first chapel was built in 1601, was located on the side of the Naamsestraat. But in 1650, this was replaced by the current Baroque church – known today as the Sint-Michielskerk – designed by fellow Jesuit, Willem Hesius. The first stone of the monumental facade was laid by the Grave Ernest-Charles van Isenburg, dedicated to the Archduke of Brabant, Leopold-Willem. The interior was only completed towards the end of the 17th century.

Leuven’s Jesuit community became the intellectual centre of the Counter Reformation in Northwest Europe. This church produced influential Jesuits like the Italian Cardinal, Robertus Bellarminus (1542-1621), adviser to the Archduke Albrecht and Archduchess Isabella, Leonardus Lessius (1554-1623,as well as Cornelius a Lapide (1567-1637) – all teaching at the Leuven University.

The College for the Veterans

After the Jesuits were outlawed in 1773, the whole complex were repurposed. Their church became the new Sint-Michielskerk, as the original was falling apart. Their college, was turned into a hostel in 1778 for veteran students in theology, hence the name ‘Collegium Veteranorum‘.

Between the years from 1779 to 1815, the college also served as a theology seminary, a hospital, storage spaces and then the Chemistry Faculty of the newly-founded Rijksuniversiteit. With these very different functions, modifications were made to the space. Many walls were broken down and the gardens were cleared for new buildings.

The Maria-Theresia- en Veteranencollege was so named because it was the Habsburg Empress Maria Theresia herself who decided to turn the former Jezuïetencollege into a theological seminary in 1778. This is recorded in the stone plaque above the entrance of the Veteranencollege:

Today, in the 16th century cellar of the college, it still houses one of the closed stacks of her son and heir Emperor Joseph II. The KU Leuven library staff calls it the ‘Joseph II Cellar’.

It was Joseph II who ordered the extension of the building by adding the right wing in 1786-87 to house his General Seminary.

The street on which the Maria-Theresia- en Veteranencollege is located, is called the Sint-Michielsstraat, after the Sint-Michielskerk at the end of the street along the Naamsestraat. In fact, this street was much longer in the Middle Ages and was called by different names, when it connected from today’s Muntstraat.

Muntstraat: In the act from 9 January 1483 mentioned above, the street was specifically named as ‘Monetestrata‘ (Muntstraat). Already in 1297, this street was called so because of the mint located there.

’s-Meyersstraat: In reference to the Mayor’s House located further down the road, the Oude Muntstraat is fortunately baptised around 1523 as the “’s-Meyersstraat“, a name that it retained until today, albeit just the part adjoining the Muntstraat.

Jezuïetenstraat: The street was thus cut into two by the 16th century in terms of its name. The part where the Jesuits’ college is located is now called the ‘Jezuïetenstraat‘.

Rue Charlier: When the French occupied Leuven in 1795, they abolished all religious institutions and also renamed the streets. So the Jezuïetenstraat was now called the ‘Rue Charlier‘.

Sint-Michielsstraat: With the demolition of the Standonckcollege and the Pedagogie Het Varken and the establishment of the Hogeschoolplein square from 1807-1812, it was made even clearer the break between the Jezuïetenstraat and its lost arm of ’s-Meyersstraat. It was then that the street was baptised again to Sint-Michielsstraat.

With so many changes that took place, there is no trace of the former Meiershuis, the Hof van Chièvres.

When you enter the college, you can see the imposing eastern facade of the Sint-Michielskerk, a tell-tale sign that the church used to be closely connected to the college.