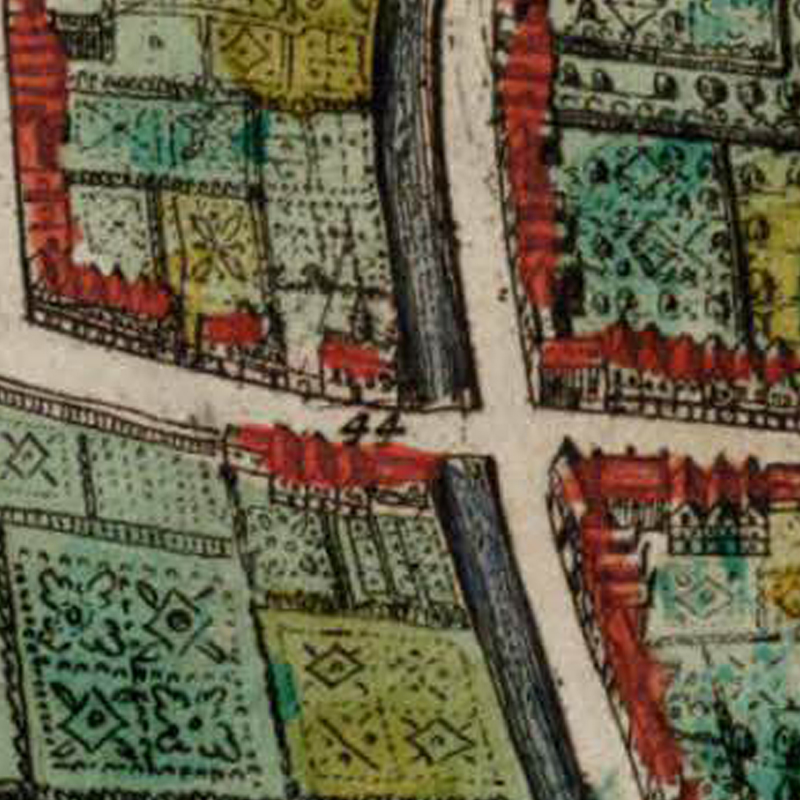 The Chapel of Crossbowmen

As early as 1340, along the River Voer and by a footpath leading to the city gate of Tervuursepoort, there was a chapel dedicated to the Holy Cross. Its name was ‘Chapelle van de Heilige Cruce‘.

In 1420, the chapel became the property of the Guild of the Crossbowmen of St George. St George is the patron saint of crossbowmen, and therefore, the group dedicated their chapel to him and renamed it ‘Sint-Jooris Capelle‘ (Sint-Joriskapel) – Chapel of St George.

Attached to the chapel was a convent of ‘repentant girls’, known as the ‘Susters van St-Jooris ten Heiligen Cruce‘ – Sisters of St George at the Holy Cross. According to the surviving statutes approved by the communal council in 1433, this community was administered by six directors, decided by the guild, half of which were its members and the other half from the membership of the Brotherhood of the Holy Cross. The sisters lived on alms which they begged for in the city everyday.

There was an agreement signed, on 16 February 1477, between the directors of the chapel and the pastor of the Church of St Jacob (Sint-Jakobskerk), Renier Vander Elst, where during the annual feast of St George, there would be a procession officiated by the pastor where one carried the portrait of the saint.

By the late 1780s, the 14th-century chapel was at a huge risk of crumbling down. Cardinal Jean-Henri de Frankenberg, Archbishop of Mechelen, authorised in 1786 the Guild of St George to tear down the building.

The only condition was to transfer all relics and donations to the Church of St Jacob.

The chapel was demolished the same year and it was recorded that the guild erected on the site private houses for use by gardeners.

On the site of the Sint-Joriskapel is now a 18th-century house known in the records as a ‘kosterswoning‘ – a sexton’s house. A sexton used to be an officer of the church, who is usually its bell-ringer and gravedigger.

This current-day house has been completely renovated, its form however is a remainder of the former sexton’s house of the chapel. After the chapel has been demolished in 1786, the sexton’s house was enlarged to become a revenue house “opbrengsthuis‘ which amounts to a house being divided into smaller rental units for the purpose of making rental profits.

It has been completely renovated in 1974 by D. Depoorter.

The River Runs Through

As was explained in the post about the Kruidtuin, the River Voer actually runs under the street called Kapucijnenvoer. When it was still an open river as you can see in the drawing recorded by Leuven historian Edouard van Even, the bridge in front of the Sint-Joriskapel was known as the Sint-Jorisbrug – St George’s Bridge.

On the Road to the Leper Colony

The outer city gate of Tervuursepoort used to be known as the Oude Brusselse Poort – Old Brussels Gate, because it used to be the the road to Brussels. To get there, you first have to pass through the leper colony in Terbank, after which the street was named when it turned from a mud path into a real street.

The Sexton’s House and other properties on the site of the Sint-Joriskapel and its convent are all private housing.