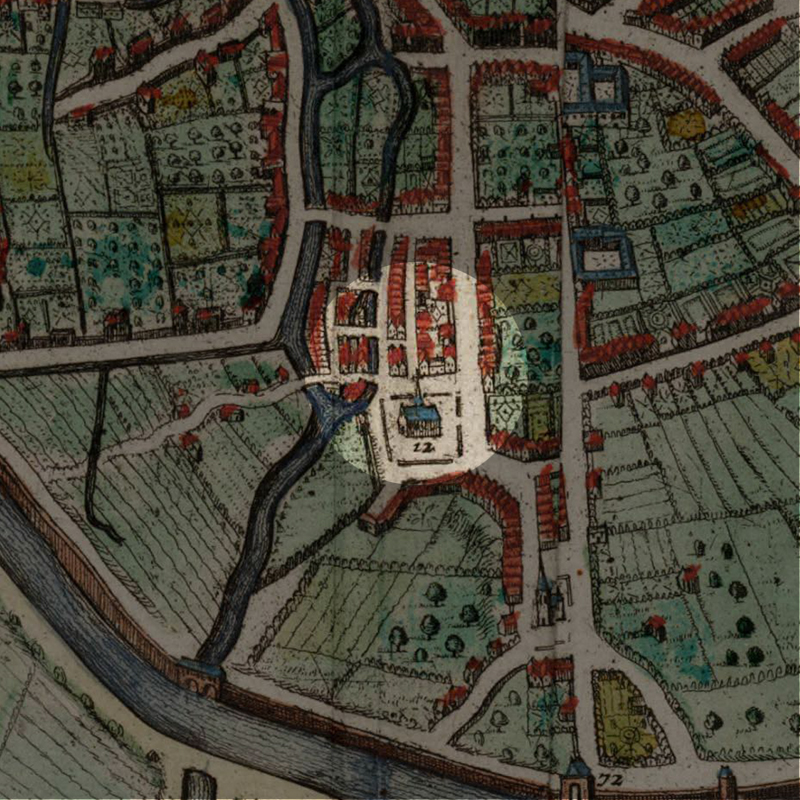 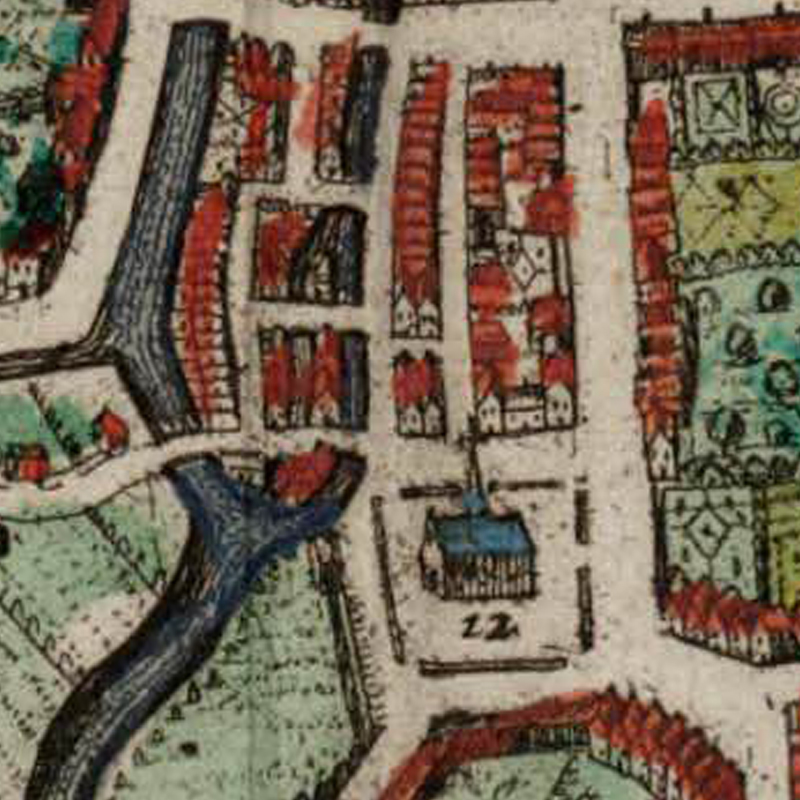 The Groot Begijnhof is the bigger of the two beguinages in Leuven. The oldest records date back to 1232, although the inscription on its church noted 1234 as the year of its founding. The community itself, was most likely older. Both Molanus and Justus Lipsius noted 1205 as the founding date. According to Edward van Even, the authorisation given by the Duke of Brabant for the founding of the “Reliosae de Hovis” dated to 1232 but the definitive organisation of the quarter only took place three years later.

Who were the beguines?

The movement of religious women living together in a community after renouncing penises and the human beings attached to them flourished in the Low Countries from the 12th century onwards. Many claim their foundress to be St Begga, who lived from 613 to 693. Upon the death of her husband Ansegisel – son of Arnulf, Bishop of Metz, she made a pilgrimage to Rome. Upon her return, she became a nun and founded seven churches and built a convent in Landenne-sur-Meuse where she lived her an abbess for the rest of her life.

Although an example to many of the beguines, St Begga most likely did not found the movement.

More likely is the movement founded by a man – a priest named Lambert le Bègue (Lambert the Stutterer). From Liège, he gathered large communities of followers, in refuges for the poor, including women who were unmarried or widowed. But the movement of beguines did not actually start until he died.

On 1 January 1270, Arnould de Gestel, Abbot of Villers, gave the following instructions to the priests and administrators of the community: The beguines could build “domus” (houses) and “camera” (rooms) within the “super aream curie” (establishment). The only right they have is to live there until their death. They cannot sell them or expect to come back to live there if they leave without authorisation. Should a beguine get the authorisation to leave for a while, she would have to return within a year and one day, otherwise she would lose the ownership of her property.

The Groot Begijnhof was divided into “foundations” named after saints.

The “large” foundations provided some food, fire and light and some monetary assistance. The “small” foundations provided only some money. Rich beguines lived in their own house, the poorer ones lived together in one, mostly twelve of them. Beguines were both young (often orphaned) girls, or widows. There were women from very rich families too, such as “vanden Calstre, vander Linden, Uiten-Lienghe, Pynnock, van Ryckel“.

During the day, the gates were open and beguines could enter and leave the compound. But by nightfall, they were expected to have returned to their homes.

In 1798, Leuven was invaded by the revolutionaries of the French Revolution from across the border. As with all religious institutions in Leuven, the Groot Begijnhof faced an unprecedented challenge to its survival.

According to Edward van Even, the Groot Begijnhof was sold off as a “national good” by Michel Robyns on 29 July, the “receiver of the domains”. This meant all the furniture and ornaments in the church. Fortunately, the larger pieces were purchased by allies, so that they were later restored after the French Fury. The ancient gates that were torn down had to be rebuilt in 1803.

Unfortunately, the Groot Begijnhof now came under the administration of the OCMW, the social services council in Leuven. With the decline of the movement in the 150 years that followed, the number of beguines slowly died out. The houses that were not occupied by the beguines were given to the poor. With little means, or care and respect for the historical value of the compound, the inhabitants rendered the houses in a dire state of disrepair by 1960. Unwilling to take responsibility for their mismanagement, the OCMW looked for a buyer. Initially a real estate developer expressed interest, which would have meant the loss of the entire site.

Luckily, the KU Leuven – Leuven’s university – bought the entire site over, with the intention of making it into dormitories for its students and lecturers. Restoration took place in two phases and was only completed by the 1980s.

The Battle of Leuven (Slag bij Leuven), sometimes known as the Battle by the Dijle (Slag bij de Dijle) happened on 1 September 891.

Maurading Vikings arrived earlier that year and completely overran the nearby Maastricht, with the aim of conquering Middle Francia, also known as Lotharingen. Leading the East Frankish army, Arnulf of Carinthia met them on the River Dijle, in “Loven“.

This was the first ever written account of Leuven.

In the “Annales Vedastini“, the chronicles written in the Abbey of Sint-Vaast that recorded the years 874 to 900 in Middle Francia and West Francia:

“The Northmen, who had spent the winter in Noyon, decided to stay in ‘Loven’ to build up their strength for the coming winter. They made their way there in the month of November… King Arnulf soon arrived with a united army to meet the Northmen, and God has protected them he has seized the army camp, where they have killed not few of the band of Northmen; And so, with this victory obtained in this manner he made his way back to his kingdom.”

The Anglo-Saxon Chronicle recorded the same battle without mentioning Leuven.

Up until today, Leuven inhabitants celebrate their victory over the Vikings each year, on the Monday after the first Sunday of September in the form of an animal market called the “Jaarmarkt“. While the highlight of the Jaarmarkt is the parade of farm animals, there are food and drinks stands and by the afternoon, the whole city would be in a state of drunken frenzy.

The area of Leuven where the Groot Begijnhof is located is called “Ten Hove“. It translates into “At the Court”. On the left bank of the Dijle, the area was known as “Aborg” – which came from “Aelteburch“, or “oude burcht” in Modern Standard Dutch translates into “Old Castle”.

It is without a doubt that this is the location of the first court of Leuven.

With the written accounts that the Battle of Leuven took place on the banks of the Dijle and by the small castle, many think the Groot Begijnhof was the spot where the Vikings were defeated.

But none of this can ever be verified, as the Groot Begijnhof cannot be excavated for archaeological digs.

Currently, “Aborg” is now called “Het Spaans Kwartier” (The Spanish Quarter). It is connected to the Ten Hove by a quaint wooden bridge, and is one of the most scenic spots of the Groot Begijnhof.

This area was the newest expansion of the Groot Begijnhof in the year 1636, built previously on the community’s orchard. Before it was called the “Het Spaans Kwartier“, it was actually called “Het Soldatenkwartier” – the soldiers’ quarters. Since 1830, washer women and wives of Belgian soldiers lived here, in the houses along the western and northern parts of the enclosure.

It is unknown why the name “Soldatenkwartier” later mutated into “Het Spaans Kwartier“.

The church of the Groot Begijnhof was called Sint-Jan de Doperkerk, after John the Baptist. Originally under the parish of St Quentin (Sint-Kwinten), it got its independence in 1250. It has been listed as a core zone of the site since the Begijnhof was listed as a UNESCO Heritage site in 1998.

Built in 1305, as attested on the exterior in the north portal, the current building was the first in Dutch-speaking Belgium to be studied and restored according to its original aspects from 1978-1985 by Robert Vandendael.

The exterior is a combination of 14th-century sand-lime stone and layers of 15th-century ironstone.

The white chalked interior dates from the 17th century.
But you can still find murals dating from the Middle Ages featuring female saints:

There are about 90 gravestones of beguines between the period of 1396-1753 in the floor. Most notably are the two of Katherine van Voirsellaer (†1443) and Katherine Van Nethene (†1459) that were placed in the northern aisle wall in 1856.

The Convent van Chièvres (Convent of Chievres) is one of the largest buildings in the compound. Founded in 1561, it was named after its founder Maria van Hamal, widow of the Lord of Chièvres, Willem II van Croÿ. Note the sphire-like peak at the top of the roof. It is reminiscent of the corner towers of the Kasteel van Heverlee (Castle of Heverlee) – built by Willem II van Croÿ, which today is the Kasteel van Arenberg (Castle of Arenberg) also owned by the KU Leuven university.

In front of the Convent van Chièvres is a square where you can see an intricately carved water pump with two lion heads.

The fact that Groot Begijnhof was able to survive the OCMW and the ruthless Brusselisation in Belgium from after the war until the eighties, is due to the purchase by Leuven’s university KU Leuven. After two phases of restoration and renovation works, the university turned it into dormitories for students and lecturers in the 1980s.

This is one of the most scenic and romantic spots in Leuven, and the largest and best-preserved beguinage in the Low Countries. Till now, it is also one of Leuven’s best-kept secrets. The best times to visit Het Groot Begijnhof is in spring when all the trees are in bloom and in winter under a thick carpet of snow.