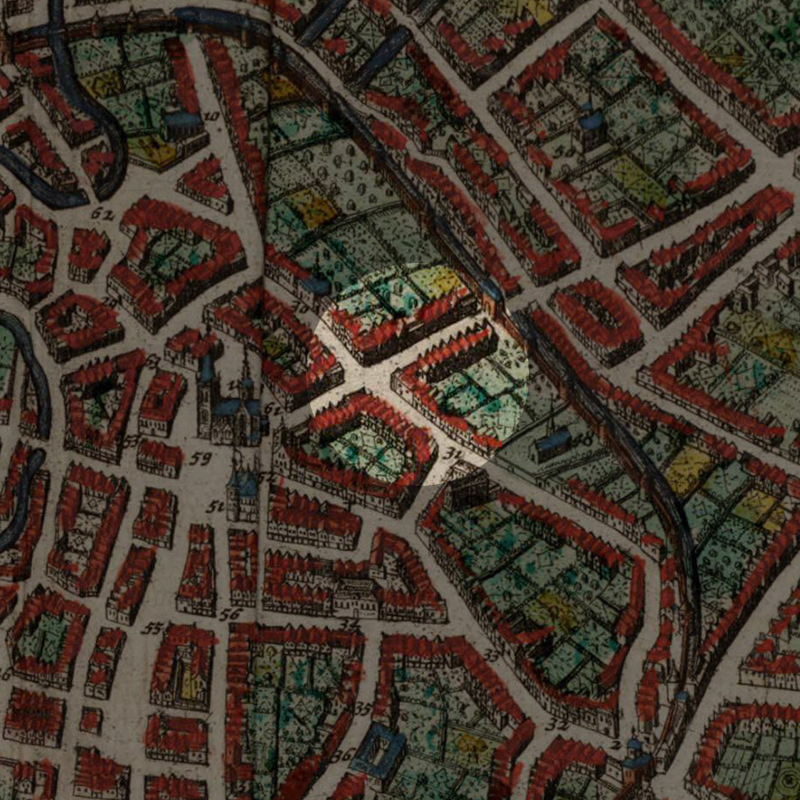 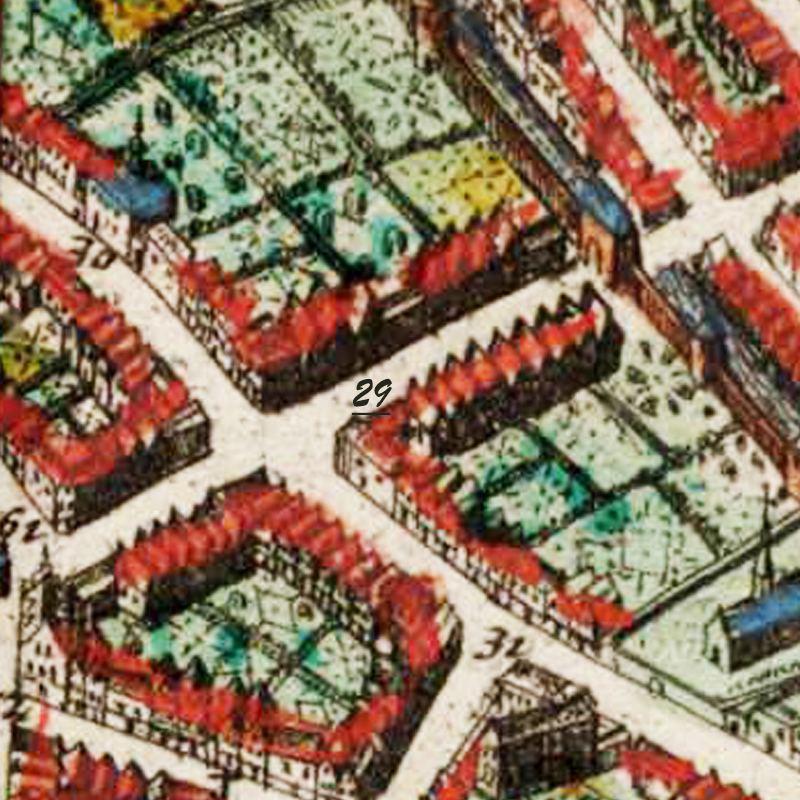 The First College van Mechelen on the Oude Markt

In his will dated 13 December 1500, Arnold Trot, registrar of the Faculty of Theology at the University of Leuven and chaplain of the Sint-Pieterskerk left a sum of money for 7 scholarships. The scholarships were meant to benefit boys of his friends and family from the cities of Mechelen and Muizen.

The administrators of his will – Adriaan van Utrecht, Jan Calenteyn and Pieter van der Beken – went ahead to set up the Collegium Mechliniense, or “Collegie van Mechelen” in 1501 in a building located on today’s Oude Markt.

It was also called the Trotcollege.

Trot made sure that the recipients of his scholarship were not rich, but they shouldn’t be poor either:

“Non divites, non mendicantes, sed tales quorum parentes non sufficiunt filios enutrire per omnia in scolis” (Not rich, not beggars, but boys whose parents having trouble bearing all the costs by themselves)

Emboldened by his victory at Den Briel in 1572, William of Orange started marching south. Leuven’s city and university drew up a new tax on beer, wine and real estate called “gemeyne middelen” to build up the city’s defense. But on 3 September 1572, Orange’s forces marched into the city. The people of Leuven realised that it was impossible to defend the city, and they paid the ransom of 16,000 florins to avoid being plundered. But since the war has arrived at the doorstep of Leuven, many students fled the city. With the students gone, the income of the professors and the college administrations dropped. After 1578, there was almost no students left in Leuven.

Wih the students gone, the college buildings were occupied by the troops, who destroyed many of them. It was clear that by 1578, the Trotcollege never recovered from it.

According to the archives, a certain Christophe van Crieckenbeke, pastor of the Sint-Janskerk (Church of St John) in Mechelen in his will of 30 August 1578 changed his scholarship donation from Trotcollege to the College de Valk, following the “dissolution and loss” of the former.

According to Edward van Even, there is nothing left in history from 1578  of what happened to the property of the Trotcollege on the Oude Markt. It clearly did not survive the Spanish Fury.

At the request of another Mechlin, Father Claude Verrydt, Priest of the Sint-Walburgakerk in Oudenaarde, the Magistrate of Mechelen opened up the second College van Mechelen in Leuven in 1615.

In his ‘Louvain dans le passé et dans le présent‘ (1895), Van Even marked the precise location of this College van Mechelen on the Diestsestraat:

This spot is marked by Nummers 26 and 28 on the Diestsestraat.

Compared to the first College van Mechelen, this new college has considerably reduced in size.

In 1675, it was ‘restored to a more suitable footing’ when the city council of Mechelen re-established the college as the “Collegium Provinciae Mechliniensis“. It was also named after the city’s patron saint, Rumbold of Mechelen: “Sint-Romboutscollege“.

In an act dated 13 April 1616, ten bursaries were established by Father Claude Verrydt, Priest of Oudenaarde, for students from Mechelen, Ronse and Oudenaarde.

To sell or not to sell

In the documents from 7 March 1695, an agreement was made between the City of Mechelen and ‘het college gevestigd in een huis van de Dorpsstraat te Leuven‘ (the college located in a house on the Dorpsstraat in Leuven). Here we are reminded that the section of Diestsestraat from the Sint-Pieterskerk and Hooimarkt to the first city wall used to be known as the ‘Oppendorpstraete‘. Exactly what the agreement was, I have not been able to find out. But it most likely concerned money.

Was the College van Mechelen in financial troubles? In any case, it did not survive the French invasion twenty years later.

With the abolition of the university in 1797 by the French, the College van Mechelen was sold to a certain Pierlet, who turned it into a theatre, from 1798 to 1803. After this period, the building was converted into private housing.

Nothing is known about the appearance of this college.

You may have noticed that Number 28 is situated a few metres backwards compared to the facades of the other buildings. This is because the street has been straightened or its alignment has been corrected so the new facades could follow the new side edges of the street.

Leuven was severely bombed in the First World War and just a little less in the Second. Many houses needed to be rebuilt, but those that survived still followed the old street lines. What people did, was to built a new ground floor facade aligned with the other houses and then place a balcony above it.

Medieval streets did not usually have a consistent width and they were formed quite organically according to the terrain. Diestsestraat was a major artery of Leuven, which was the capital of the Duchy of Brabant, so it was not a small street through which carriages could not pass through. But with the rise of personal vehicles after the two wars, many medieval streets had to be re-calibrated to cater to the traffic.

The way Leuven has dealt with this situation, combined with the large-scale damages and reconstructions due to the two World Wars, is certainly quite special. Thus the old facade with a new single-floor facade topped with a balcony is a uniquely Leuven architectural feature.