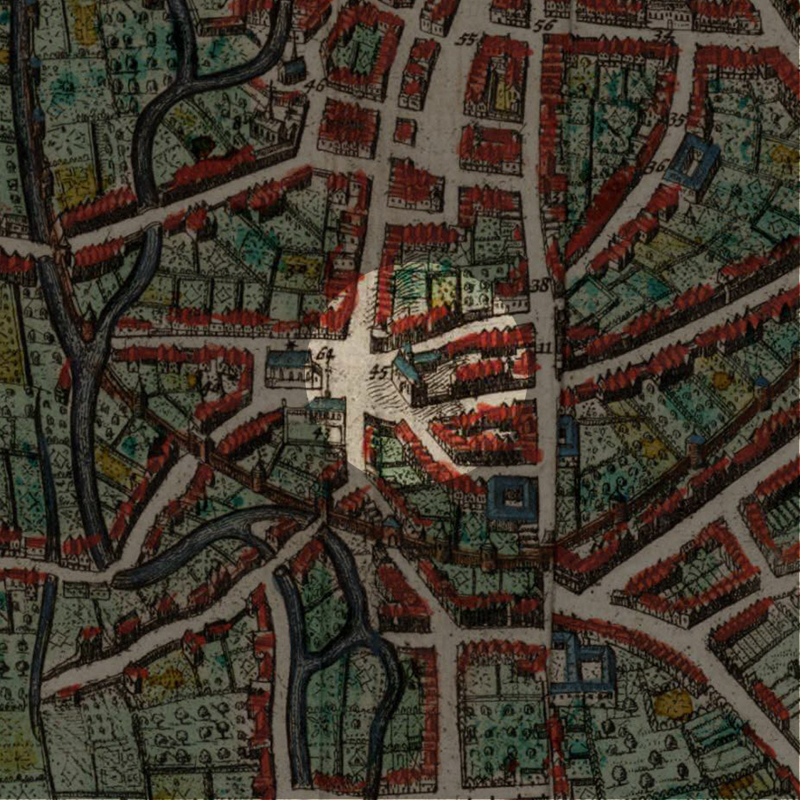 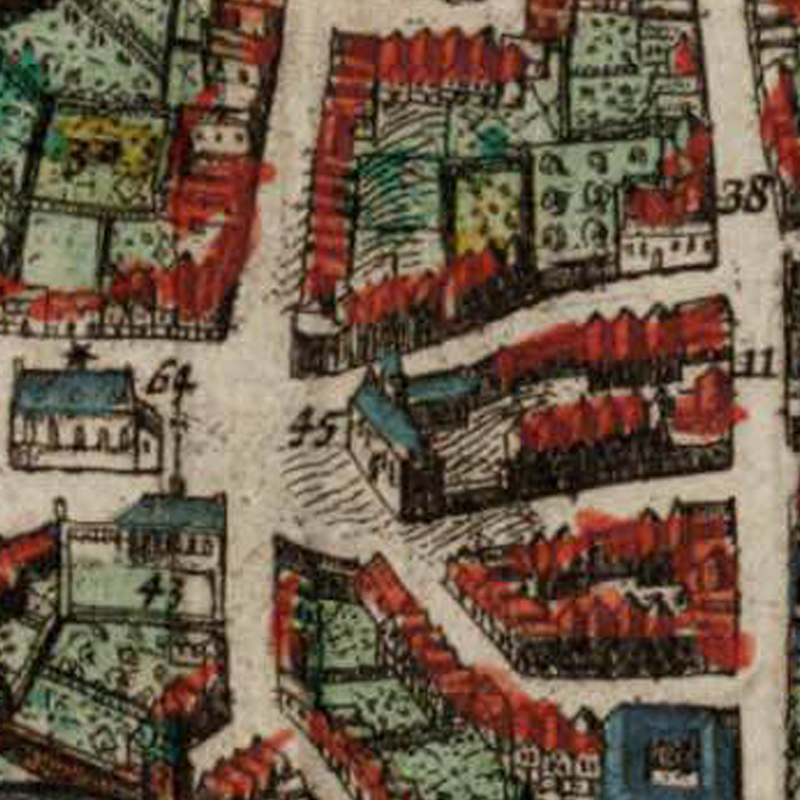 Devotion to the Virgin Mary

In 1299, the devotees from the Sint-Pieterskerk built a chapel at the foot of the Ramberg, dedicated to the worship of the Holy Virgin Mary. These devotees were students and their teachers from the church’s ‘grammar school’ which taught Latin, and they called their new chapel ‘Mariakapel‘ – Chapel of Mary, while the chapel became known as ‘Capella Clericorum‘ and in the common tongue, ‘kapel van de clerici‘ or ‘Clerckencapelle‘ – Chapel of the Clerks.

The owner of the chapel was the city of Leuven.

Devotion to St Anthony the Great of Egypt

With the founding of the Leuven University in 1425, the Latin school of Sint-Pieterskerk disappeared. The University took over the ownership of the chapel and passed it to the Arts Faculty in 1429.

The Black Death in the 14th century led to the veneration of St Anthony the Great, also known as Anthony the Hermit and Anthony of Egypt, the patron saint against the plague. Not to be confused with St Anthony of Padua, patron of the Irish College opposite the chapel.

It was around this time that the Mariakapel changed its devotion entirely to the worship of St Anthony the Great.

Records show that in 1490 the administrators of the chapel placed an order with the Brussels sculptor Hendrik van Everghem to build an altar for the saint. In 1501, the local bellmaker Van den Gheyn made a bell with the name ‘Anthonius’ for the chapel. From 1539, there was a yearly procession for the hermit saint.

The money that came in from this redirection of worship was so enormous, that the chapel bought a few more properties for charity and set up two foundations to manage them.

This made the chapel the most important chapel in Leuven.

In the locals’ tongue, the Mariakapel now became known as the ‘Sint-Antoniuskapel‘, a name which it has kept until today.

The wealth generated by the fear of the plague has permitted the chapel several structural upgrades in the centuries that followed. Its first major renovation took place in 1617, then again in 1665, 1754 and in 1778-1780.

But its glory soon came to an end with the troublesome times. By the War of the Austrian Succession in 1740-1748, the chapel had to convert the transept arms into two houses for rent. The Austrian army even briefly occupied the chapel itself. Then came the French invasion in 1797, when the occupiers shut down the chapel together with the whole university, and took over the administration of the charities run by the chapel.

The building was put up for sale in 1860 and before that, it was rented out as shops, and occasionally for worship by Protestants.

In 1840, some friars from the ‘Congregation of the Sacred Hearts of Jesus and Mary‘, also known as the ‘Picpus Fathers‘ after the named of the street their headquarters are located in Paris, set up shop in Leuven after having bought some properties behind the Sint-Antoniuskapel.

With this property, the Picpus priests set up the ‘Genootschap van de Altijddurende Verering van Sint-Jozef‘ – the Community of the Forever Veneration of St Joseph – in 1860.

In the same year, they also bought the Sint-Antoniuskapel which was put up for sale.

The Picpus converted the chapel back into its original function and renovated the building in Neo-Gothic style. The work took until 1868 to be completed.

With the new chapel in place, the Picpus called upon the nation to come worship St Joseph, and made the Sint-Antoniuskapel into a national site for the worship of the protector saint of the church.

They renamed the chapel: ‘Heiligdom van Sint-Jozef’ – the Holyness of St Joseph.

This worked. Thousands arrived to Leuven to pray in the Sint-Antoniuskapel, not just from all over the country, but also from other parts of Europe. From 1901 onwards, processional pilgrimages were organised for these visitors, not just during the month of March which is the month of the saint, but also throughout the year.

After the First World War, the worship of St Joseph took a dramatic turn.

The remains of the Belgian missionary – Pater Damiaan – or Father Damien in English, were brought to the Sint-Antoniuskapel in 1936. Pater Damiaan was later canonised for his work from 1873 to his death in 1889 in Hawaii where he cared for a settlement of people with leprosy.

Now known as ‘Saint Damien of Molokai‘, Pater Damiaan was born ‘Jozef De Veuster’. Another Joseph now to be worshipped in the Sint-Antoniuskapel.

The crypt where his remains were placed brought scores of pilgrims from all over the world. In order to accommodate the scores of visitors, the Picpus priests renovated the chapel in 1960-1961. The front and side facades were protected. This is the look of the chapel you see today.

With the worship of Pater Damiaan taking over in the Sint-Antoniuskapel, the Picpus fathers renovated their property further up the hill which they bought earlier. Here, they transformed it into a ‘Devotiehof van Sint-Jozef’ – Devotional Garden to St Joseph.

The garden contains 7 stations for pilgrims. Located at Number 11 Sint-Antoniusberg, above the main entrance, it is written: Ite ad Joseph(um), meaning ‘Go to Joseph’.

The Sint-Antoniusberg and the Ramberg

There are two streets that run from the upper city to the lower city where they meet at the Sint-Antoniuskapel.

On the right of the Sint-Antoniuskapel, is the ‘Ramberg‘. The hill itself and this street is known by this name, which in fact does not refer to any ‘ram’ but is a bastardisation of the name ‘Raamberg‘ or ‘Window Hill’. The original name in the 14th-15th centuries was “Raemstreetken” and “Raembergh“, referring to the weavers who used to live here, who were drying the dyed cloth across the multitude of windows.

This street was an old one situated within the first and inner city walls, and was originally filled with small houses. By the 19th century, the medieval houses have all but disappeared.

The Sint-Antoniuskapel is located on the square called Pater Damiaanplein, opposite the Irish College and the Hollandscollege.

This square was in the 13th century known as the ‘Lagere Plaats‘ or ‘Lower Square’. This is because the city was divided into upper and lower town and the square was the place of gathering for people in the lower town.

According to Leuven historian Edward van Even, there used to be a wooden grain hall standing here. And in 1293, the Duke of Brabant Jan I gave the square to the city, on the condition that it would never be built on. This condition still stands today.

Because of this condition, the square was also known as the ‘Ledige Plaats‘ or ‘Empty Square’. And the street leading to it known today as Parijsstraat, was called the ‘Ledigstraat‘ or ‘Empty Street’.

By then, the square was known as ‘Varkensmarkt‘ to the locals, because of the pig market here. This continued until 1813 when it moved to the new Sint-Jacobsplein outside the Sint-Jacobskerk.

Thereafter, people started selling chickens and pots here instead, so the local name for the square became known both as the ‘Kiekenmarkt‘ and the ‘Pottekensmarkt‘. Other sources called it the ‘Sint-Antoniusplaats‘ after the chapel.

With the installation of the Pater Damiaan mausoleum in the Sint-Antoniuskapel in 1936, the square was renamed Pater Damiaanplein in the same year.

The Sint-Antoniuskapel is not as busy a pilgrimage site as it was in the 20h century. It is, if anything, a quiet place of contemplation and of prayer. As remarkable as it is, the history of the place as a site for human hope and devotion shows human communities are stronger when we truly care for one another.