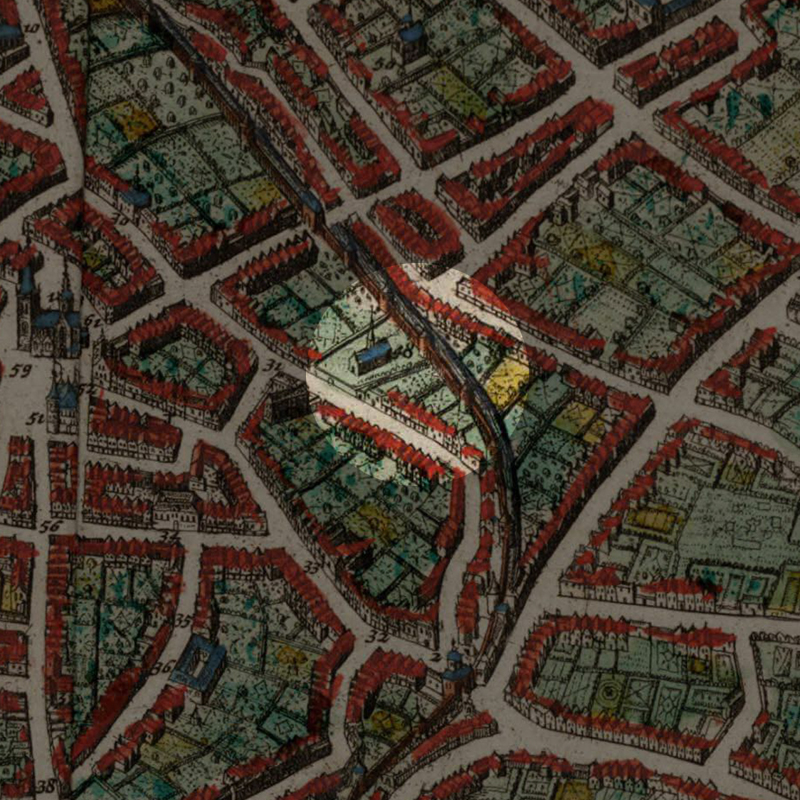 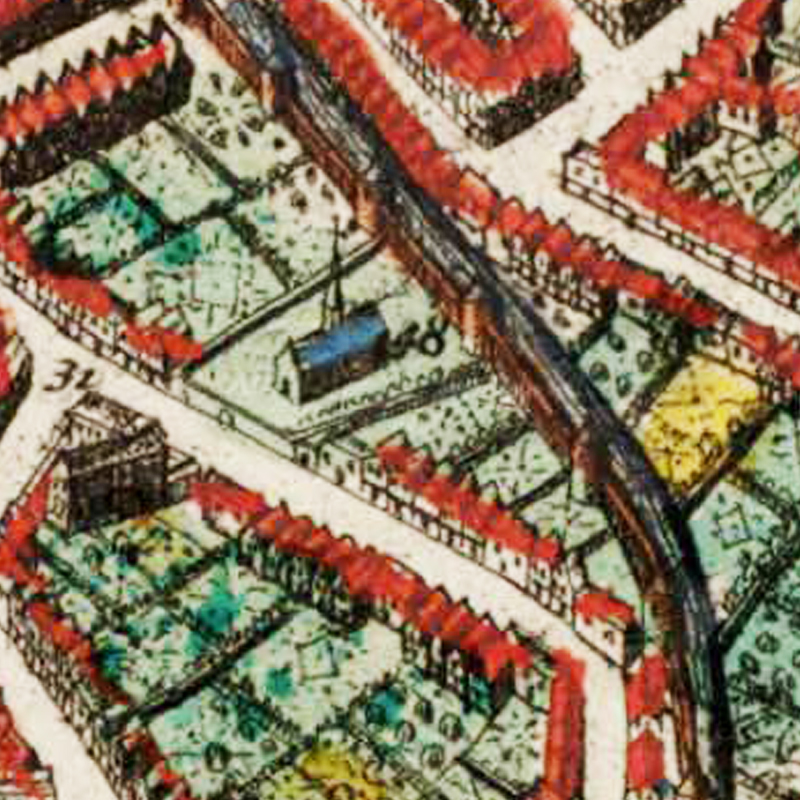 Back in 1513, Catharina van Oppendorp, the widow of the knight Jan van Bulloys, received the permission from Pope Julius II to develop her mansion into a convent. She chose the Order of the Poor Claires, founded in the 13th century. Following the strict Franciscan ideal of poverty, the Poor Claires were originally really poor. But a less strict branch, that follows Pope Urban IV’s decree that allowed for the ownership of property, was formed and was ironically labelled in Dutch as “De Rijke Claren” – the “Rich Claires”.

The kind widow Catharina was herself rather rich. She owned a mansion on a sandy slope right in the middle of the city, just inside the first city walls, close to the Sint-Michielskerk. Leading to her property was a Nieuwstraat (New Street) – today’s Vanderkelenstraat. To complete her convent, widow Catharina eventually bought a few adjacent houses to complete the complex.

Records show that in 1597 and 1613, there were some extensive building, including a Gothic church with three altars in Renaissance style. The convent complex did not contain only cells for the sisters, but also a guesthouse, a brewery, a storage area, a hospice for the sick, as well as a huge garden in the centre.

Only ladies from good families were allowed to join the “Rich Claires” of Leuven.

In 1783, Emperor Joseph II abolished the convent. Soldiers used the vacated buildings as their barracks, including a bakery. In 1786, Architect Louis Montoyer bought the complex for 2050 florins, and knocked everything down, including a portion of the old city walls. Once flattened, the Emperor decided that the Leuven should buy the land back from Montoyer, at 1000 florins. Before the city could carry out its plan to turn the square into a wood market, the French invaded.

The French named the square Place Napoléon. Once the French were driven out, it received the official name of Volksplaats – “People’s Square”.

After the Great War, the square was renamed Monseigneur Ladeuzeplein, after the war-hero University Rector Paulin Ladeuze (1870-1940).

By the time the Clarissenklooster was flattened, the name stuck to the minds of the people and there were now two squares in the area. The square of the klooster itself was called “Jeirkerlisse“, in the Leuven dialect, which means “Earthern Clarisse“. This referred to the square without any cobbles.
The adjacent current-day Herbert Hooverplein was cobbled, so it was “Stiënkerlisse“, which means “Stone Clarisse“.

Today, when you stand on the Ladeuzeplein, you will not miss its crowning glory, the “Universiteitsbibliotheek” – University Library.

After the German invaders burnt down the 17th century library on the Naamsestraat in August 1914, the Americans gifted this neo-Renaissance building to Leuven in 1921. It was a monumental gift that could not replace the loss of irreplaceable cultural and historical treasures of the library.

The carillon originally had 48 bells, each representing the number of states in the US at that time. The main bell is known as the Liberty bell of Leuven.

But in May 1940, the Germans once again invaded Leuven. Once again, they destroyed the newly built library. With no hesitation, the building was reconstructed exactly as according to the original drawings. With an extensive renovation recently from 1999 to 2003, the Universiteitsbibliotheek was restored to its former glory.

In the centre of the Ladeuzeplein, stands a giant beetle pierced by a giant needle. This was a sculpture by the renowned sculptor Jan Fabre, on the occasion of the 575th anniversary of the university of Leuven, in 2005.

The Ladeuzeplein is now the square for the city’s weekly Friday market, the Christmas market, as well as all major student events.

As you walk across the square, do not forget to look at the slopes which can still be seen of the original hilly terrain owned by widow Catharina in 1513 when she was building her Clarissenklooster.