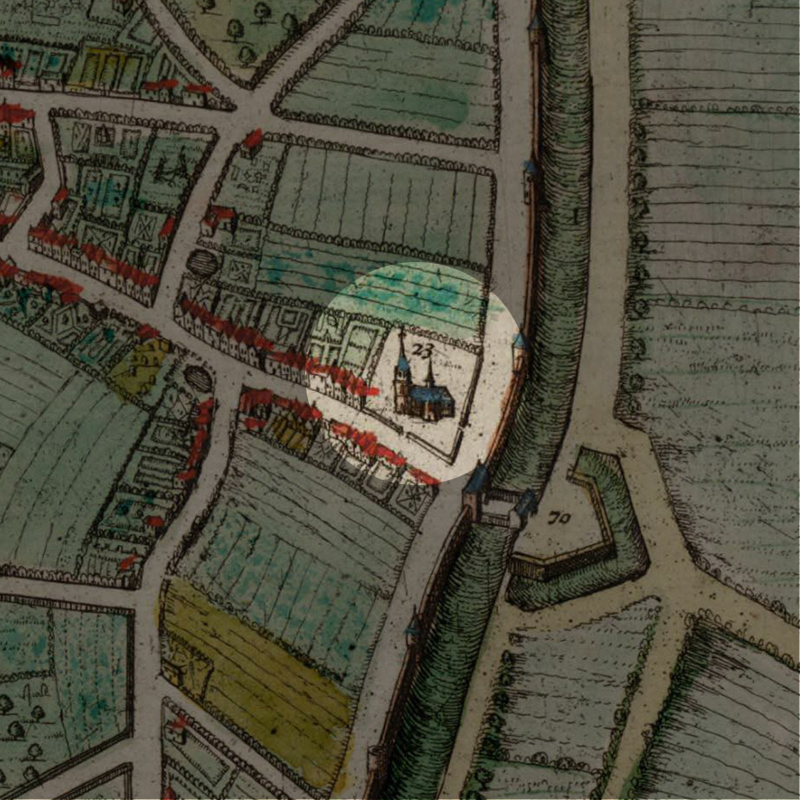 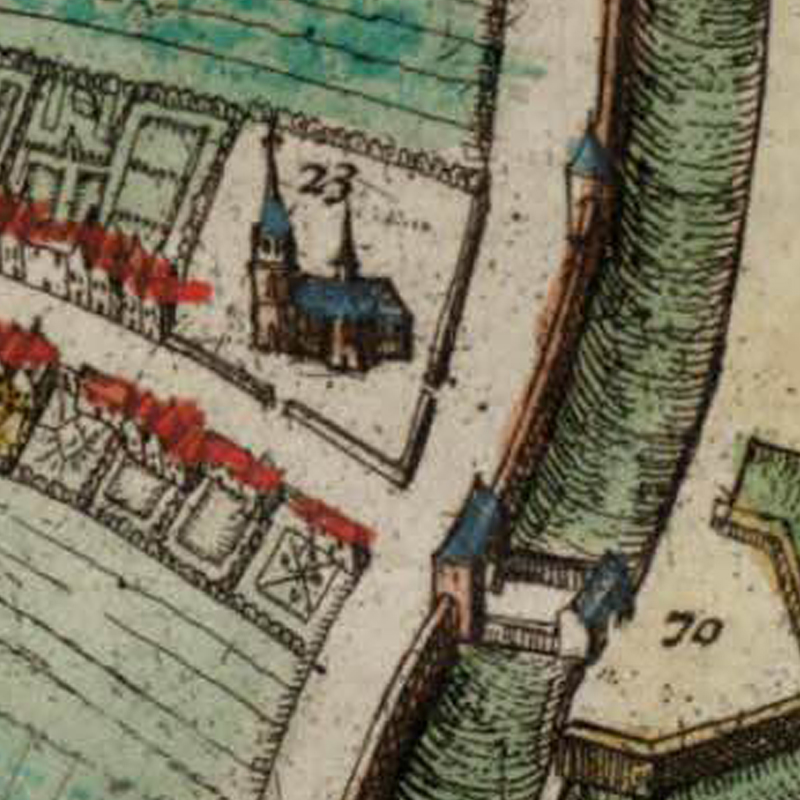 When one stands today with his back to the Tienspoort ring road in Leuven, one would not have the slightest idea, that here, one of the most artistically important in Western art history once stood. Today, what is left of the Kapel van Onze-Lieve-Vrouw-ginder-buiten is just small carpark and a few stores and houses.

In 1364, the Guild of the Crossbowmen of Leuven set up their residence chapel here, outside the (first) 12th century city wall some distance away from the Sint-Michielspoort (Gate of Saint Michael).

Located along the Hollestraat, or “Hoelstraat”, they gave their chapel a truly unremarkable name – Onze-Lieve-Vrouw-ginder-buiten – quite literally “Our Lady There Outside“.

Luckily for the crossbowmen, the second city walls were being built and the new city gate leading to the city of Tienen, hence “Tiensepoort“, firmly encloses the chapel inside the city’s boundaries. The Hollestraat is now renamed “Tiensestraat“.

So why did the crossbowmen need their own chapel?

Back in the Middle Ages, men liked to join men-only clubs and do men-only activities as an excuse to stay away from their wives. Much like today. The new chapel was like a new clubhouse, where new crossbowmen swore allegiance to the guild. It was an allegiance for life. After their death, members gifted their armour and crossbow to the chapel. As a result, the chapel started amassing wealth and had glass windows, silverware, paintings and other fancy ornaments.

Luckily for the guild, more and more men joined and amongst them, members of the Brabant nobility. Noblemen from the States of Brabant (the three states within the Court of the Duke of Brabant), formed a knightly society of the “Confrerie van Onze-Lieve-Vrouw-van-Smarten” and made the Onze-Lieve-Vrouw-ginder-buiten their house chapel.

Under the Spanish Habsburg rule, a lottery was organised in Brussels in 1552, in which noble families from all over the Low Countries took part. The profits made from the lottery went to paying for more costly liturgical ornaments for the chapel.

Little known to the world today, the Onze-Lieve-Vrouw-ginder-buiten of Leuven was home to two remarkable artistic treasures.

“The Descent from the Cross” by Rogier van der Weyden

The Kruisafneming (The Descent from the Cross), was the most copied work of the whole School of Flemish Primitives and was a revolutionary milestone in western European art history.

Painted in 1435 by the little known Tournai painter, Rogier van der Weyden/Rogelet de le Pasture, “The Descent from the Cross” was commissioned specially for the Guild.

As a complete break from other depictions of the familiar scene, Christ’s lifeless body formed a crossbow as a tribute to the Guild. It was a stroke of genius.

Another was the Mary’s swoon, which was described by theologians as “spasimo“. The fact that Virgin Mary’s pose mimics that of Christ is a direct reflection of the mystical devotion. For the first time, “The Descent from the Cross” became a scene that invites the viewer to partake in the sorrow and suffering of Christ and Mary.

In addition, Rogier van der Weyden painted tears on the faces of the actors in the scene. Each tear, shines like a pearl, born of the strongest emotion.

The whole scene was the most dramatic anyone had seen in the 15th century.

The fame of this wondrous painting behind the main altar of Onze-Lieve-Vrouw-ginder-buiten of Leuven soon traveled “there outside”. So much that the Crown Prince of the Spanish Habsburg Empire set his eyes on it in 1548. What Philip II wants, Philip II gets. His aunt, Mary of Austria and Hungary, sister of the Holy Roman Emperor, Charles V, was Governor General of the Netherlands. She came to Leuven to negotiate with the Guild to make them hand over “The Descent from the Cross”. In return, Michiel Coxie was commissioned to make a copy for the chapel and Mary, bought them a new organ and paid an additional 500 florins. She first kept it in her castle in Binche, and then sent it by ship from Antwerp to Spain. After acquiring the painting from his aunt, Philip II first placed the painting in his hunting lodge “El Pardo”, and then he placed it in the monastery palace, San Lorenzo de El Escorial by 1574. After the brief sojourn in Geneva in 1939 during the Spanish civil war, the painting was returned to the Prado museum, where it has remained ever since.

Since then, the scene created by Rogier van der Weyden in “The Descent from the Cross” was copied repeatedly throughout western art history, either the form, the sentiments or both.

It was undoubtedly one of the most important and most influential artworks in the history of western European art, from a small chapel with a nondescript name in Leuven.

A “retabel” is a decorative screen placed on or above the altar as a background. A “reredos” is the same thing but placed on the floor behind the altar. Often a full-scale painting or an intricately carved woodwork, a “retabel” or a “reredos” was only displayed during major occasions.

In the 15th and 16th century, Brabant wood-carved bas-relief retabels were famous not just in the neighbouring County of Flanders, but also throughout Western and Central Europe. These retabels were often gilded in gold or painted in full colour. Master sculptors from the Brabant cities of Brussels, Mechelen and Antwerp were widely courted for their work.

Among these was Jan Borreman. Described as the “best wood sculptor” of Brussels, Jan Borreman’s works were exported throughout the north of the Holy Roman Empire and in Scandinavia.

In 1493, Jan Borreman received and made a large retabel dedicated to St. George (“Sint Joris” in Dutch) by the Greater Guild of Crossbowmen of Leuven. It became his most famous work. Now known as the “Sint-Jorisretabel“, the retabel features the life, persecution and martyrdom of the military saint.

What made the Sint-Jorisretabel remarkable, were the details paid to every single figure.

The costume, hair and beards were all intricately carved. There was a huge sense of movement, through the various poses, accentuated by the draperies and clothes. The facial expressions are likewise very visual: the “bad” Emperior Diocletianus was distinctively mean-looking while the “good” St George was handsome and heroic.

For the viewers, it was as revolutionary as watching a 3D movie for the first time, especially when most retabels until then were flat and static. The realism was unprecedented.

In the Chapel of Onze-Lieve-Vrouw-ginder-buiten, the Sint-Jorisretabel was placed on the right side of the building and was meant to be “read” from right to left. It was most likely shown during festivities, when Guild members had to slowly make their way from the right to the altar.

We know for sure the work was done by Jan Borreman as he probably liked this work so much, that carved his own name IAN on the sheath of a sword.

Like many abbeys and churches in Leuven, the French invaders torn down this Leuven gem in 1798.

While it was a gross injustice, “The Descent from the Cross” was saved from this destruction and is now stored in the Prado Museum in Madrid. The rest of the art treasures of the Onze-Lieve-Vrouw-ginder-buiten were lost forever.

Fortunately, the Sint-Jorisretabel was recovered and was displayed in the Royal Museum of Art and History in Brussels. Yet it was always understood, that the display was a loan by Leuven to Brussels, not a gift. When the new Museum M in Leuven was founded in 2008, the city asked for it back. To no avail.

Perhaps other treasures looted by the French from the Onze-Lieve-Vrouw-ginder-buiten will resurface one day.

For now, we need to safeguard the memory, that for five hundred years, the small chapel of “Our Lady There Outside” in Leuven by the busy junction of Tiensepoort, was the spot that changed western European art forever.