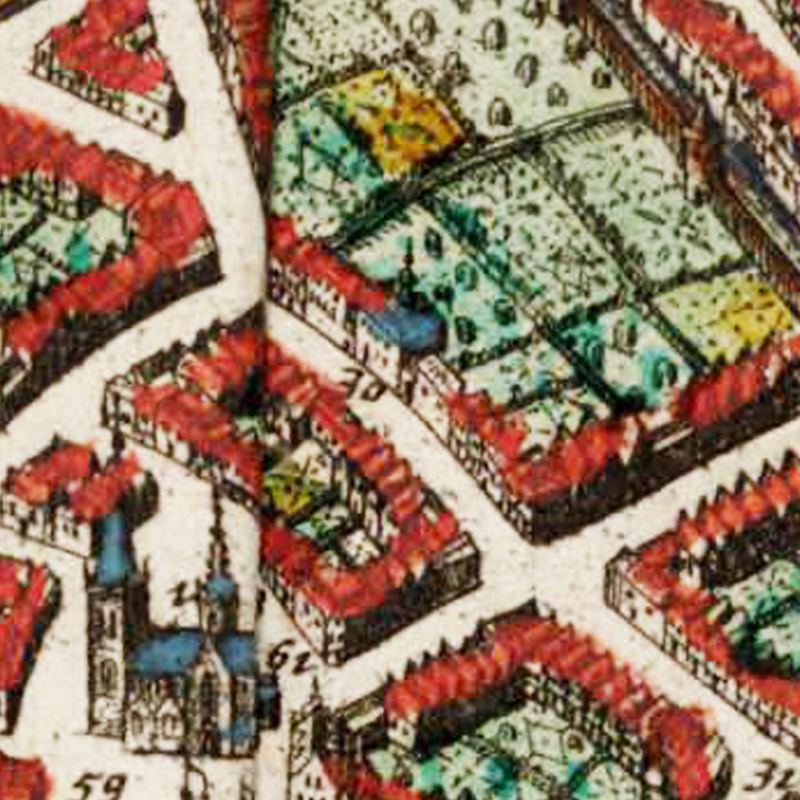 15th-century refugehouse of the Villers friars in Leuven

Since the end of the 13th century, the powerful Abbey of Villers possessed a number of properties in Leuven, in the neighourhood of the Koestraat (modern-day Vaartstraat). Under Abbot Francon Calaber (abbot from 1459-1487), the Villers friars built a huge refuge house to house its friars who came to study in Leuven, since the founding of the university in 1425.

This refugehouse hosted a number of its successive abbots, such as Gerard van Rotselaar alias van Leuven (abbot from 1433-1446) en Jean Regnault (abbot from 1503-1524).

This building underwent a renovation in the 17th century under Abbot Henri Van der Heyden (abbot from 1620-1647), as there was a plaque dedicated to him in 1637, in the northern wing of the current building above a water pump (see photo).

1660: The Formal Founding of the Villerscollege

In 1660, the ‘Collegium Villariense’ was formally founded by Abbot Bernard Van der Hecken (abbot from 1653-1666). Its first president was Servatius Gillet, a former novice master in the abbey.

Together with the Aulnecollege, the Villerscollege was formally incorporated into the Leuven University in 1662.

The surviving buildings of the Villerscollege you see today dates from the rebuilding that took place in 1757-1764.

Today, on the front facade right at the top, you can read the insignia written with a banner the motto of the Villers Abbey:

After the abolition of the university by the French Occupiers in 1797, the Villerscollege fell into private hands. The compound was divided into private housing despite not being suited for the purpose. Fortunately, it survived a fire in 1824.

Then in 1889, after changing hands a few times, the Villerscollege fell into the hands of the newly founded Leuven University. The new owner named it ‘Carnoy Institute‘, after the renowned Professor Jean-Baptiste Carnoy who specialised in cell biology. The name of the institute now dons the front entrance. The institute operated until 1982 after which the building was passed into the hands of the Belgian Federal Government.

The Mistake of the Cartographer: ‘College Verdonck’

There was no College Verdonck in Leuven, neither in 1649 when this map was published nor in the centuries that followed.

19th-century Leuven historian Edward van Even, when he redid this 1649 map in his “Louvain dans le passé et dans le présent” published in 1895, proposed that this should have been the College van Craenendonck.

Below are the reasons why I disagree with this theory:

1. In my Google Earth overlay (see my methodology in main page), this exact location marks the Villerscollege.

On top of that, on the map itself, you can see this spot was along the same street as the College van Savoye, clearly indicating the college concerned – ‘verdoncq‘ – was located on the Vaartstraat.

The College van Craenendonck was not a big college to begin with. It also moved 3 times during its existence in Leuven. Before its dissolution, it only moved to current-day Lei/Craenendonck in 1761. In 1649 when the map was published, the College van Craenendonck occupied the cornerhouse between Jodenstraat/Schrijnwerkersstraat from 1598 onwards. And before that, it was in a house on the then ‘s Meiersstraat, today’s Sint-Michielsstraat.

Compared with the other colleges featured in the map, this one clearly had a spire, quite likely of a chapel. Considering that the Villerscollege was specifically used by already-ordained friars from the Villers Abbey, it wouldn’t be impossible that this refugehouse also had an internal chapel. But since there are no surviving pictures of the original buildings of Villerscollege, this remains an assumption.

A counter argument against my theory is the founding date. The Villerscollege was officially founded in 1660, eleven years after the publication of the map. But seeing that student friars were sent to the refugehouse since the 15th century, it was possible that the Villerscollege was already a functional ‘study house’ before its founding.

Another Number 30: the “Moribus Antiquis”

Curiously, the map also contained another Number 30 on the modern-day Parijsstraat. It somehow marked the spot which could have been the house of Leuven humanist and historian Justus Lipsius (1547-1606). Called the “Moribus Antiquis” meaning “Of Old Habits” – a personal motto of Lipsius, this was certainly not a college. But more information about this location in a future post.

After the First World War, the building was enlarged with an auditorium and laboratories in the garden at the back. A first restoration took place in 1961 and then in 1991 after the state took over the ownership of the building, which also tore down the 20th century wing to restore the appearance of the Louis-XV style building back to its former glory.

Closed to the public, there are two treasures of the Villerscollege: one is the elegant wooden Rococo stairwell in remarkably good condition, and the other is the centuries-old Gingko tree in its garden.

Today, the Villerscollege houses the Royal Archives’ office in Leuven and the Leuven’s Civil Court since 2001.