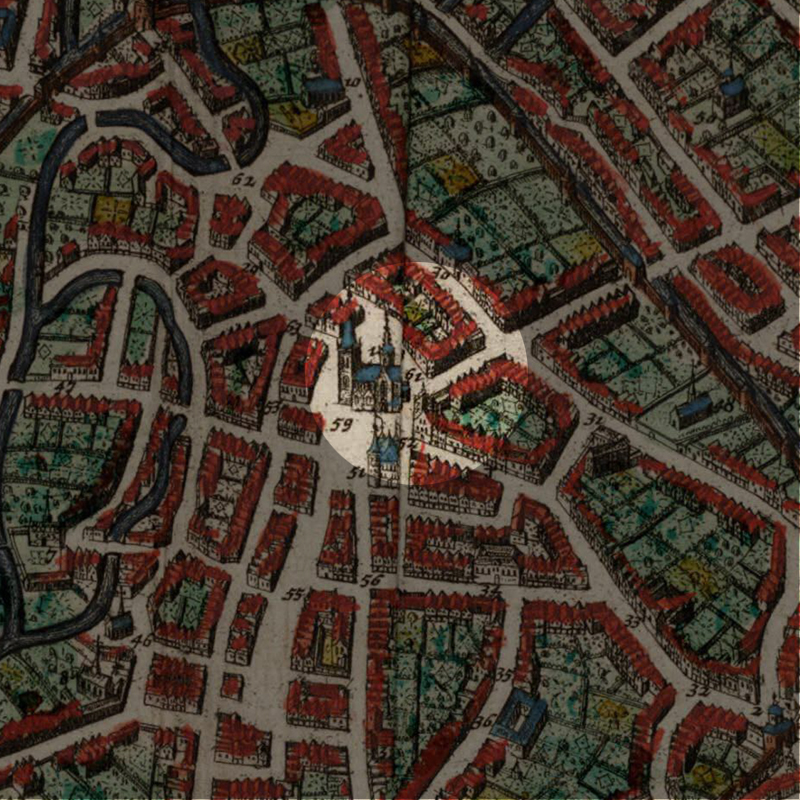 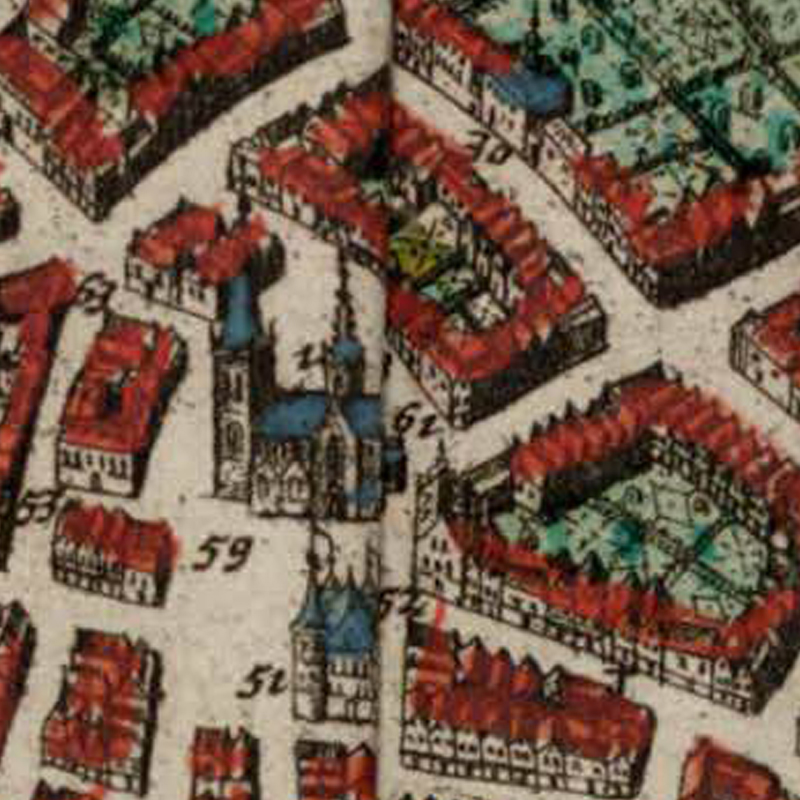 Where the Tiensestraat and the Diestsestraat meet and outside the choir of the Sint-Pieterskerk, was Leuven’s old Hooimarkt (hay market). On the 1649 map, it included the sale of wood, which does make some sense.

Initially called the ‘Radermarkt‘, the word could refer to a medieval word ‘rade‘ for the clearing of forests. Hence the reference to the sale of wood, that was harvested by clearing forests into farmland.

The Road to the Station

In 1837, a street was built in the direction of the small train station, and this street was christened ‘Statiestraat‘ (Station Road). By 1863, this street inched to closer to the Grote Markt.

The first extension was to the ‘Nieuwstraat‘ (modern-day L. Vanderkelenstraat). In 1867, this passage was leveled and paved, inaugurating the Leuven’s new theatre the Schouwburg.

With the construction of a new Neo-Classical train station in the years 1876-1879, the idea was to have a straight line leading from the station all the way to the Grote Markt.

For this final phase, which happened between 1869 and 1875, the city, out of the exorbitant costs of the project, passed it on to the Cordemans family, who already owned almost half of the properties here. In order to correct the straightness of the new boulevard, the 18th-century Brouwershuis (Brewers’ House) had to be demolished. The resulting kilometre-long new axis has a distinctly bourgeois character, typified by stately, Neo-Classical single-home houses and urban mansions.

With the demolition of the Brouwershuis, the Hooimarkt suffered the same fate.

There was much criticism from Leuven’s inhabitants about this new linear connection between the train station and the Grote Markt: It has destroyed the former enclosed nature of the square, and took away the breathtaking and surprise effect for someone to first enter the Grote Markt. This feature has been kept in the Brussels Grote Markt.

In August 1914, Leuven’s centre was laid to waste by German troops in what is now known as the Great Fire of Leuven on the night of the 25th of August, which lasted till the 28th. With the surrounding area of the Grote Markt completely flattened, this was the chance to correct the ‘mistake‘ of opening up the view of the Grote Markt, and once and for all, screen it off.

The project of the ‘screen block‘ was drawn up in 1919, to shorten the Statiestraat and build in this last section where the old Hooimarkt used to be a screen of buildings.

However, this was never realised for financial reasons. Instead, the space had to be converted into a green zone, and thus turned into a square in 1925 named after the French Marshal Ferdinand Foch (1851-1929), commander-in-chief of the Allied forces on the Western Front: the Maarschalk Fochplein, or ‘Fochplein‘ in short.

Next to the new square, the ‘old’ Brouwershuis was reconstructed in 1923-1926. Today, it houses the fastfood restaurant Burger King and student apartments above it.

In May 1944, the new Fochplein was once again destroyed, this time by Allied Forces. But this time round, the rebuilding was regulated by a strict regulation imposed by the city: all the buildings now have to harmonise with the Gothic monuments in and around the Grote Markt.

After the Second World War, the Statiestraat was renamed “Laan der Verbondenen” (Boulevard of the Allies), and more recently into a less mouthful version, the “Bondgenotenlaan”.

The current layout of the square dates from 1975. Bear in mind, this was and still is the busiest crossings in the centre of Leuven, where buses and cars pass through every day to get to another part of the city. This has largely been reduced by making the Grote Markt traffic-free in the 2010s, but the need to deal with the bus and bicycle traffic was very real. Just imagine if the space had really been filled with a screening block.

In 2006, plans were made to completely renew the Fochplein, with modern bus stops and bicycle parkings.

Then in 2011, the name ‘Maarschalk Fochplein‘ was finally abandoned, and in the words of Leuven’s former longstanding mayor Louis Tobback: “This square should never have been named after a man who was responsible for millions of deaths in the First World War”.

Consensus was finally reached among all the political parties in February 2011 to name the square after Pieter De Somer, the first Rector of the Dutch-speaking Catholic University of Leuven – Katholieke Universiteit Leuven, now better known as KU Leuven. The change was accepted by the city council on 29 August the same year and the square is now known as ‘Rector De Somerplein‘. 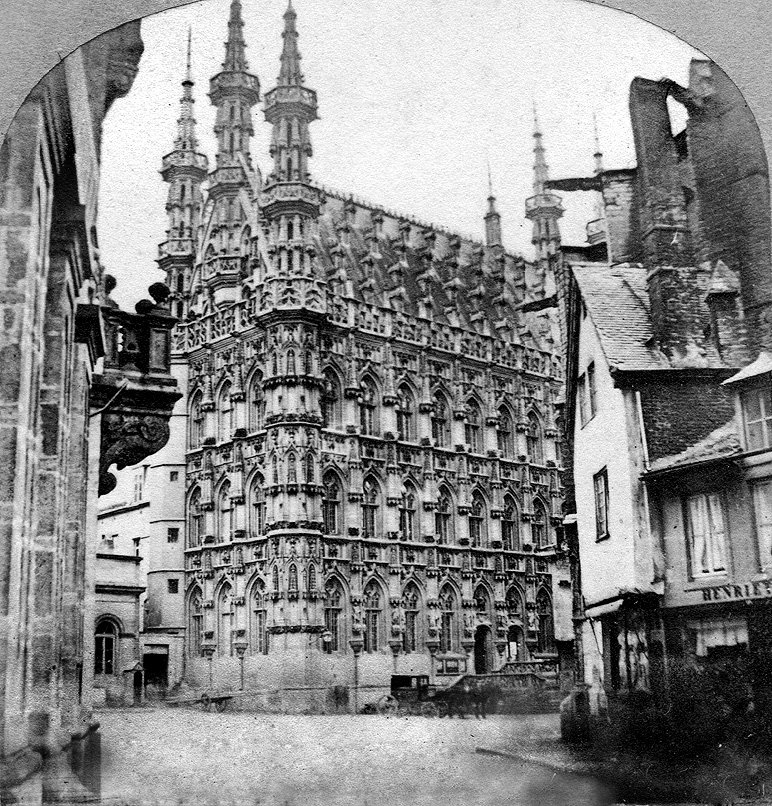 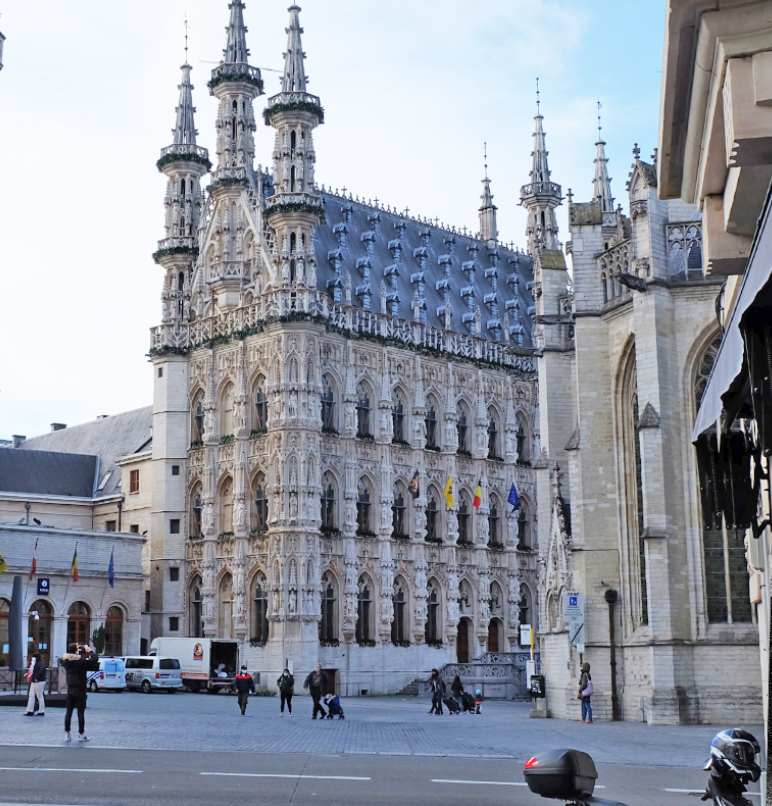 In 1975, the newly laid Fochplein coincided with the 550-year anniversary of the Leuven University. A water fountain with a bronze statue was placed here as the centrepiece. Sculpted by J. Claerhout, the statue is called ‘Fons Sapientiae‘, Latin for the ‘Source of Wisdom‘. It is known affectionately as ‘Fonske‘ by the locals, and it features a student, reading an open book, with a glass that continuously pouring water into his open head. A bit of a macabre image, university students joke that the never-ending glass is actually a beer glass and is thus their source of wisdom.

Like the Manneken Pis in Brussels, Fonske gets dressed in different costumes on special occasions.

At the end of the Diestsestraat, on the right on the current Margarethaplein, the pub called ‘De Fiere Margriet‘ housed in a 17th-century building is extremely well-known. It offers no fewer than 280 different kinds of beer, including those by very renowned local brewers in the region such as Broeder Jacob and Hof Ter Dormael. As you know, the name, translated as ‘Proud Margaret’ refers to a well-known local saint whose chapel is housed in the Sint-Pieterskerk opposite the pub. You can imagine that the pub being a popular watering-hole for the locals by being just by the Hooimarkt.

Although the Hooimarkt is no more, and the dream of some to render the Grote Markt an enclosed square again never came true, the current Rector De Somerplein has never ceased being a busy meeting place of the main arteries of the city of Leuven. History should never ever be forgotten, as those were the memories of the people who came before us, I wish there were a sign somewhere that mentions the site of the old sites of Leuven, like the Hooimarkt.

Hooimarkt, 1850 (Leuven Weleer)
Hooimarkt, 1860 (Leuven Weleer). The building to the left is the original Brouwershuis. The houses covering the side of the church are likewise demolished.
Hooimarkt 2020. Same view as the photo in 1860.
View of the former Hooimarkt from the Margarethanplein.
Fonske.
The new Brouwershuis, moved to the right of the Diesestraat.
Diestsestraat used to lead onto the Hooimarkt.
The famous pub called De Fiere Margriet.
VIEW ALL LOCATIONS OF OUD LEUVEN