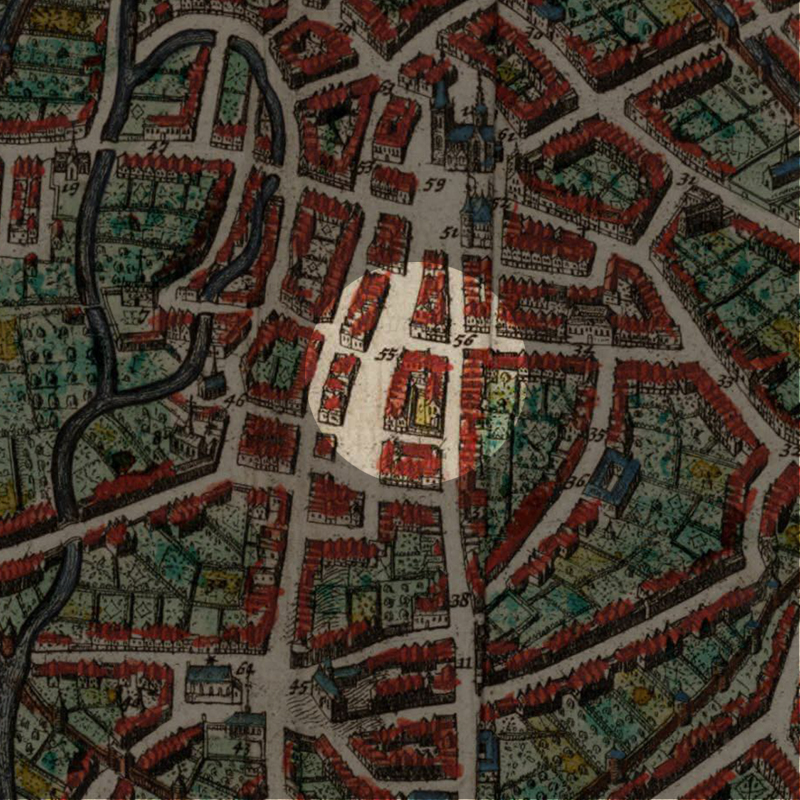 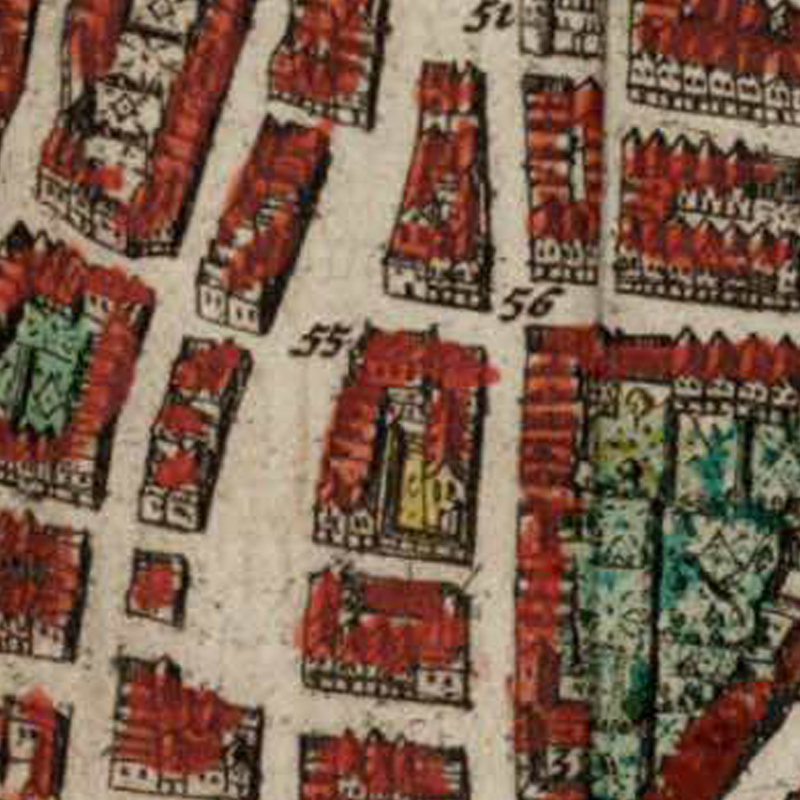 The Move to the Oude Markt

The word ‘corn‘, in English and in Dutch alike, used to mean ‘grains‘. Thus the ‘Korenhuis‘ was a central location where the sale of grains took place.

Leuven’s first Korenhuis – a large wooden hall – was located on the ‘Lagere Plaats‘ (Lower Square) mentioned in a record from 1160, Today, this place is known as the Pater Damiaanplein, where the Sint-Antoniuskapel, the Irish College Leuven and the Hollands College are situated.

In 1255, this Korenhuis moved to the centre of the city by the main market square, today’s Oude Markt, on the Zeelstraat.

And in 1293, the Duke of Brabant Jan I gave the ‘Lagere Plaats‘ square to the city, on the condition that it would never be built on. This condition still stands today.

According to the city’s records, which stated in 1256:

According to archaeologists, when the current Lakenhal was built in 1317, it was linked by a vaulted passage to the old 12th century cloth hall or to the Office of the Weavers in the courtyard at the back. Further from the old Lakenhal – which could be at the current Number 1 Zeelstraat with the sign ‘Koöperatief der oud strijders‘, was the Korenhuis at the end of the street. Opposite the Korenhuis was the Waag.

Here is a side story. The name of the street where the Korenhuis and the Waag are located is the Zeelstraat.
This slightly winding ancient street leads from the Naamsestraat to the Oude Markt, with the Lakenhal and the Korenhuis on one side, and the Waag on the other.

This Middle Dutch word ‘zeel‘ means ‘ropes‘, and the name of the street refers to the ‘Rope Market‘ that used to occupy the exterior of the Korenhuis, as shown by a record in 1487:

Because the word is not used anymore by the 19th century, it led to the confusion that the street was named after the patrician family Sadeleere who used to own a property on this street.

According to Leuven’s 19th-20th century city historian, Edward van Even, the Korenhuis stood until ‘the end of the Austrian regime‘, and it had no artistic value whatsoever. This was where farmers came to sell their grains, and they paid a fee for the display of their goods to the ‘benefit of the sovereign’. This fee, called the ‘lepeltol‘ (spoon toll), allowed the Korenhuis to be open ‘on all days of the market‘. In the 18th century, this toll also allowed farmers to ply their goods on the Oude Markt itself.

Below the main hall of the Korenhuis were five small shopfronts called ‘hallekens‘, which were rented out to small retailers selling along the streets. These shopfronts were closed around 1750, because they were falling apart.

On the facade of the Korenhuis, there were metal hooks along the walls. These were intended for ‘foreign‘ (i.e. non-Leuven) butchers to come sell their meat here, once a week. It was apparently that by the mid-18th century, the Korenhuis was not entirely dedicated to the sale of grains.

City records show that by then, both the Korenhuis and the Waag had become private properties.

It is not known when the building of the Korenhuis was torn down. But the German bombardment of Leuven that led to the Great Fire on 22-24 August 1914 completely destroyed the Zeelstraat and the whole of the Oude Markt. This means that not even the foundations of the Korenhuis could be found.