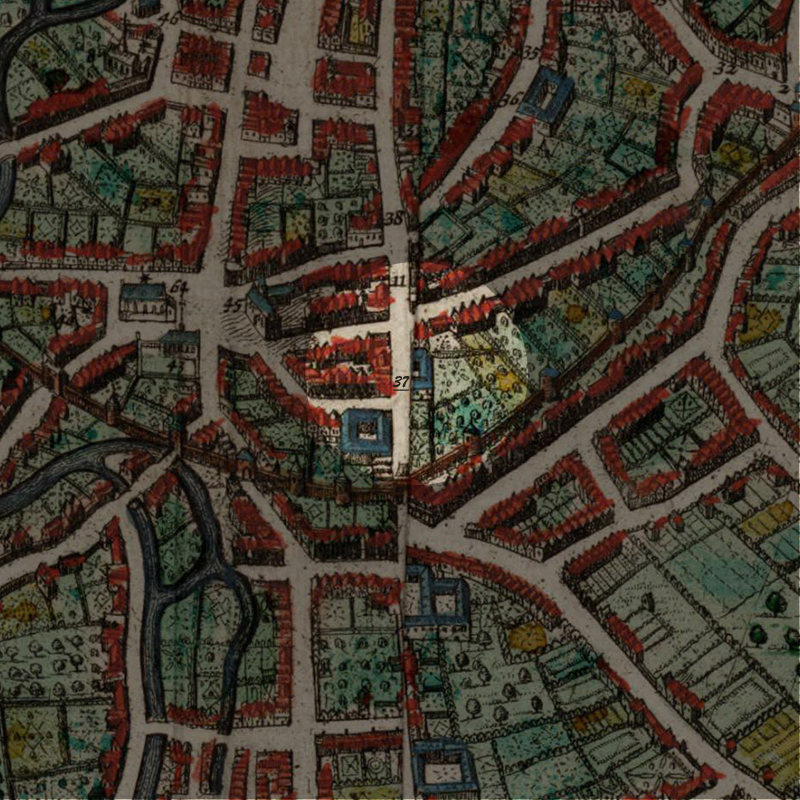 Nicolaus Ruterius was an important figure in the Burgundian court in the 15th century. Hailed from Luxemburg, his real name was Nicolaas Ruter. Ruterius arrived in Leuven when he was appointed provost of the Sint-Pieterskerk (St Peter’s Church) and also Chancellor of the University of Leuven. Ruterius rose to become the Bishop of Atrecht (modern-day Arras in France) in 1502.

Now, Ruterius was a friend of the Professor of Theology Jan Standonck who founded in 1500 a college, exclusive for students of little means.

According to Standonck, the lack of money forced the students to obey this college’s extremely strict regime. This was highly conducive to the instruction of future monks or persons who truly fear God.

With the further encouragement by his other friends, the Dean of the Sint-Romboutskathedraal (Saint Rumbold’s Cathedral) in Mechelen, Johannes Robbijns, and Adrianus Florenszoon, Senior Lecturer in Theology and Dean of Sint-Pieterskerk (St Peter’s Church) and later Pope Adrianus VI, Rutterus bought a parcel of land between the land owned by Joost Absoloens (later the Premonstreitcollege) and the domain of the Van ’t Sestich family.

In 1508, the Atrechtcollege was officially established, named after the bishopry of Ruterius. With places for 13 poor students in arts, the college is reserved for young men from Atrecht, Haarlem, Kamerijk, Luxemburg and Leuven.

The Richest College for the Poorest Students

Fortunately for the poor students, the Atrechtcollege was destined to grow wealthier and wealthier since its founding. Ruterius showered it with his own resources and his powerful friends did the same. Between the 17th and 18th century, the college grew in size and intake. In 1633, its president Jan Schinckels built a new building in the big garden for students as well as a principle building “groete huys” for himself. In 1774-1776, the college underwent a complete renovation under president Gerard Deckers, which transformed the site into a “modern” French “hôtel” with a courtyard and a garden.

Much of what we see today remains from that time.

From a boys’ school to a girls’ school

After the dissolution of the University of Leuven in 1797, the Atrechtcollege entered into the hands of private persons. In 1807, it was bought by a wine trader De Bruyn.

It was said that he was the one who planted the Japanese pagoda tree (Japanse honingboom) in the front garden in 1818.

The property that De Bruyn also had a huge chunk of the original garden gone. It was taken by the city of Leuven in 1870-1871 to form part of the new Sint-Donatiuspark.

In 1921, the whole complex was bought by the Congregation of the Daughters of Maria of Paridaens, who in the name of the new University of Leuven, made the site into a girls’ school. More renovation work was done to transform the buildings into this function. It was not until 1979, under the director-engineer A. Verheyden of the university that the site was brought back under the university itself.

It was during the years 1921 and 1977 that the Atrechtcollege was a girls’ school. By this time, the Japanese pagoda tree had grown into a big tree. It is said that boys were loitering under its shade outside, as their girlfriends returned to the college by seven in the evening.

Hence the tree became to be known as the Tree of Deep Sorrow (Boom van het groot verdriet).

The Heavenly Sphere of Ferdinand Verbiest

Father Ferdinand Verbiest was a West Flemish Jesuit missionary (9 October 1623 – 28 January 1688). An accomplished mathematician and astronomer, Father Verbiest traveled to China and presented this sphere to the Emperor Kangxi. Known in China as Nan Huairen (南懷仁), Verbiest became a trusted subject of the Emperor and corrected the calendar used by the court in 1670. In return, Verbiest could spread his religion to the Chinese subjects in the capital.

The replica sphere that you find in the inner courtyard of the Atrechtcollege was made in 1775.

Today, the college houses the International Office of the KU Leuven.

The front garden on the streetside and the Japanese pagoda tree became protected monuments and landscape in 1974.