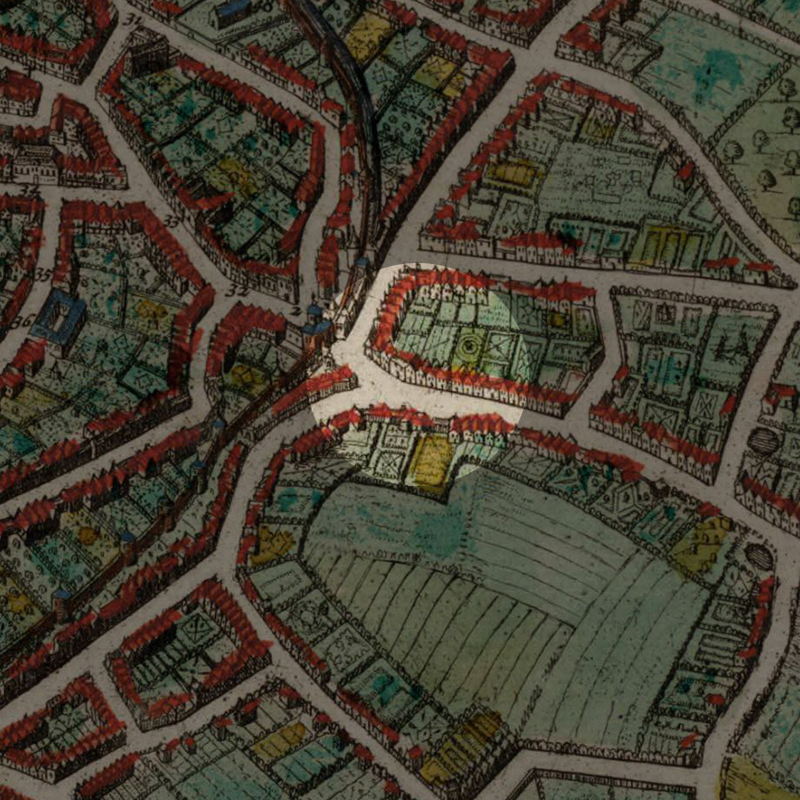 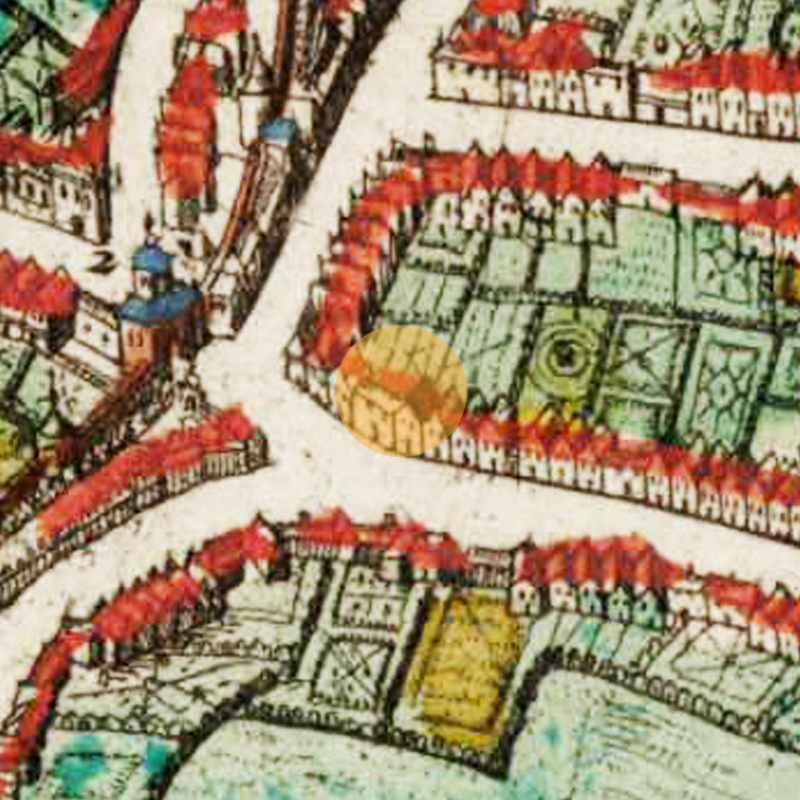 Hence, while the formal name “Klooster van de Ongeschoeide Karmelietessen” (Convent of the Discalced Carmelite Sisters) refers to the buildings that used to house the order of nuns, we have to bear in mind the extreme humility and poverty in which the nuns were (supposed to be) conducting their daily life. This has an immense impact on the reputation of the order and the huge political support the sisters have received from the highest levels of society, as we shall see later in this article.

In 1606, a young Antwerp heiress by the name of Constance Hellemans had a brief stay in Brussels. Miss Hellemans was a very religious young lady, and during her visit, she approached her spiritual adviser, Dom Bernard de Montgaillard, a preacher at the Court of the Archduke Albert and Archduchess Isabella. The priest recommended her to read the works of St Teresa of Ávila (1515-1582). Young Hellemans was so taken by the reading that she was determined to found a community of Discalced Carmelite nuns in Brabant.

To do so, Hellemans went to seek an audience in with Mother Anna de Jésus in Brussels, who was a companion of St Teresa, to whom she explained that her new community should not be in her native Antwerp which was “large and opulent” but rather in the city of Leuven. Anna agreed to help young Hellemans plead her case. Without haste, the old sister presented the demand to the Archduchess Isabella, who in turn related it to her husband the Archduke.

This shortcut to power led to the permit granted by the Magistrate of Leuven to Miss Hellemans on 14 September 1607 to form a community of the Discalced Carmelite Sisters.

The first convent in Leuven that housed the Order of Discalced Carmelite Sisters was established “three days before All Saints” in 1607 in the modern-day Vital Decosterstraat. At that time, the street was called the ‘Bakeleynstrate‘ as it was built on top of the remnants of the first city wall alongside the moat. The new Klooster van de Ongeschoeide Karmelietessen was founded in the premises on the eastern corner of the street with Diestsestraat. The buildings were formerly occupied by the Jesuits from 1560 to 1595.

Right opposite the new premises of the Discalced Carmelite Sisters was the former Vivès House, which became the Refuge of Floreffe or ‘Godshuis van Gempe‘.

The inauguration of the new Klooster van de Ongeschoeide Karmelietessen in Leuven was a politically significant event.

Being the founder, Miss Hellemans went ahead out of the city to escort the entry of Mother Anna de Jésus into the city. She was accompanied by many other young ladies of noble descent, while Mother Anna brought with her Dom Juan de Quintaduenas, director of the Carmelites in the Spanish Habsburg Netherlands. Once the convent was blessed, Mother Anna thanked all those who donated generously to the founding of this new community, including Madam Anna Nunnez Perès, wife of the Mayor of Leuven, Knight ‘van den Tymple’.

Yet by 1620, the convent had become too small to house the rapidly growing community of the order.

The sisters had their eyes on a bigger property along the Tiensestraat, right opposite the Vlamingenstraat. They also continued to received solid financial support from the highest level – the Archduke and -duchess donated all the wood necessary for the construction and the Abt of Liessies who was from Leuven himself paid for most of the construction. By 21 November 1621, the Discalced Carmelite Sisters moved into their new home.

More about the Vital Decosterstraat: Before we speak about the second convent, it’s worth noting that Irish pastors founded a pastoral college in the old building of the nuns along the Vital Decosterstraat, called the ‘Iers Pastoraal College’ (1623-1797), which was different from the Irish College. The moat along the ‘Bakeleynstrate‘ was only dammed up in 1785 and filled up in 1838, after which the street was widened and renamed ‘Weezenstraat‘ (Orphans Street). Or in the local form ‘Wieezenbêrg‘. The current name only came about after the merger with the Marengostraat in the early 1900s, and it was named after a former Mayor of Leuven, Vital Decoster.

The two houses that provided the terrain for the new Klooster van de Ongeschoeide Karmelietessen along the Tiensestraat was called the ‘Perron‘ and the other ‘Sint-Chrystophore‘. The convent was fenced by a brick wall and the primary entrance directly faced the Vlamingenstraat. It was only 5 years later in 1626 that works on the convent’s chapel itself started. The chapel would only be completed in 1631, and consecrated in as late as 1644.

One of the possible reasons for the late consecration of the church of the Klooster van de Ongeschoeide Karmelietessen was the Siege of Leuven that took place from 24 June to 4 July, when Leuven was under attack from the Dutch (in cahoots with the French). More of that can be found in the entry on outer city gate Tervuursepoort.

The Carmelite nuns however were safe: they sought refuge in Brussels, then in Ghent.

They returned to the convent on 18 July, and found that while their convent was completely intact, the houses on both sides were devoured by flames.

So what did the poor and humble reformed nuns do? They then bought the terrain and extended their convent on both sides and towards the back, right up to a path called ‘Muizenstraat‘ or ‘Muizengang‘ by the Ravenstraat.

You must have noticed by now, that Leuven’s Klooster van de Ongeschoeide Karmelietessen lived quite the opposite existence to the general practice of the order. The sisters of Leuven’s Theresianenklooster had as much financial and political backing as they want, especially because they came from rich and powerful families all over the Spanish Habsburg Netherlands.

One of the Seven Wonders of Leuven

The church of the Klooster van de Ongeschoeide Karmelietessen (Order of Discalced Carmelite Nuns) was one of the famous Seven Wonders of Leuven.

According to Edward van Even, the Baroque church of the Klooster van de Ongeschoeide Karmelietessen had no church tower. Instead, it had a bell tower right above the Sacristy and rose slightly higher than the ridge of the roof. You can see this on the drawing by A Joos, which historian Edward van Even included in his book ‘Louvain Monumental‘.

You may wonder: Why is this even a ‘wonder’? The church just had a lower bell tower, and it really wasn’t that unique. The reason lies below:

A ‘Christine Puteanus‘ (a Latinised version of the Dutch name – Christine van der Putte) took her vows in the Klooster van de Ongeschoeide Karmelietessen on 21 May 1609. She was certainly one of the most learned sisters the Order had even recruited, if not the most: she spoke Latin, French, Italian, German and English, apart from her native Dutch. Her religious name was Christine of St Michael. Christine of St Michael later went on to found the Order in Krakow, where she died in 1626. Christine Puteanus was none other than the sister of Erycius Puteanus (Eric van der Putte), the humanist scholar and Professor at the University of Leuven, who created this list of the Seven Wonders of Leuven in 1646.

The End of the Carmelites

With the edict of Emperor Joseph II in 1783, the Orders of the Carmelites in Leuven were abolished and the sisters of the Klooster van de Ongeschoeide Karmelietessen were evicted.

The premises became barracks for Austrian troops and later French ones during the French Revolution. By 1808, the convent was divided into two lots and placed on auction. The first lot comprised the buildings along the Tiensestraat – after the sale, everything including the church, Leuven’s Seventh Wonder, was demolished. The second lot, which covered the areas of the garden and other buildings stretching from the Muizenstraat all the way to the Maria-Theresiastraat. According to 19th-century historian Edward van Even, some of the private houses within this area still contained fragments of old buildings of the Klooster van de Ongeschoeide Karmelietessen, such as the old refectory. It is not certain whether this still holds true today.

With nothing left from the Klooster van de Ongeschoeide Karmelietessen, the only visible remnant is the previously unpaved path called Muizenstraat (Mice Street), the limit to which the convent extended its compound after the Siege of Leuven. Today, it has been renamed ‘Theresianengang‘ (Teresian Alley) in memory of these rich and powerful Carmelite sisters.

The Comeback of the Discalced Carmelite Nuns

In 1839, Mother Eugenie of Kortrijk and Mother Theresa-Joseph of Ghent founded the new Klooster van de Ongeschoeide Karmelietessen on the Naamsestraat in Leuven. They took over the ancient house of the Schotte – an old noble family of Leuven. From 1842 to 1877, this new convent had the support of Professor Francis d’Hollander of the Heilige-Geestcollege. In 1868, there were plans to establish a new community by the Karmelietenberg, but the lack of finances stalled the idea.

In the Middle Ages, this road was called ‘den Goeden Hollenwech‘ – the Good Holloway. This was one of the paths where for centuries, people crossed from the upper town (of Naamsestraat) to the lower town (used to be ‘Benedenstraat‘ but nowadays called ‘Schapenstraat‘) to fetch water. With erosion, these paths from upper to lower town became holloways. The ‘Sneppenberg‘ (today’s Sint-Beggaberg) was called the ‘Cleynen Hollenwech‘ (Small Holloway). The road beside the Arenberginstituut known as ‘STUK’ nowadays is now cut off, and it used to be called the ‘Kwaden Hollenwech‘ (Evil Holloway).

So on the right of the Karmelietenberg – den Goeden Hollenwech – was the Aulnecollege, now the Amerikaans College (American College). On the left, was the ancient house of the Schotte, where the new Klooster van de Ongeschoeide Karmelietessen existed from 1839 to July 1973 when they moved definitively to Court-St. Etienne.

After the departure of the Carmelite sisters, the city tore down the convent to build a carpark for the Heilig-Hart hospital right opposite. Today, the carpark is underground and residential blocks are built above. There is absolutely no trace of the former House of the Schotte family nor of the 19th century convent.

Today, the original Klooster van de Ongeschoeide Karmelietessen, commonly known as the ‘Theresianenklooster‘, is no more. The only remains still visible is an alley named after them called Theresianengang.