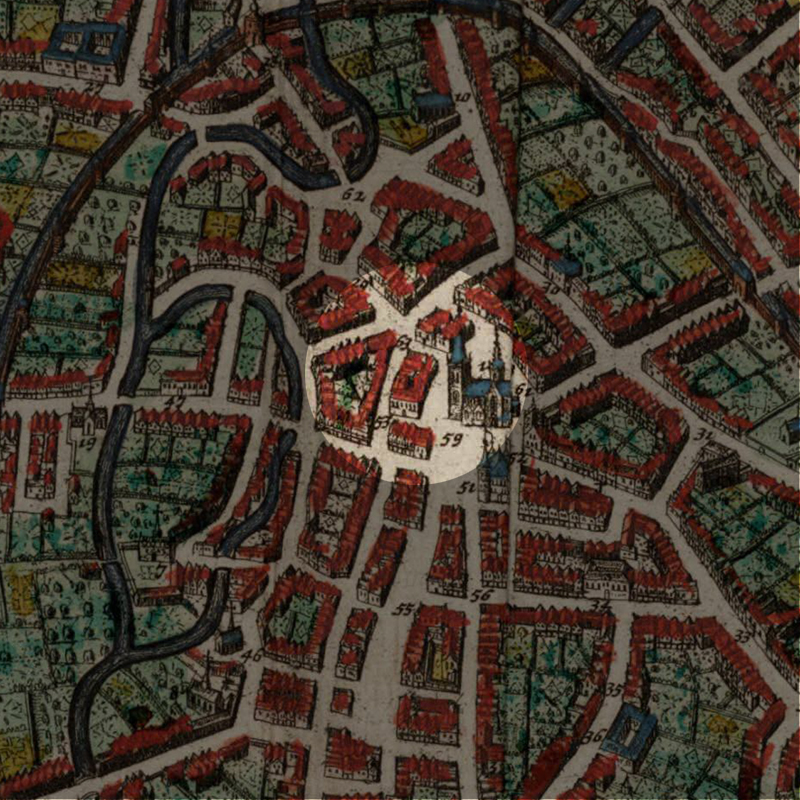 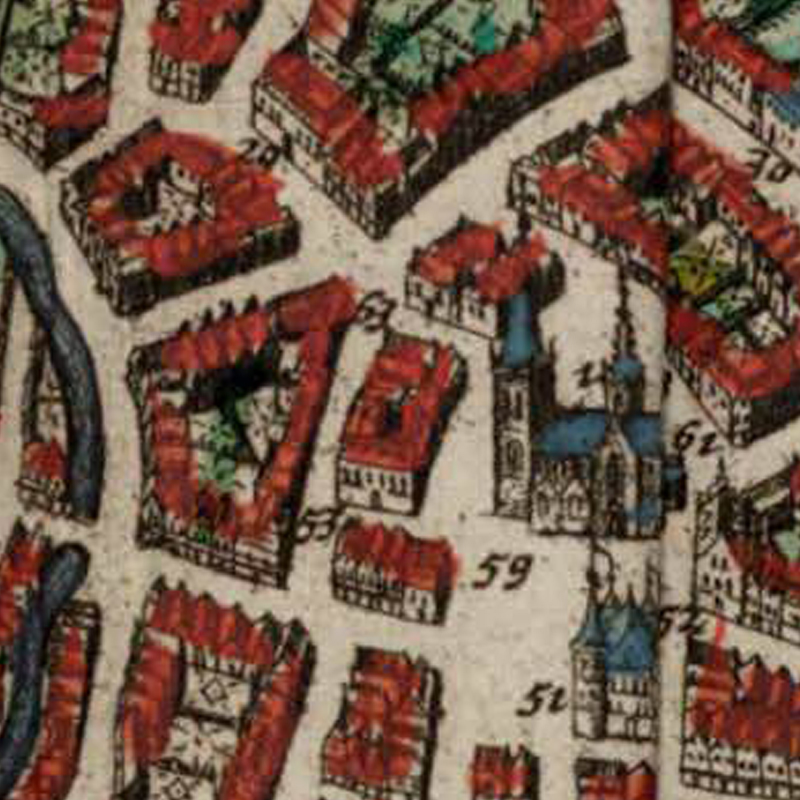 According to records, Leuven’s ‘Macellum‘ (Meat Market in Latin) stood on this spot since 1216. It was a simple, large building of only a ground floor, that belonged to the Duke of Brabant. As you know, Leuven was the capital of Brabant until it was taken over by Brussels in the 15th century.

Inside the Vleeshuis, the vending area consisted of two rows of benches that served as stalls. One row was called the ‘Draek‘ (Dragon), while the other row was called ‘Perdeken‘ (Horse). The benches were sold and rented out much like real estate, to butchers from inside and outside the city.

In 1512, the Vleeshuis was given a different look by Mechelen’s master mason, Antoon Keldermans, who gave it a stone facade entrance (facing Mechelsestraat) with two large and six smaller pillars. However, he died in 1514 before he could see his work finished.

Crushed by the Sint-Pieterskerk

On 22 December 1603, the towers of the monumental Sint-Pieterskerk collapsed. One of the towers fell onto the Vleeshuis, completely crushing it into pieces. Until today, the church itself never recovered from its tower-less look, and when it had towers, it was even the largest and most imposing Gothic church in the whole of Europe.

The devastated Vleeshuis laid in ruins for nearly 10 years, to the chagrin and frustrations of the city’s inhabitants.

The Archduke Albert and -duchess Isabelle took the decision to gift the ruined building to the butchers themselves, on the condition that the profession will rebuild the Vleeshuis at their own cost, and to place the Royal Shield of Spain on the facade. Work began in 1612 and completed in 1613.

Compared to its predecessor, the look of this new Vleeshuis was nothing to shout about. It was purely functional. And it was this Vleeshuis that served the citizens right into the 20th century.

The decline of the Vleeshuis

Leuven lived through a tumultuous period under the French invasion in 1795. The Vleeshuis was sold into private hands by the French revolutionaries. When the French finally left, the Vleeshuis only returned to local ownership in 1811. But by the middle of the century, the law changed in 1849 to allow butchers sell their meats ‘from home’ (meaning their own shops). The remaining sellers who still sold meat in the Vleeshuis were the owners of the benches/stalls, no longer the tenants. In fact, by 1891, the Vleeshuis was some kind of public market that sold anything, not just meat.

In August 1914, Leuven was nearly completely destroyed by the invading Germans. The university library was burnt down. The Tafelrond was ruined. The Sint-Pieterskerk was reduced to its bare bone foundations. And the Vleeshuis was so completely burnt that there was absolutely nothing left.

It was then that the city took the decision to turn this into an open space called ‘Parvis Saint-Pierre‘. In 1940, the space was renamed ‘Mathieu de Layensplein‘ to honour the city’s renowned architect.

The Mathieu de Layensplein is also known in the local tongue as the ‘Zeven Hoeken‘ (Seven Corners). This is because it was the area is enclosed by seven street corners with the Leverstraatje, the Pensstraat, the Schrijnmakersstraat and the Jodenstraat.

In the 14th century, this place was only known as the ‘omgeving van het kerkhof‘ (the area around the churchyard). This later developed into ‘aan de Lange Trappen‘ (at the long staircase) – referring to the western entrance of the Sint-Pieterskerk. The name ‘Lange Trappen‘ is still used by the building opposite the church, now occupied by the café ‘Dokteur Leuven’.

In fact, this whole area was known as the ‘Slachthuiswijk‘ (Slaughterhouse/Meat District) of Leuven, all the way to the river Dijle along the current-day Dirk Boutslaan.

Today, only the Pensstraat (Tripes Street) is the only reminder of the former meat district.
Formerly, there was Kalvermarkt (Calf Market, the small street between the church and the Vleeshuis, today the street has lost its name but is still there leading to the Grote Markt from the Mathieu de Layensplein), Leverstraat (Liver Street, today the small section of the street leading to the Mechelsestraat), Slachtstraat (Slaughter Street, today’s Dirk Boutslaan from Mathieu de Layensplein until the bridge and Wandelingenstraat)

After the dreadful destruction of 1914, the city administration decided to make use of the opportunity to sanitise the whole Meat District, which was their plan for a long time, since the area was dirty, unhygenic and very poor – right in the centre of the city.

Already in 1781, the slaughterhouses in the Slachtstraat were centralised in a building further down the road in the corner between the modern-day Amerikalaan and Lei. This was initiated by the mayor Jan Laurent de Vroye, and was the first central public slaughterhouse in Belgium. In 1908, an even larger building was erected along the Kapucijnenvoer, and this moved the slaugherhouse to the outlying quarters of the city.

Now that the Vleeshuis is changed into a square, the other meat businesses were driven out, with exception of the Pensstraat.

Located in the former chapel called Sint-Elooikapel (Sint-Eligiuskapel), this small meat market was located between the houses ‘Den Perselaer‘ on the left and ‘Den Loop‘ on the right.

Built in 1456 by the Guild of the Smiths, the Sint-Eligiuskapel was made defunct by the French occupiers in 1797, who turned the building into a meat market. This lasted only until 1850.

Today, you can still see some traces of the architecture of the chapel in Numbers 42 and 44 on the Parijsstraat.

Today, there is no trace at all of Leuven’s ancient Vleeshuis on the Mathieu de Layensplein. With exception of the Pensstraat, there is likewise no reminder of the larger meat district that used to occupy these ‘seven corners’ below the ‘long staircase’ of the towerless Sint-Pieterskerk.