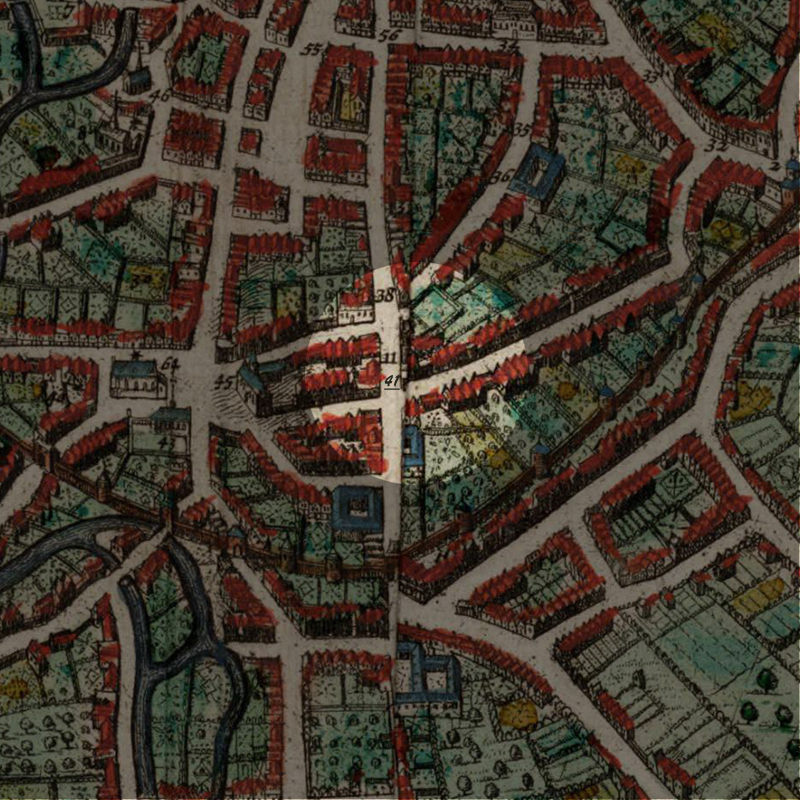 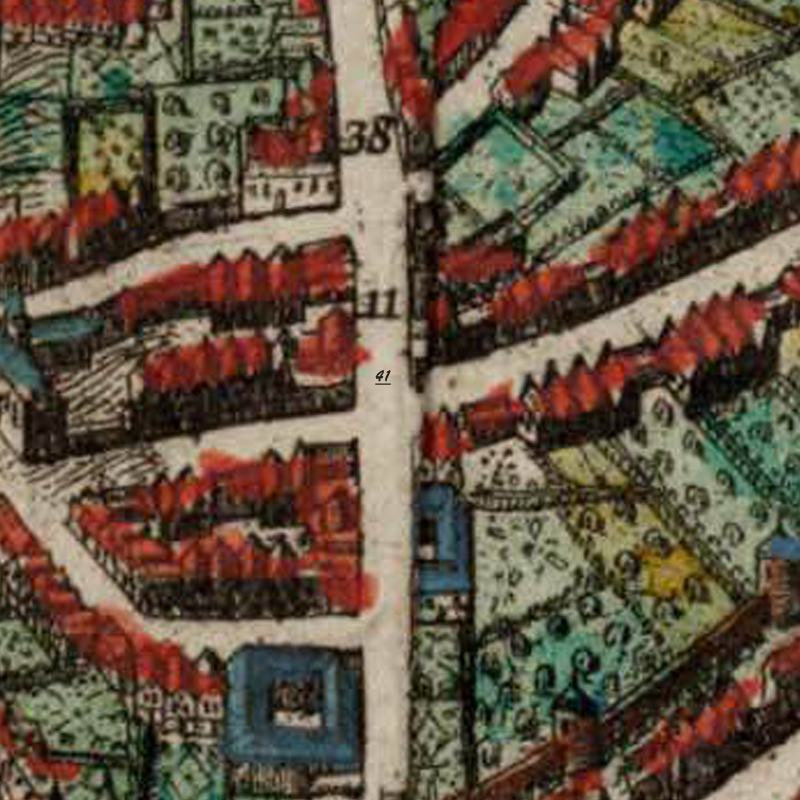 By the decree of the King

As the most established university within the Habsburg Empire, Leuven could not have not include a royal college. With the encouragement of Bishop of Roermond and Inquisitor, Wilhelmus Lindanus and the Bishop of Tournai, Jean de Vendeville, the King of Spain Philip II (son of the Holy Roman Emperor Charles V) set up the Koningscollege in 1579, and named Johannes Molanus as its first director.

Apart from supporting the Koningscollege financially, the King also nominated directors and professors. With students from across the Empire studying for priesthood, the Koningscollege also taught them now to debate and argue with (fictitious) protestants.

From 1576 to 1586, the Koningscollege was temporarily housed in the Heilige Geestcollege, until it managed to buy the property of “thuys van Ath” from the Lord of Bossut, Antheunis vanden Berghe. This city mansion of Lord Bossut was located in the corner where the Prooststraat (medieval name of the current Naamsestraat) and the Kattenstraat (medieval name of the current Charles de Bériotstraat). The exact appearance of the mansion has been lost to history.

By the middle of the 18th century, the early medieval city mansion “thuys van Ath” was dilapidated. The then-director Jean-François Thysbaert began raising funds to rebuild the college in 1775. Coincidentally, the Jesuitscollege next door (Jezuïetencollege) was empty because the Jesuits were banned in 1773. With the funds he managed to obtain, Thysbaert was able to incorporate the Jezuïetencollege, tear down the old thuys van Ath, and build an entirely new complex in the style of Louis XVI, by the year 1779.

The imposing new facade along the Naamsestraat includes a grand entrance, above which the shield of the King of the Spanish Kingdoms was featured. Beneath the shield, were the words “COLLEGIUM REGIUM FUNDAT.A.MDLXXIX.RENOVAT.A.MDCCLXXIX“.

The building was finally returned to the city in 1805, but in 1815, the occupying Prussian forces used it as a military bakery.

The Beginning of Zoology in Leuven

Peace finally returned to the Benelux, after the departure of the invaders and the establishment of the United Kingdom of the Netherlands (Verenigd Koninkrijk der Nederlanden) in 1815, uniting the Southern and the Northern Netherlands once again after the protestant Dutch Provinces broke off in 1581.

The university was revived as the Royal University of Leuven (Rijksuniversiteit Leuven) in 1817 by King Willem I.

The city gifted the Koningscollege back to the university which established in 1818 the department for biotanical and zoological sciences (Kabinet Plant- en Dierkunde). The King Willem I provided funds to buy specimens from the UK, France and Germany, this provided the basis for the collection the Koningscollege’s future as a leading zoological centre.

Still divided by religion and culture, and sitting on the faultlines between Germanic and Roman-Celtic civilisations, the United Kingdom of the Netherlands was short-lived.

In 1830, the Southern Netherlands left the union and formed the current-day Kingdom of Belgium. The Rijksuniversiteit Leuven was refounded as the “Free Catholic University of Leuven” (Vrije Katholieke Universiteit Leuven) in 1835. The Koningscollege became the Institute and Laboratory for Zoology, Paleontology and Similar Anatomy (Instituut en Laboratorium voor Dierkunde, Paleontologie en Vergelijkende Anatomie).

Interestingly, Pierre Joseph Van Beneden was a devout Catholic. During his lifetime, he actively condemned the evolutionism theory of Charles Darwin. That did not sit well with his son, a well-known Darwinist and professor in Liège, Edouard Van Beneden, and his neighbour and fellow professor, Henry de Dorlodot. (See below)

Unfortunately for Van Beneden, in an air raid launched by the allied forces on Leuven in 1944, a large part of the collection of the Koningscollege was destroyed, together with a part of the building.

The Huis de Dorlodot and the Arrival of Evolution

Beside the Koningscollege along the Charles de Bériotstraat was a building called Huis de Dorlodot (House of the Dorlodot). Today, it is the LICOS Centre for Institutions and Economic Performance, within the Faculty of Economics and Entreprise Sciences of the KU Leuven.

The Huis de Dorlodot belonged to Henry de Dordolot (1855-1929). De Dordolot was a priest, a theologian, geologist and a paleontologist.

As professor of the geology and paleontology in the Faculty of Sciences, De Dordolot was the first person in the university of Leuven to promote the idea of evolution.

This went in direct opposition to his neighbour, Pierre Joseph Van Beneden, in the Koningscollege.

In 1909, the University of Leuven sent Henry de Dordolot as a delegate to the Darwin commemoration in Cambridge. Henry published his idiosyncratic ideas about the reconciliation between Darwinism and Catholicism in his work “Le Darwinisme au point de vue de l’orthodoxie chrétienne“. This position created a new schism in the Catholic hierarchy, and the University of Leuven received threats from the Vatican. From then on, De Dorlodot stopped his publications on the subject.

The modern-day Charles de Bériotstraat is named after Charles Auguste de Bériot, a Belgian violinist and composer. De Bériot was born in a house along this street on 20 February 1802, although he moved to France in 1810, where he studied under Jean-François Tiby, a pupil of Giovanni Battista Viotti. His house was demolished, as part of the enlargement of the Sint-Donatuspark.

From the 12th to the 19th century, this was called the Kattenstraat, named after cats!

Kattenstraat ran along the inner side of the Leuven’s first city walls, which is why the street is not straight but curved. Somewhere along the bend where the street was close to the city wall, there was a wooden stockade above the wall rampart, where cats liked to gather.

The Koningscollege now houses the Zoological Institute and Museum (Zoölogisch Instituut) of the KU Leuven. You can visit the remains of the original Van Beneden collection upon request. The appearance is inherited from the 18th century renovations, although the allied bombings have destroyed much of the original buildings. The flat slab of stone on the front facade bears testimony to the destructions of the French Revolution where the Spanish Royal Shield should have been.