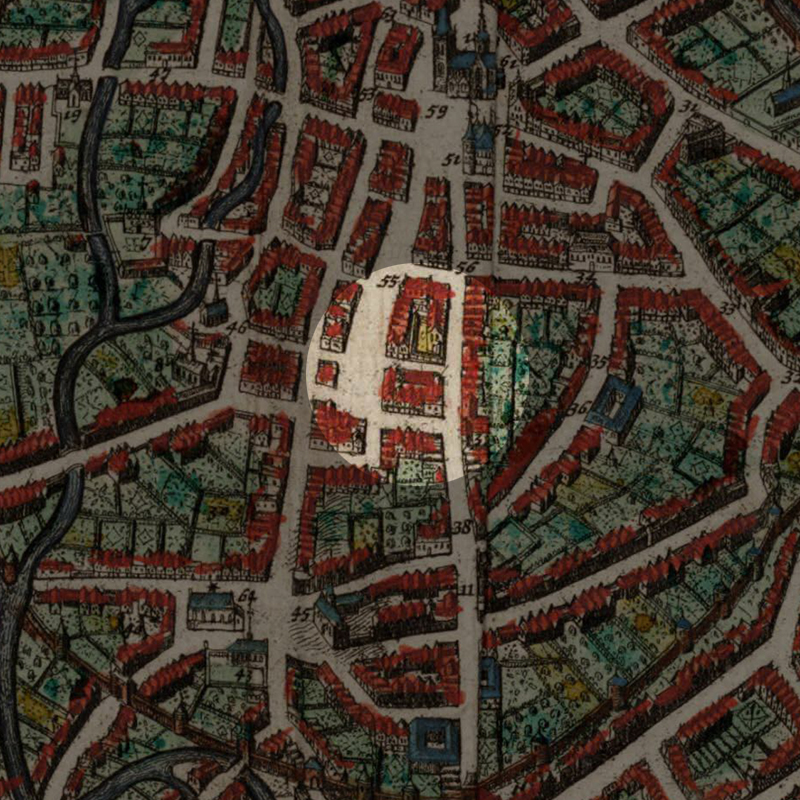 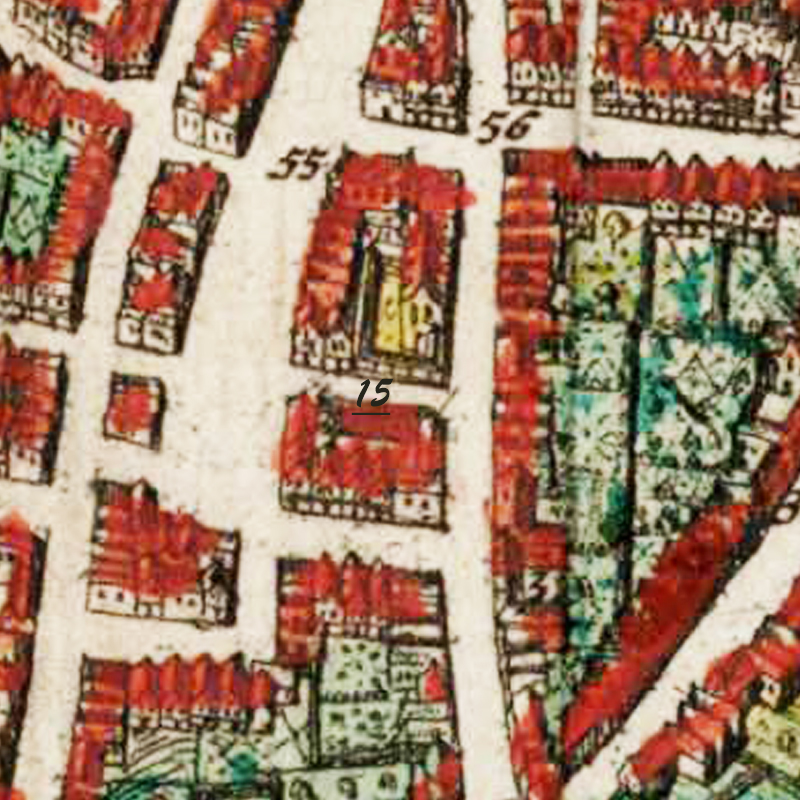 The dates do not match up

I have a problem with this entry. Marked as Number 15 ‘English Jesuits‘ in the legend, the number was nowhere to be found on the map itself. Furthermore, the map predates the founding of the Klooster en College van de Engelse Predikheren, as it was published in 1649. On top of that, the information obtained by the cartographer must have dated a few years earlier too. Was there another monastery founded by English friars in Leuven? This is a huge possibility, because the Sint-Monicaklooster (Convent of St Monica) was founded by the numerous English nuns who sought refuge on the continent following King Henry VIII’s Anglican reformation. Many of them arrived in Leuven as early as in 1540. If there were nuns, there must have been friars as well. In any case, I would be grateful if anyone else has information of English monasteries in Leuven before 1649.

The Interregnum and the Restoration

Before we get further to the presence of English friars in Leuven, let us look at the religious and political context of 17th-century Great Britain.

As you already know, it was Oliver Cromwell who led the army of the English Parliament against King Charles I. Charles who became King of England, Scotland, and Ireland on 27 March 1625, was executed by Cromwell on 20 January 1649. What followed was 11 years of the ‘Interregnum’. This period ended with the return of the Stuart monarchy under Charles II in 1660.

Why was Charles I executed by Oliver Cromwell?

First of all, the English Civil War waged by the Commons was one against how Charles I wanted to govern – as an absolute monarch. The English Parliament has a long history of co-rulership with the monarch since the Magna Carta of 1215, they were certainly not prepared to give up their rights to Charles.

Secondly, this was a religious war. Charles I was born a Protestant but his father James VI/I wanted him to marry Catholic Habsburg princess Maria Anna of Spain, as a means to secure more power for England and Scotland on the continent. This match was fiercely opposed by the Commons, who feared that Charles would then lift the restrictions on Catholic recusants and undermine the official establishment of the reformed Church of England. When the match to Maria Anna failed, Charles eventually married another Catholic, French princess Henrietta Maria, by proxy on 1 May 1625. They only met in person on 13 June 1625 in Canterbury when she arrived in England. Charles even went as far as to delay his first Parliament until after the marriage was consummated, just to forestall any opposition to his marriage.

This marriage took the Parliament by storm. Charles told them he would not relax any religious restrictions, yet it was exactly what he did in a secret marriage treaty with his brother-in-law Louis XIII of France.

To add oil to the fire, Charles I was crowned on 2 February 1626 at Westminster Abbey, but without his wife at his side because she had refused to participate in a Protestant ceremony.

On the other hand, Oliver Cromwell was a Puritan. He believed that the Crown had been corrupted by Catholic infiltrations and he had the full support of the Parliament behind him.

The Role of Cardinal Philip Howard

So what does the religious and civil wars in Britain have to do with Leuven? The answer to that lies with one person: Cardinal Philip Howard (21 September 1629 – 17 June 1694).

Born to the Henry Howard, 15th Earl of Arundel, and his wife Lady Elizabeth Stuart, Philip Howard was related to the royal family through his mother’s line. Howard was brought up in the Church of England. And in 1642, on his way with his grandfather Thomas Howard, 14th Earl of Arundel to the Dutch Republic, he met his grandmother Alethea Howard who was living in Antwerp. Alethea Howard, née Lady Alethea Talbot, was a Catholic refugee living in the Low Countries at that time. Through her influence, as well as that of the Irish Dominican friar John-Baptist Hackett, Philip Howard converted to Catholicism.

At the mere age of 16, Philip Howard joined the Dominican Order in Cremona. Later on, he was ordained in 1652.

Much like how the IS is recruiting Islamist terrorists, Cardinal Howard was recruiting and grooming young men from England, Scotland and Ireland in Belgium into Catholic fundamentalists, with the aim of one day converting England. Belgium was then, just like now, a fertile ground for breeding religious fanatics.

Cardinal Howard first founded the Priory of Bornem (close to Antwerp) in Brabant, with a college for English youths where he was its first prior and novice master. He also founded in Vilvoorde (north of Brussels) a Convent of the Sisters of the Second Order of St Dominic, which later moved to Carisbrooke on the Isle of Wight.

Howard’s dream of a Catholic England was briefly achieved, with the arrival of the Catholic King James II to the throne of England. Yet attempts to depose James in the Glorious Revolution of 1688 won, despite Howard’s machinations backstage to thwart those plans.

With the English throne firmly back in the hands of the Protestants, Howard expressed his deep regret at not being able to have prevent the crisis, but was relieved that ‘anti-Catholic forces’ had not been able to touch his base in Bornem.

The Founding of the English Monastery and College in Leuven

Even on his dying bed, Cardinal Philip Howard was not able to give up his dream of converting England. He died at the age of 64 in Rome on 17 June 1694, and left in his will, the necessary resources to erect a monastery or a college close to the Leuven University for the ‘philosophical and theological study in the Order of St Dominic‘ for students from England.

The Klooster en College van de Engelse Predikheren was founded in 1647 in the Krakenstraat. Its first rector was Dominic Williams.

So how did the Klooster en College van de Engelse Predikheren look like?

According to Edward van Even, the Klooster en College van de Engelse Predikheren was located on the odd numbers’ side of the street, beside the public house ‘Chateau d’Héverlé‘ (Het casteelken van Hever – beside the corner house with Proefstraat).

In the beginning, the English College occupied the building called “Den ouden Wolff”. Later, it expanded towards the market with the houses “Die Horenbeeste” and “Die Houdt Sneppe”.

The college was a group of buildings behind the houses on the Naamsestraat. It had a large entrance on the Krakenstraat, through which leads into a spacious courtyard. This entrance gate still exists today in form.

The Klooster en College van de Engelse Predikheren also had two other entrances: a small alley that leads to the Naamsestraat and a back alley to the Collegeberg. The latter is now the carpark entrance on Number 14 Collegeberg.

The two houses right of the main gate entrance also belonged to the Klooster en College van de Engelse Predikheren, and were rented out to private persons.

It was not a full-fledged monastery, given the limited space, and its role as a college. There was however a chapel in the college, which was spacious and often held ceremonies with much pomp and music. This seems to be an English trait as it was also the same for the English nuns at the Sint-Monicaklooster.

The street in which the Klooster en College van de Engelse Predikheren was located still exists, and is called the ‘Krakenstraat‘ (Cracks Street). Krakenstraat leads from the Naamsestraat to the Oude Markt. Already recorded in 1301, the street name is a bastardisation of the name of an old Leuven trading family ‘van Craeckhoven‘, who was also known in a contract from 1262 as ‘de Cracou‘ (from Kraków). This is a family which originally came from Kraków, Poland, and set up its trading office in the street. At that time, trade relations between Leuven and Kraków mainly focused on the supply of cloth in exchange for furs from Eastern Europe. It is funny how Leuven’s 19th-century historian, Edward van Even, did not know about this, and attributed the name – in French, ‘Rue des Jardins aux Craquements‘ – to the cracking sounds the pebbles made when one walked through the garden of a house located in the street.

The archives show that the majority of the houses on the Even numbers (which were destroyed in the First World War), were properties of the Leuven University. They most likely had direct access to the University Hall through the back.

The Klooster en College van de Engelse Predikheren was said to be directly opposite the house of the University Hall’s concierge, according to Edward van Even.

The Flight of the English Friars

In 1794, French revolutionary troops entered Belgium. The English friars and students at the Klooster en College van de Engelse Predikheren immediately recognised the danger, packed up and left for Britain. The same went for the sisters over at the Sint-Monicaklooster.

They left the college in the hands of a Belgian convert, who was expelled by the French soldiers on 31 October 1796.

For a moment, it was used by the gendarmes and then later rented out to a printing company Michel.

The college was sold in 1804 and the buildings were demolished in 1836, replaced by a private housing.

Only a drawing of the monastery remains today.

Like much of the Oude Markt, the buildings in the Krakenstraat did not survive the bombings in the First World War. Between 1920 and 1927, the whole street had to be entirely rebuilt.

Viscount Charles-Victor de Spoelberch (1836-1907) was the greatest collector of 19th-century French literature. During his lifetime, he was friends with many of the giants of the contemporary French literary world. Upon his death, the French paper ‘Le Figaro‘ described him as:

“Le plus français des étrangers et le plus parisien parmi les Bruxellois, les plus érudits parmi les nobles lettrés, une vie studieuse conduit comme un bénédictin, et l’ apparence conserve une officier de cavalerie”
“The most French of the foreigners and the most Parisian of the Brusselites, the most erudite among the cultured nobility, a studious life led like a Benedictine, and the appearance that of a cavalry officer”

After he died, he left most of his substantial assets to the then Catholic University of Leuven, making it the most significant private donation in the history of the university. His collection of artefacts were salvaged from the fire of the University Library (Lakenhalle) in 1940 and are now exhibited in the the Spoelberchmuseum in the Heilige Geestcollege in Naamsestraat.

His cash donation made it possible to build the ‘Spoelberchinstituut‘ (Spoelberch Institute) in Krakenstraat in 1912.

The Spoelberchinstituut was built beside and partly on the grounds of the former Klooster en College van de Engelse Predikheren. It housed the Faculty of Law, the Faculty of Theology, the library for the School of Political and Social Sciences, the Bible Museum, the Congo Ethnological Collection, and the archaeological museum of Professor Remy.

The Spoelberchinstituut is still part of the KU Leuven. The original garden of the Klooster en College van de Engelse Predikheren has now been turned into a carpark for the building. The main gate entrance on the Krakenstraat still retains its original form, although replaced by a wrought iron gate in 1953.