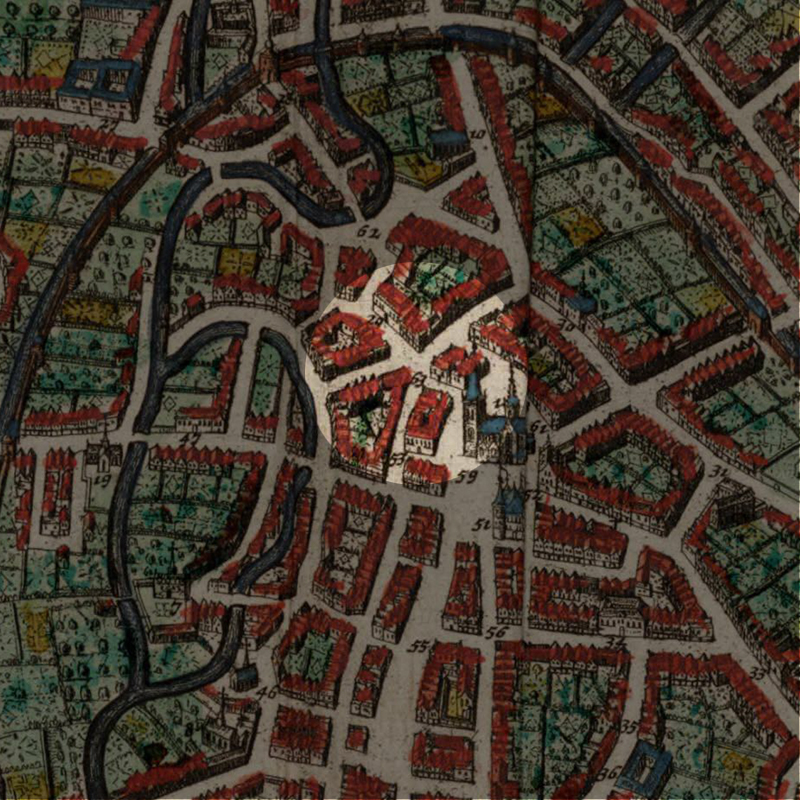 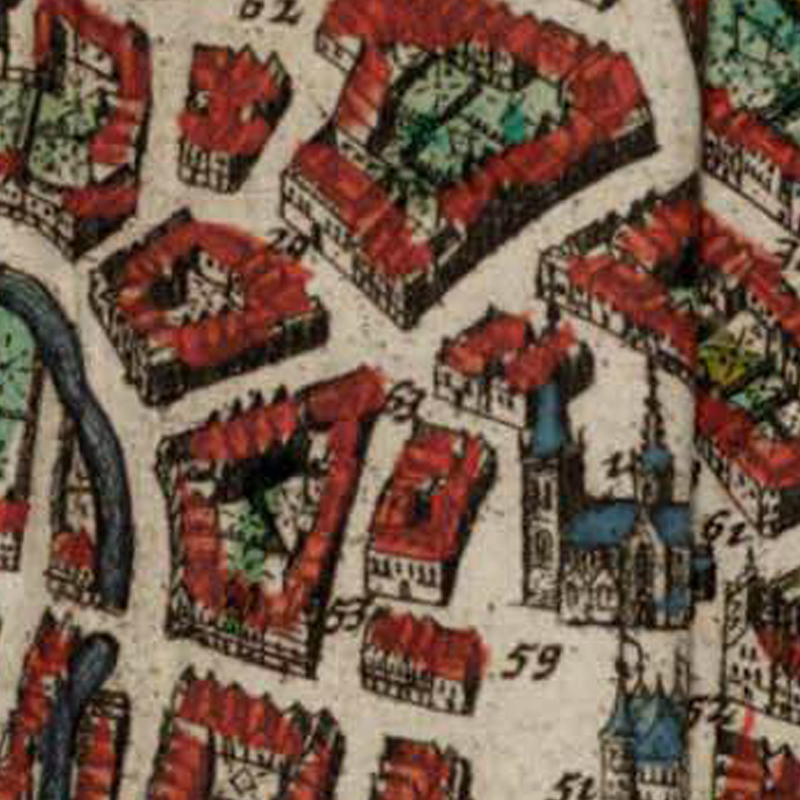 The Pensstraat used to be the place where the Pensmarkt took place. Known in the earliest written records in 1253 as ‘Panchestrata‘, the name slowly evolved to be ‘Peenstrate‘ in 1370.

Part of the “Seven Corners of Leuven’s Meat District”

The Pensstraat leads from the Brusselsestraat to the square known as the ‘Mathieu de Layensplein‘. Leuven’s inhabitants still call this square the ‘Zeven Hoeken‘ (Seven Corners). This is because it was the area is enclosed by seven street corners with the Leverstraatje, the Pensstraat, the Schrijnmakersstraat and the Jodenstraat.

The Pensstraat also led directly up to the Vleeshuis (Meat Market), which stood right in front of the Sint-Pieterskerk.

Up until the First World War, the Zeven Hoeken was Leuven’s Meat District (Slachthuiswijk).

It was unsanitary and smelled really bad, and many of the rubbish and rotten meat found themselves in the nearby Dijle river.

In August 1914, Leuven was nearly completely destroyed by the invading Germans. The university library was burnt down. The Tafelrond was ruined. The Sint-Pieterskerk was reduced to its bare bone foundations. The Vleeshuis – together with the Pensstraat – was so completely burnt that there was absolutely nothing left.

It was then that the city took the decision to turn this into an open space called ‘Parvis Saint-Pierre‘. In 1940, the space was renamed ‘Mathieu de Layensplein‘ to honour the city’s renowned architect.

After the dreadful destruction of 1914, the city administration decided to make use of the opportunity to sanitise the whole Meat District, which was their plan for a long time, since the area was dirty, unhygenic and very poor – right in the centre of the city.

Already in 1781, the slaughterhouses in the Slachtstraat were centralised in a building further down the road in the corner between the modern-day Amerikalaan and Lei. This was initiated by the mayor Jan Laurent de Vroye, and was the first central public slaughterhouse in Belgium. In 1908, an even larger building was erected along the Kapucijnenvoer, and this moved the slaugherhouse to the outlying quarters of the city.

With the meat business moved outside the centre of Leuven, the tripes stalls in the Pensstraat also went away.

As much as I would like to fantasize about Leuven’s famous butcher ‘Rondou‘ being a survivor of the meat business here since the 13th century, it is not.

Slagerij Rondou started its business in Oud-Heverlee in 1946 and moved to their current spot in the Pensstraat in 1965. The family worked really hard through those decades, against the rise of supermarkets, in order to keep the trade alive. Their struggles were the inspiration of the 2009 TV drama series ‘Van Vlees en Bloed‘ (Of Meat and Blood), and the butcher shop became an instant star throughout Belgium.

Today, it still serves high quality meat and has kept its familiar personal touch in spite of its fame. It is also the favourite butcher of Belgian TV chef Jeroen Meus.

Today, the Pensstraat is a pleasant little street that connects the Brusselsestraat and the Mathieu de Layensplein. Fortunately, the smell and sight of tripes with encircling flies are no longer present. It is one of the few places left in Leuven where you can experience the charm of thriving local small businesses.