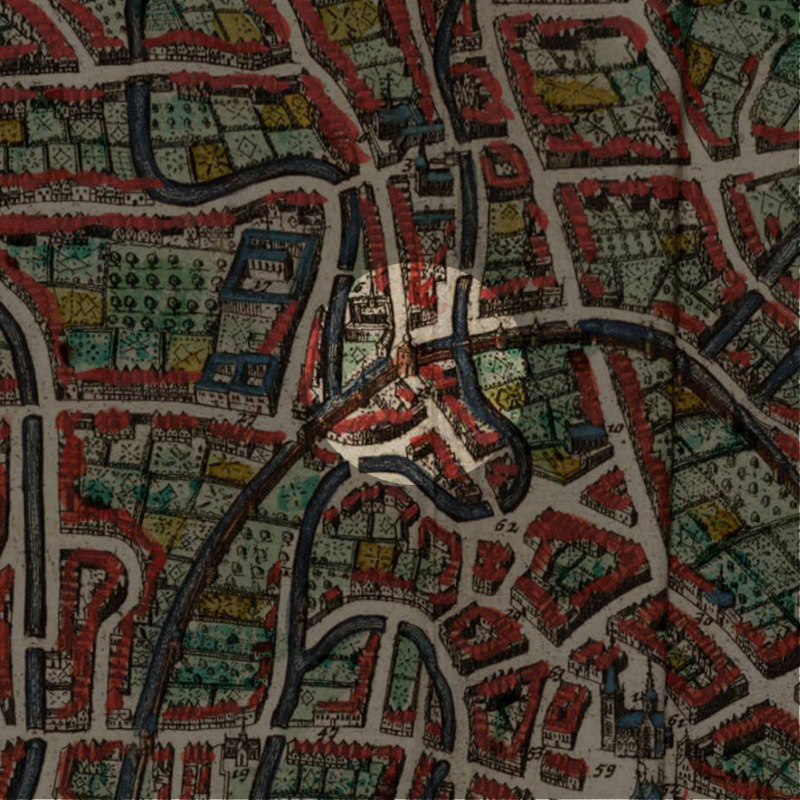 Founded in 1427 by Godfried van Gompel and Herman Brant – both Professors of the Arts, the Pedagogie De Burcht was first a rented house but moved its permanent location on the Borchtstraat. The Borchtstraat was the street that led from the city centre to the Castle of Leuven (modern-day Keizersberg), which later changed its name to Kasteelstraat, and today it is called the Mechelsestraat.

The college expanded rapidly after the death of its founders and occupied a substantial size on the right side of the street, just before the first and inner city wall and the now-demolished Borchtpoort city gate.

The Pedagogie De Burcht was one of the four colleges within the Faculty of Arts. Students had to live and study there, where they received the exact same education as in the other three colleges. The arts were considered a foundation course, after which students can move on to higher courses such as theology or ecclesiastical law. So strictly speaking, this was a Paedagogium not a Collegium.

The other three pedagogies were: Pedagogie de Lelie (the Lily), Pedagogie de Valk (the Falcon) and Pedagogie het Varken (the Hog).

The motto of the Pedagogie De Burcht was “Castrum bella gerit“, meaning “the Castle wages wars‘

There were many famous alumni of the Pedagogie De Burcht, such as:

Under the French Revolution, the law of 15 September 1793 abolished all higher education institutions in the French Republic. With the Treaty of Campo Formio signed by the Holy Roman Empire and the French Republic on 17 October 1797, Austrian-Habsburg Netherlands (modern-day Belgium) were ceded to France, thus subjected the University of Leuven under the law of 1793 to be abolished.

In 1807, Pedagogie De Burcht was sold to a certain Ignace-Joseph Savary from Lille. The whole building was knocked down, with a part sold to private housing and the rest served to widen the Mechelsestraat until the bridge of Oratoriënbrug.

At the level of Number 88 Mechelsestraat, just before you reach the river, used to be the site of the Borchtpoort citygate. The houses on your right all used to be the Pedagogie De Burcht.

It is interesting to know that a Gnostic Christian esoteric sect founded in the Netherlands in 1935 set up a branch here in one of the houses. They call themselves the “Lectorium Rosicrucianum” or the “International School of the Golden Rose Cross”.