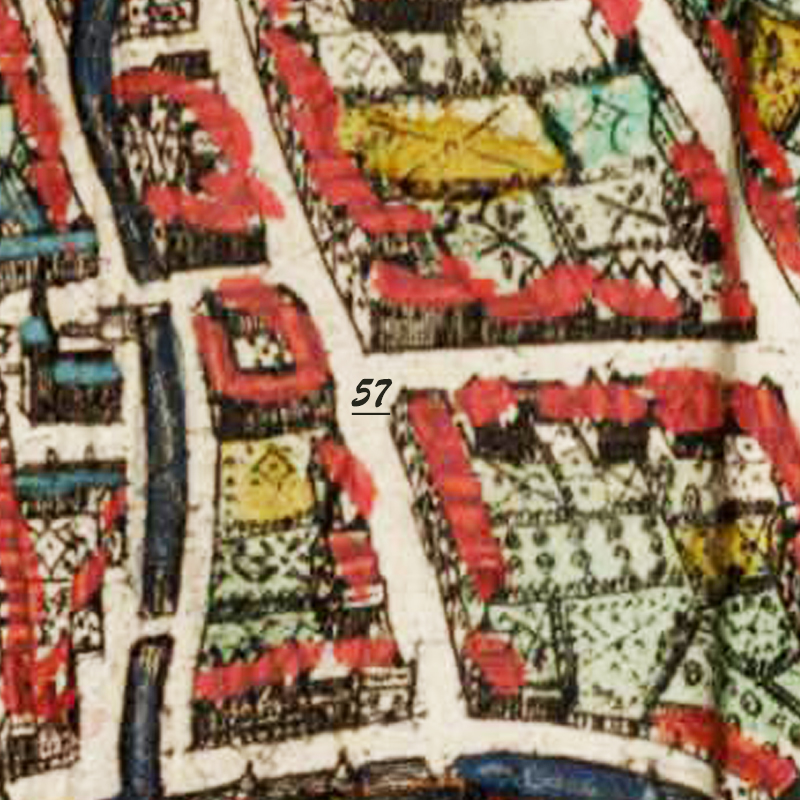 What is a “Mons Pietatis”?

The concept of Mons Pietatis developed in 15th century Italy, as a form of charity and a religious movement against money-lending. Operated by the church, every town and city had a “mons pietatis” to lend money to citizens with low interest, with a deposit of something of value, such as jewelry, silvery, artwork or even books.

Known in Dutch as the “Berg van Barmhartigheid“, this form of loan was banned by the law of 1848. The only existing Mons Pietatis left in Belgium is the one in Brussels.

Between the Mountain and the Lombards

The street by which we know today as “Lombaardenstraat” was known as early as 1564 as the “Lombaerde straetken“. Its other name was “Bergstraat“, which was also used from the Middle Ages up until as recently as 1998.

Why the reference to Italy’s Lombards? The building in the corner with Vaartstraat (known before 1750 as the “Coestrate” – Cow Street) was a house that was called ‘d’Oude Munte‘. When Leuven’s Mons Pietatis called “Lombaerde” moved into this building, locals started calling this street the ‘Lombaardenstraat‘. So in fact, it has nothing to do with the Lombards at all.

There is also another reason for the street’s alternative name, ‘Bergstraat‘:
Since the Dutch translation of Mons Pietatis is “Berg van Barmhartigheid“. This is why Lombaardenstraat was also called the “Bergstraat” although there was clearly no mountains in sight.

In a city decree dated 27 October 1594, the Lombaardenstraat was mentioned as a ‘little street‘ but apparently without a formal name:

According to city plans, the Lombaardenstraat alias Bergstraat was underdeveloped until around 1810-1820. After this,  a brewery called ‘Breda’ was built in the houses behind the Mons Pietatis. This brewery was later cleared in the recent decades to make way for the supermarket Colruyt and the streetside building adjoining the Mons Pietatis site all became student housing.

Numbers 66-70 (used to be 62-66) Vaartstraat occupy the site of Leuven’s former Mons Pietatis. The buildings were built in 1845. It is nowadays a law firm.